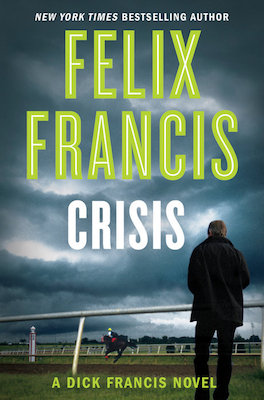 The following is an exclusive excerpt from Crisis, by Felix Francis, and the latest to continue his father Dick Francis’ beloved mysteries, all centered on the horse racing world. In the following passage, we learn of a tragedy in a stable, with sinister implications for the racing community.

I didn’t need to receive the brief to know what I was going to. “Prince of Troy Dead in Stable Fire” read all the headline banners at the newspaper stands in King’s Cross.

Even I had heard of Prince of Troy. He was the current wonder racehorse, described by most as the best since Frankel. Some even said he was better.

I picked up the early edition of the Evening Standard and scanned the front page with its large “Prince of Troy Dead” headline. According to the report, the horse had been a sure thing for the Derby in just over two weeks’ time, having swept aside all other contenders with consummate ease in his eight previous races, including in the Two Thousand Guineas, the first Classic of the season, just nine days ago.

But now he was gone, apparently roasted alive while standing in his stall. And, it seemed, he had not perished alone. The paper stated that six other top colts had died alongside him in the huge blaze that had rapidly engulfed a whole stable block overnight, fanned by a strong northerly wind coming straight off the Fens.

“An  immeasurable loss to racing,” the paper went on, “and  a personal tragedy for the trainer of the seven horses, Ryan Chadwick, and the whole of the Chadwick family.”

I tucked the newspaper under my arm, bought myself a take-away coffee from Starbucks and found a seat at a table on the next fast train to Cambridge.

Wireless internet on trains was still pretty variable so Simpson White supplied all operatives with a dongle that effectively turned a laptop computer into a large cell phone.

I downloaded my emails, including the one from Georgina with the brief.

Ryan Chadwick was not our client, as I had expected, nor indeed any of the Chadwick family. It was my old friend His Highness Sheikh Ahmed Karim bin Mohamed Al Hamadi, known universally as just Sheikh Karim, and he had been the owner of Prince of Troy.

Article continues after advertisement
Even I had heard of Prince of Troy. He was the current wonder racehorse, described by most as the best since Frankel. Some even said he was better.

Ahmed Karim had been a vibrant, carefree Arab crown prince of twenty-two when his father, the ruling emir, had been assassinated by his generals for thwarting their attempts to go to war once again with a neighboring state. The new young leader had purged the army of his father’s murderers, made lasting peace in the region and had dragged his oil-rich nation out of the Middle Ages and into the twenty-first century. Just thirty years on, it was now one of the leading financial and tourist centers of the Middle East.

But he hadn’t done so without the occasional crisis and challenge to his leadership. His rule was fair but firm, with firm being the appropriate word, and there had been a few scandals when overzealous officials in his administration had overstepped their authority, especially in dealing with tourists from more liberal European cultures. Hence, he and I had worked together twice before.

The brief outlined how Sheikh Karim had steadily built up a string of top-rated racehorses and it was his intention to eventually rival other Arab royal owners. He had sent his first two-year-old to the trainer Oliver Chadwick only nine years ago and now had some twenty Thoroughbreds in training in several countries.

His UK operation was still largely based at the Chadwicks’ Castleton House Stables on Bury Road in Newmarket and he had been anticipating his first Derby success with  Prince of Troy.

The brief made it clear that I was to act as Sheikh Karim’s representative and to liaise with Oliver Chadwick directly. He’d been told to expect me.

Oliver, it seemed, was Ryan’s father and the current head of the Chadwick racing dynasty. Georgina had also added some basic background information on the Chadwicks, including a link to an article in the Racing Post written five years previously when Oliver had retired and Ryan had taken over as the trainer. Oliver Chadwick was himself the son of one Vincent Chadwick, who had bought Castleton House on Bury Road soon after the Second World War. He had built the first stable yard and started training racehorses in 1950.

Oliver’s elder brother, James, had initially taken over the training license when their father was killed in a car crash in the early 1970s, but it had passed to Oliver when James emigrated to South Africa only four years later.

Over the next thirty years, it was Oliver who built the reputation of the business until it was considered that Castleton House Stables was one of the finest racehorse training establishments in the country, with a list of owners that included not just Sheikh Karim but also the great and the good of British racing.

But Oliver had clearly been busy in other ways as well. The brief stated that he’d been married three times and he’d had two children with each of his first two wives—three sons and a daughter in all. Of the four, the three boys were still active par- ticipants in the racing industry.

Ryan, the eldest at forty-two, had been a two-time former champion jockey who had ridden many of Oliver Chadwick’s greatest training triumphs, including winners of the Derby, Oaks, St. Leger and the Breeders’ Cup, before retiring from the saddle through injury and taking over Castleton House Stables from his father.

Declan, the second son by two years, had also been a very successful but not quite a champion jockey before following Ryan’s move into training. He currently ran a small yard on the outskirts of Newmarket and was just starting to make his mark as a possible star of the future.

Next by age, at thirty-two, was Tony and he was the only one of Oliver Chadwick’s offspring who was not married. He was still riding as a jockey, although he had never reached the dizzy heights of either of his older brothers, although, according to my newspaper, he had been widely expected to partner Prince of Troy in the forthcoming Derby.

The youngest, at twenty-nine, was Zoe, the only Chadwick daughter. Even though her married name was Robertson, she apparently sometimes referred to herself as Zoe Chadwick. She had moved away from Newmarket to London aged just eighteen, got married at twenty and now lived with her husband and two young children close to South Ealing Tube station.

Georgina had made a note in the brief that Zoe’s husband was called Peter and he was believed to be a realtor, but lack of time had prevented anything further from our in-house researchers.

I leaned back in my train seat and watched the world rush by at a hundred miles per hour. I actually thought that the research team had done remarkably well in the very short period available, but what the brief failed to tell me was that intersibling civil war had broken out big-time in the Chadwick family.

I would only find that out when I arrived at Newmarket.

Bury Road was closed in both directions, blocked by three large red fire trucks from which snaked big fat hoses full of high- pressure water. In addition there were two television news vans with large satellite dishes open on their roofs. Camera crews and presenters milled around aimlessly, waiting, no doubt, for the next news bulletin and another report.

The driver that Georgina had arranged to collect me from Cambridge station dropped me as close as he could get to the gates of Castleton House Stables. He jumped out first and opened the rear door of his smart black Mercedes and waited for me to emerge.

But I have no idea how long I’ll be.”

“I’ll be waiting,” said the driver. “Be as long as you like. I’ve got a good book to read. You can leave your bag in the trunk if you want.” 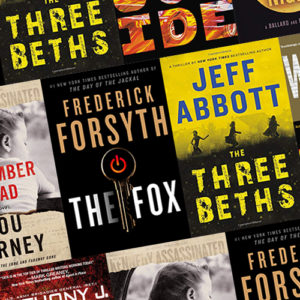 October's Best New Thrillers Coming off an amazing summer of new releases and the return of iconic characters like Mitch Rapp in September, October is going...
© LitHub
Back to top