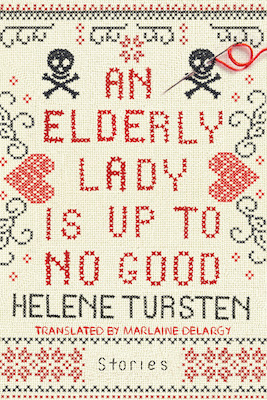 The following is an exclusive excerpt from An Elderly Lady Is Up To No Good, a new story collection from Swedish crime writer Helene Tursten, translated by Marlaine Delargy. In this wicked new collection, 88-year-old Maud is not to be underestimated when it comes to revenge, or even a little murder. In the following passage, Maud encounters a cheating antique dealer.

The street was deserted, and only a few cars were parked in the designated spaces. The air was shimmering over the warm tarmac when Maud stepped out of the front door of the apartment block. It was like walking into a sauna, but she was used to the heat. In her blue summer dress and a thin cotton cardigan, she felt cool. She was wearing white sandals and carrying a pale-beige purse. She saw Frazzén emerge through the glass door of his shop, engraved with the words: GOLDMAN’S ANTIQUES, EST. 1950, SUCCESSOR W. FRAZZÉN, EXPERT IN GOLD & SILVER. The antique dealer was kitted out in a dark-blue suit and pink shirt and looked as if he was going straight from work to some kind of dinner dance. Impractical and too warm in this weather, Maud thought.

She reached him just as he turned the key in the last security lock. He gave no indication that he’d seen her as he pulled down a heavy metal grate that covered both the door and the shop window. Then he pressed a little round object attached to his key ring, and Maud heard a loud beep. The lock responded with an audible click, confirming that the store was well and truly closed for the day.

He then turned to Maud and quickly looked her up and down.

“Electronic lock,” he informed her, nodding in the direction of the grate.

“Absolutely—in fact I’m on vacation for the next three weeks,” Frazzén replied, favoring her with a dazzling white smile.

Those veneers must have cost you a fortune, she thought, pursing her lips, but of course she didn’t say it out loud.

“I believe you’re an expert on precious metals, herr Frazzén,” she began as she fumbled with her purse zipper, which had caught on the fabric. When she eventually managed to get it open, she reached in and brought out a small item wrapped in newspaper. Frazzén’s expression was skeptical as she produced the little silver goblet, but his eyes widened when he saw the beautifully decorated artifact with its gilded interior. His hand trembled as he took it from her. He reached into his inside pocket and took out a small case containing an eyeglass. He brought it up to his eye and examined the mark on the base of the goblet.

“Excellent . . . excellent. French . . . royal provenance,” he murmured to himself. Reluctantly he handed the goblet back to Maud and fired off another blinding smile.

“Did you want this appraised, or are you hoping to sell it?”

Maud explained her father’s predilection for antique silver and said she had decided to sell the lot. Frazzén didn’t even try to hide his interest in seeing the entire collection. Unfortunately he didn’t have time to pop up to Maud’s apartment at the moment.

“A few of us are having a kind of memorial celebration for a friend who died recently. He lives—lived—in Australia, so none of us were able to get to the funeral.”

That explained the dark suit, but was it really necessary to wear something like that when the weather was so warm? Maybe so, if it was a memorial, Maud thought. She decided not to get hung up about his clothes.

“And as I said, I’m away for three weeks from tomorrow; I’m driving down through Europe then on to England on a combined vacation and business trip,” Frazzén added.

Maud thought fast. “Will it go on until late? The memorial, I mean.”

Even if that smile was heartfelt, there wasn’t the slightest hint of warmth in his eyes; Maud saw only cold calculation.

“No, we’ll be finished just after eight. The other guys are involved in a yacht race in Marstrand tomorrow; they have an early start, so they need to get a good night’s sleep.”

“Is there any chance you might be able to come around after the memorial?” she asked.

Frazzén didn’t even think about his response. “I’ll be there by nine at the latest,” he said immediately, with yet another beaming smile. Even if that smile was heartfelt, there wasn’t the slightest hint of warmth in his eyes; Maud saw only cold calculation. That little goblet had aroused his greed. Good, she thought. It’s going to cost you.

The doorbell rang at precisely nine o’clock, and Maud let Frazzén in. He had obviously come straight from the memorial because he was still wearing the dark-blue suit. His limp handshake was warm and damp, like a wet dishcloth, and he was surrounded by an unpleasant miasma of men’s fragrance and sweat.

“I brought this along—I just happened to have it in the car,” he said, holding up an oversized bag.

That wasn’t quite what Maud had been expecting. She’d thought he would simply give her an appraisal that evening; she had no intention of handing over the collection until she’d received the money. A seed of suspicion began to grow inside her. How serious was this guy? She remembered how those cold, calculating eyes had fastened on the silver goblet. How reluctant he had been to hand it back to her. She was going to have to watch him, even if he was a TV star. Or maybe for that very reason.

Without a word Maud turned on her heel and indicated that he should follow her. In her peripheral vision she could see Frazzén’s head moving from side to side as he tried to take in all the antiques they passed on the way to the gentleman’s room. She could almost hear the calculator clicking away inside his brain. Most of the furniture was draped in white sheets, but he could see the paintings and some of the ornaments.

The room lay in darkness because the apartment block was undergoing a facelift. It was surrounded by scaffolding and enveloped in a protective sheet that blocked the natural light. Maud went in and switched on the light. Frazzén stopped in the doorway and gazed around. Then he looked at her, flashing those goddamn veneers.

“Fantastic! A room that hasn’t been touched for a hundred years!” he exclaimed with delight.

Maud simply nodded. It was true, she thought, time had stood still in this room.

Article continues after advertisement
It was true, she thought, time had stood still in this room.

The antiques expert strode over to the display cabinet. He couldn’t suppress a gasp, but when he turned to Maud, his face registered nothing more than polite interest.

“This looks quite promising, but it might take me a while to go through everything. Could I possibly have a glass of water? Or a coffee, if you don’t mind?”

She’d had no intention of offering him anything, but it had been a very warm day, and he was bound to be thirsty.

“I’m out of coffee. I only got home this afternoon after a month overseas, and I haven’t had time to go shopping. I’d be happy to fetch you some water, if that’s okay.”

“That would be wonderful!”

Maud headed for the kitchen, leaving the door of Father’s room ajar. It was a trick she’d learned as a child. When the gentlemen were sitting in there bragging over a glass of whisky and smoking fine cigars, she would creep up and peep in through the gap by the hinges. She had heard many scabrous tales that way, and no one had ever caught her.

She crossed the dark parquet floor of the salon, making as much noise as possible with the heels of her slippers. When she reached the other side of the room, she quickly slipped them off and crept back, keeping as close to the wall as possible because the floor didn’t creak there.

When she peered through the gap, her suspicions were confirmed.

Frazzén had taken out the impressive candelabra adorned with crystal prisms, along with the little seventeenth-century silver goblet, and placed them on the smoking table. But he was no longer examining them; instead he was standing in front of the Zorn painting. He glanced over his shoulder toward the door. Maud held her breath and didn’t move a muscle. Once Frazzén had reassured himself that he was alone, he turned his attention to the picture once more.

Maud felt a surge of ice-cold fury. That revolting man was planning to swindle her. As if it wasn’t enough that he was clearly set on taking the most valuable silver pieces with him today, he was also intending to steal the Zorn.

Slowly she slithered backward in her stocking feet. Behind her was a large tiled stove that used to heat the salon, and beside it stood a heavy gilded bronze companion set consisting of a poker and a small brush and shovel for clearing out the ashes. Silently she unhooked the poker and shuffled back to the door.

Frazzén was just reaching up to take down the painting when Maud made her move.

Crime and the City: Edinburgh

What We Owe to Wilkie Collins' The Woman In White 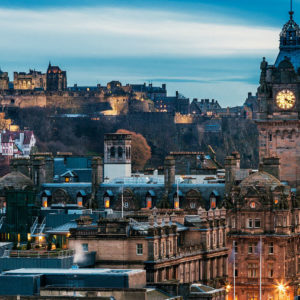