Crime and the City: Edinburgh

Scotland's Capital Stakes its Claim as a Mystery Mecca

Yeah, I know what you’re thinking. This Edinburgh Crime and the City is going to be all about Rankin and Rebus. Well, a bit of it is, and Rebus does cast a long shadow emerging from The Oxford Bar, slightly hungover at St Leonard’s Police Station and always with that lovely old Saab 900 of his. But there’s more to Edinburgh. How about Robert Louis Stevenson and The Strange Case of Dr Jekyll and Mr Hyde (1886); it’s set in London, but Stevenson was an Edinburgh man. And we can’t forget that Sherlock Holmes was the product of a Scottish writer inspired by an Edinburgh pathologist. While we’re at it Alexander McCall Smith may write about those ladies and their number one detective agency in Botswana, but, in real life, he’s Emeritus Professor of Medical Law at the University of Edinburgh. There are also the foreign writers with an obsession about the Scottish capital. The prolific French crime writer, Frederic Dard, only now getting his due in English translation, set his The King of Fools (1952) in Edinburgh. French gambler Jean-Marie becomes entranced on the French Riviera with Marjory whom he pursues back to her hometown where he finds himself a long way from home in the cold grey-granite city caught in the middle of a crime passionel.

We also can’t entirely dismiss Edinburgh’s (probably) most famous writer Muriel Spark. Ian Rankin, incidentally, spent three years writing a PhD thesis on her, though never finished it. Her first novel The Comforters (1957) involves an old lady smuggler in rural Sussex; Momento Mori (1959) is based around a circle of upper-class Brits all being told anonymously, “Remember you must die”; The Bachelors (1960) is all about forgers and blackmail; a murder is at the heart of both The Girls of Slender Means (1963) and The Driver’s Seat (1970). There’s a fair bit of what we today would call gaslighting in The Hot House by the East River (1973); burglary and embezzlement are the core of The Takeover (1975) and feature too in Symposium (1990); threatening letters are central in A Far Cry From Kensington (1988); strange unexplained disappearances in Reality and Dreams (1996); Aiding and Abetting (2000) harks back to the infamous Lord Lucan case (a peer of the realm, he murdered his family’s nanny in London in 1974 and then disappeared, never to be heard of again in one of England’s greatest unsolved crimes). Indeed it’s hard to find a Spark novel without some sort of murder or misdemeanour at its heart. Spark’s centenary is this year and to celebrate her achievement the independent Edinburgh publisher Birlinn has reissued every one of her 22 novels with introductions from the likes of Rankin, Ali Smith, Andrew O’Hagan, William Boyd, and other writers and poets. If you haven’t read her before, or only know The Prime of Miss Jean Brodie (1961), then this is the perfect opportunity.

And so a quick dive into Rebusshire, just in case there is anyone reading this who has never heard of Detective Inspector John Rebus. Born and raised in the Kingdom of Fife, he is ex-special forces with a couple of tours in the badlands of Northern Ireland, as working class as they come, and a loyal(ish) servant of Lothian and Borders Police (now dissolved into the much large Police Service of Scotland). Rebus stands firmly in a number of traditions: the Scottish hardman; the heavy drinking and smoking cop; the failed husband. But he’s also a pretty solid mentor, honest as the day is long (though sorely tempted occasionally) and a damn good copper. His diet is terrible (biscuits, sugary tea and whisky mostly); his taste in music is excellent, though distinctly vinyl. Over the years Rankin has retired him (as the character naturally hit the enforced retirement age for a cop in Scotland), but then brought him back to work some cold cases.

Where to start with Rebus? Well, you could do worse than the very beginning, Knots and Crosses (1987), and work your way through to the most recent Rebus, In a House of Lies (2018). As a Rebus loyalist I honestly don’t think there’s a duff one in the series. I will though highlight one outlier—a slightly different Rebus—Black and Blue (1997) which suggests that the real-life late-1960s Glasgow serial killer Bible John (who was never caught in real life) may have fled and now returned to Scotland. The Bible John case is Scotland’s most notorious unsolved triple killing and it’s still constantly recycled and speculated upon, most recently in Liam McIlvanney’s brilliant The Quaker (2018). But that’s Glasgow, another city entirely. Back to those writers wandering the narrow wynds of old Edinburgh…

Ian Rankin isn’t the only Scottish crime-writing colossus to walk the mean streets of Edinburgh. Val McDermid (and if Rankin is the King of Tartan Noir, then McDermid is the undisputed Queen) is one of the few crime writers that can give Rankin a run for sales and output. McDermid is amazingly prolific and the doyen of the entire UK crime writing scene. Her Karen Pirie psychological thriller series features a Detective Inspector with Scotland’s Historic Case Unit (HCU). (McDermid is herself is an expert in forensics and has written an excellent book on the subject.) The third book in the Pirie series, The Skeleton Road (2014) takes Pirie to Edinburgh when a skeleton is discovered hidden at the top of a crumbling, gothic building. The next in the series, Out of Bounds (2016), returns to Edinburgh. The Pirie/HCU series continues with the recently published Broken Ground (2018). Of course, McDermid is best known for her Carol Jordan and Tony Hill series, which has a TV adaptation called Wire in the Blood.

And some other Edinburgh crime novels well worth reading:

And, as ever, finally a serious “must read” recommendation if you’ve been succumbing to the idea of Edinburgh as Victoriana gothic playground or charming tourist city. Tony Black’s Gus Dury books are set amid Edinburgh’s seamy underbelly of drink, drugs, and poverty. Gus, a one-time high-flying journalist has lost his wife and sunk into a bottle and finds himself doing a bit of investigative work for a friend. Paying for It (2008) takes Dury into the doss houses, bleak estates and people-trafficking gangs of Edinburgh that would have Rebus calling for backup and even Irvine Welsh’s Franco Begbie feeling nervous. Things don’t get any lighter in Gutted (2009) where a murdered child leads Dury to dogfights on the outskirts of the city. In book three of the series, Loss (2010), it seems Dury is pulling his life together. But then his brother is shot dead. Once again the whisky bottle, and some vengeance, seem mighty appealing. In the fourth and final Dury novel, Long Time Dead (2011), Gus is back on the booze and dealing with someone murdering students at Edinburgh University.

The whole Gus Dury series, like Rebus and much other Edinburgh crime writing, is often a trip to the dark side of the city the tourists (hopefully) never see. Yet crime writing is now also a major attraction to the city. On my last visit I counted at least half a dozen, or more, Rebus-themed Edinburgh tours. And then there’s the Trainspotting Walking Tour that claims, to “guide you (safely) through the landscape of Irvine Welsh’s masterpiece Trainspotting.” Dark tourism indeed. 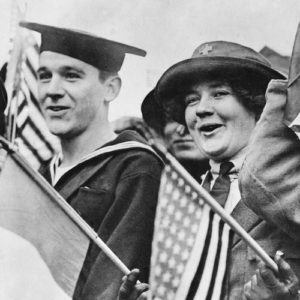 This Sunday will mark 100 years since the end of World War I on November 11, 1918, an occasion still celebrated (in France,...
© LitHub
Back to top