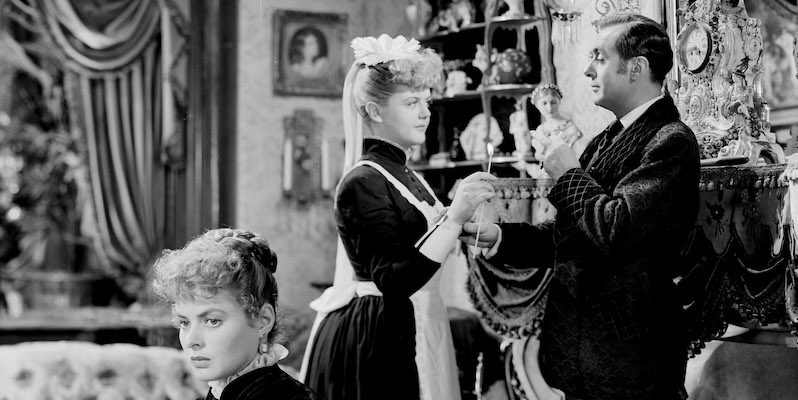 The scene is in black and white: a Victorian bedroom with a squared-off canopy bed is lit by flames from the sconces on the wall. Suddenly, those flames sink, the room dims, and the chandelier in the center of the ceiling shudders.  Someone is upstairs, walking back and forth.

But the young wife who sees all this knows it’s not really happening.  It’s her imagination. She knows it’s her imagination because her husband has told her so, many times. Just like he told her that she was getting so strangely forgetful when she insisted her gloves and umbrella were not where she had left them.  Except he finds them easily and says he saw her put them down.

He loves her so much, he tells her.  He’s so very worried about her. But he’s also angry because she’s becoming an embarrassment. She’s so nervous all the time. She can’t even leave the house without getting lost or causing a scene.

This is all true. She knows it’s true, because he’s told her it’s true.  Many, many times.

Those who have seen the film will recognize this description of Gaslight, starring Ingrid Bergman, which has given its name to a very real and pervasive practice.

Gaslighting is a common aspect of abusive relationships, both in fiction and in real life.  An abuser uses a variety of methods to keep the victim confused and off-balance. Some tactics come straight out of the old movie, just updated for modern technology. Abusers are using internet-connected speakers and thermostats to suddenly blast music at their victims, or to abruptly and invisibly raise or lower the temperature. They use phones and computers to spy on them.

This sounds nuts. Nobody would go through all that trouble.

But that’s precisely why it works. When a victim tries to tell someone what’s happening to her, she sounds crazy. It is perfectly natural for a listener to react with doubt. Who would put so much effort and creativity into making another person miserable?

In the popular imagination gaslighting is a one-on-one game. There’s the abuser, and there’s the victim.

This is where gaslighting gets complicated and truly scary. In the popular imagination gaslighting is a one-on-one game. There’s the abuser, and there’s the victim. He (and it usually is a he), lies to her and manipulates her environment through a series of “tricks,” maybe even enhances her confusion with drugs or alcohol.

But the men that psychologist Don Hennessy describes in his book How He Gets Into Her Head, aren’t just playing one-on-one. These men, whom he refers to as “intimate abusers” or “skilled abusers,” use others to reinforce their victim’s isolation. The skilled abuser will tell people who might be inclined to help the victim—family members, friends and, yes, therapists—that he’s very worried about his victim. She’s lashing out all the time. She’s drinking. She’s making wild accusations. She’s insanely jealous and accusing him of cheating on her if he even looks at somebody else. She hit him.

This might even be happening. Except it is all things he’s doing to her.

But the abuser is able to present a coherent story. He can fine tune the tale and his presentation. He appears entirely reasonable. That’s because he’s the one who knows what’s really going on.

On the other hand, when the victim tells her story to the outside world, she might well look disheveled, frightened, doubtful.

He looks trustworthy. She doesn’t. The skilled abuser knows that perception is everything.

Lundy Bancroft describes this phenomenon in the book Why Does He Do That? She talks about the men who have been sent to her for therapy who set out to charm. They describe themselves as overflowing with love for the women in their lives. They can’t understand what’s happened. Or, they say do understand and they’re sorry. They just “broke” or “lost it,” but only because they love her so much. They just want things to get back to normal.

What’s really happening here is that the abuser is trying to create a sympathetic impression in the therapist, so that when the woman—who is exhausted, frightened and confused—tells her side, it is the reasonable-seeming abuser who is believed.

It’s an act, and it’s one that they’ve perfected, sometimes with multiple women and their friends and family, across multiple years. They do it because it works. They know it does. Society set them up for it.

Women are primed for gaslighting at an early age. When a little boy taunts a little girl, or punches her, or pulls her hair to make her cry, she’s told things like: He doesn’t really mean to hurt you. He just wants your attention. You should be nice to him.

Do we stop and think how confusing is that for a girl?  Hitting, name-calling, and hair-pulling hurt. But the little girl is told affection involves someone deliberately causing her pain, and she can make it stop by being nicer, paying more attention, trying harder.

So, she learns to doubt her judgment, and she learns that when she’s in trouble, she’s the one who has to work to make it better. Alone.

The boy in this scenario is also learning some fundamental lessons. He learns nothing will happen to him when he hurts a girl. In fact, on some level, it’s expected.

One of the most popular recent examples of gaslighting in fiction is The Girl on a Train.  In Paula Hawkins’s novel, the main character’s ex-husband repeatedly tells her that she is overreacting, and wrong, about what she’s seen.  And there’s obvious proof that her perceptions must be skewed—she drinks.

Any woman who doesn’t fit society’s standards of what’s “appropriate” is automatically doubted. And those are precisely the women who often need our help the most—women who have been abused or incarcerated or addicted to drugs or alcohol. Her past becomes an additional reason for the bystanders to distrust what she says.

Her abuser uses all this against her.

This is also what happens in A.J. Finn’s The Woman in the Window. Here, the narrator is is in double trouble. She is obviously, demonstrably, mentally ill, and she is self-medicating with pills and booze. Her gaslighter takes full advantage of her precarious situation. They use her own loneliness and desire to help against her, but turn around and use the outside world’s perceptions of her to keep from being discovered.

Gaslighting in psychological thrillers, as in real life, is of course not limited to the dynamics of couples. In my new book The Other Sister, a father gaslights his daughters and his wife. He feeds each one of them a different stream of lies to play them off against one another and prevent them from uniting against him. He even has a separate set of lies about his family that he reserves for the larger community. That way, they’ll keep looking at the women as the source of the problems, not him.

But isn’t all lying gaslighting?  Everyone who lies is trying to manipulate somebody else, right?

Bunny Lake Is Missing, an Otto Preminger film based on the book by Evelyn Piper, also shows gaslighting at work outside of a marriage.  In this story, an unwed mother moves to a city where she is completely unknown.  On the first day of nursery school, her child vanishes so quickly and completely that the people surrounding her, including the schoolteachers and the police, start to think the child never existed.  The kidnapper plays a double game.  He tells the woman he supports her, that he’s doing everything in his power to help her.  But he is also telling the police and the school and everyone else that the child is a figment of her imagination.

Social Creature by Tara Isabella Burton brings the complexity of gaslighting into the twenty-first century. In that, the narrator makes heavy use of social media to manipulate her victims and conceal her actions and her desperation. She’s primarily gaslighting her boyfriend, but she’s also gaslighting the person who is paying her bills. There’s a murder eventually, and the gaslighting continues, to keep the money, friendships, and social standing in place.

This example starts to move the situation of gaslighting from abuse into a con game. But the essentials remain the same.  Lie to control, lie to confuse, lie to present a plausible, sympathetic persona that people will trust. Lie to get and keep that thing (or that person) you want.

But isn’t all lying gaslighting?  Everyone who lies is trying to manipulate somebody else, right?

Well, yes and no. There’s lying to conceal a fact or action—like in Liane Moriarty’s The Husband’s Secret.  The titular husband has been lying to his wife for years, but he’s not otherwise trying to convince her that her perceptions are mistaken.  True gaslighting happens when the intent is to confuse, isolate and intentionally harm the victim.

Gillian Flynn manages this on a grand scale in Gone Girl. Her protagonist creates a diary with the intent of gaslighting not just her husband but the world at large.  She leverages her celebrity and her gender to do it. She isolates him by getting her version of events out to the world first, and she, like all other skilled abusers, is very, very good at storytelling.

Which leaves the question in the title of Bancroft’s book. Why? Why does he do that? Why does anybody?

In fiction, the reason might get dressed up, but in reality, it’s always the same.

The abuser wants control over their victim.  In many (even most) cases, they want that control coupled with unquestioned sexual access.  To get and keep control and access, he must control the victim, and the perception of the victim.  He needs accomplices, and he needs to gaslight them as well.

The most infamous and arguably best executed example of gaslighting in literature remains Vladimir Nabokov’s Lolita. The narrator doesn’t just gaslight the victim, or the other characters in the novel.  The author deceives the entire audience.

That’s why the most infamous and arguably best executed example of gaslighting in literature remains Vladimir Nabokov’s Lolita. The narrator doesn’t just gaslight the victim, or the other characters in the novel.  The author deceives the entire audience.

Readers and critics have been convinced for decades that poor Humbert Humbert—who can’t even keep his own name straight in the text—loves Dolores (“Lolita” is the name Humbert assigns her.  Nobody else uses it).  But here’s some of what Humbert does:  He lies about his relationship to a fourteen-year-old girl (he gets the neighbors to believe she’s his illegitimate daughter); he takes her away under false pretenses (enlisting the help of those same neighbors); isolates her; drugs her; rapes her repeatedly over a period of years; alternates his use of threats and bribery against her.

But readers remain convinced that despite his repulsive and violent actions, Humbert really loves Dolores.  Why is that?  It’s because he tells us so.  A lot.

We, as readers, are shown all of this. But in Lolita, we are shown everything from Humbert’s point of view.  As he speaks, the story he weaves is of uncontrollable and forbidden passion for a girl who is different from all others.  The object of his obsession is uniquely alluring.  He is helpless in the face of the storm of emotions she raises by her very existence.

Humbert tells us the story before Dolores can, and he’s very, very good at telling that story.  He’s a skilled abuser.  He knows from experience what will work and he uses it.

So, we are roped in.

We, the readers, are gaslighted.

Sarah Zettel is an award-winning author. She has written eighteen novels and multiple short stories over the past seventeen years in addition to practicing tai chi, learning to fiddle, marrying a rocket scientist and raising a rapidly growing son. Her new novel is The Other Sister, now out from Grand Central Publishing. 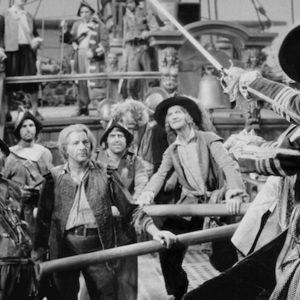