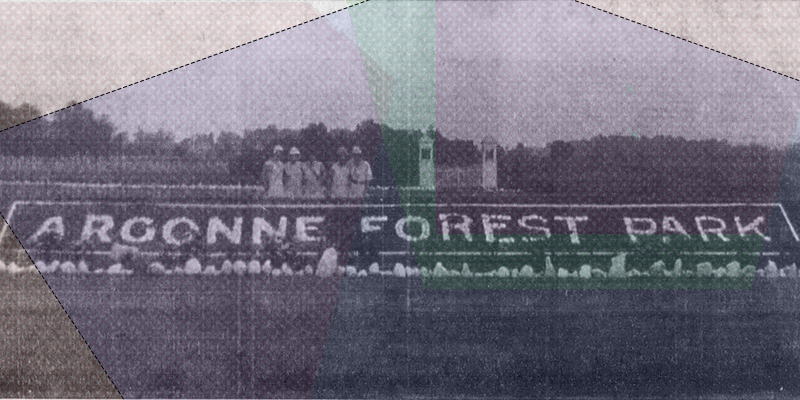 How Argonne Forest Park became a succor for veterans and the inspiration for a novel.

Back in 1998, when our children were still quite little, we took them on brief hikes in the lovely Dayton MetroParks.

In addition to making sure they got fresh air and exercise, we wanted them to appreciate nature beyond our tiny suburban backyard. One of our favorite parks was Possum Creek MetroPark.

On one hike, we discovered more than nature. We came upon remnants of a pool, a dance floor, a streetcar. A small sign indicated that we were in an area that had once been Argonne Forest Park. Metaphorically, we were traipsing through the echoes of a park within a park, nearly forgotten as nature took it back over.

I read everything I could find in the archives of the Dayton Daily News about the Argonne Forest Park. From articles and grainy photos, I learned that September 6, 1917 was declared a holiday in Dayton in honor of the sixty-six men initially sent from the area to serve with the American Expeditionary Forces on the Western Front in the Great War. They were honored with a banquet, then marched in a parade down Main Street to the train station. Thousands cheered them on.

One of those soldiers was 22-year-old Null Hodapp. He fought in the Meuse-Argonne Offensive, a major part of the final Allied offensive. The battle was fought September 26, 1918 through November 11, 1918.

Null built the park in the 1920s south of Dayton, partly in memory of Ralph but mostly for Great War veterans and their families. The park was a popular amusement park between the two world wars. “Amusement park” in the 1920s and 1930s meant swimming, dancing, canoeing, baseball and other such activities. But the onset of the Second World War and gas rationing put an end to leisure driving, and as a consequence, to the Argonne Forest Park.

I tracked down Ruey Hodapp Jr., Null’s nephew. He was 70 in 1998. I interviewed him about his uncle, the park, and what it was like to visit the park as a child.

As a result, I wrote a long feature article which was published in the Dayton Daily News in late November 1998.

Though I was quite proud of the article, and our family hiked in Possum Creek numerous times after that, eventually the experience of coming upon the remnants of Argonne Forest Park and writing the article faded deep into my well of memories.

Except… not entirely. It quietly echoed in my subconscious for more than twenty years, until I began brainstorming ideas for the fourth of my Kinship Historical mysteries, which feature Sheriff Lily Ross, inspired by Ohio’s true first female sheriff, Maude Collins, in 1925.

My previous novel, THE STILLS, was set in winter 1927, so I wanted to set my newest Kinship novel in the summer of 1928. Lily’s mother, Beulah, had been in the background of the previous novels; her brother, Roger, was a significant part of her formative years. I’d referenced this and Roger’s death in the Great War, but I had not yet explored this part of Lily’s family history in depth. Instinctively, I knew it was time to do so.

Argonne Forest Park and the article I’d written so many years before scurried to the front of my mind. I dug out my now browned and tattered copy of the article and began reading…

“Both forests stand mostly quiet now. More than a half a century has passed since the woods resounded. One forest… crackled with artillery fire and the strangled cries of men wounded and dying. The other forest…crackled with the burst and boom of midway-style shooting ranges and fireworks… Both forests are called Argonne. One is in France, the other in Dayton, yet both were forever linked more than 70 years ago by the experiences and efforts of one Daytonian…”

Ah—there it is. The echoes of one forest to another. Echoes of sounds, similar yet so different. Elsewhere in the article I referenced the send-off parade of thousands, and then a different kind of parade: straggling war-wounded after war’s end walking past four weary women looking on from a roadside in France.

Other echoes came to mind from my own life.

My father fought on the front lines in World War II in France. He was a BAR (Browning Automatic Rifle) man; his assistant gunner, Wesley, was shot dead right beside him by a sniper. I was born late in my parents’ lives, so thirty years had passed by the time I was a little girl and heard my father crying out in darkness from nightmares. Another twenty years would pass, and I would be in my early thirties before my father would tell me those nightmares were of him reliving the war.

He never said he had PTSD (Post Traumatic Stress Disorder), but he did.

A chaotic childhood would trigger in me a different sort of PTSD that still, occasionally, echoes in my own life, and most likely always will.

PTSD and how experiences and decisions from our pasts—or even from loved one’s pasts—can echo on and on in our lives became the thematic backbone of THE ECHOES.

As Lily describes in THE ECHOES, “She thinks how quickly life can turn from light to dark, thinks how hurt need only find us once to then echo through the rest of our lives.”

THE ECHOES is the first novel I wrote entirely during the COVID pandemic, and I thought often about how pandemic-induced hurt, in one form or another, will continue to echo through all of our lives.

Now, as THE ECHOES is coming out, I think similarly of the tragic war of Russian invasion into Ukraine. The atrocities we see in the news now seem an all too familiar echo of past wartime scenes. They will also echo into the future.

And yet, and yet…

The Argonne Forest Park we discovered on our family walk years ago captivated me because it’s really the riveting story of a soldier surviving one of the most brutal battles in history, losing his friend in the last hour, then coming back home to create a recreational park in a similar forest and giving it the same name. Not as a memorial to the horrors of war. But as a way of helping individuals find healing and joy in a community.

That’s the overarching theme I’ve explored in the Kinship Mystery Series. Yes, life can turn in an instant from light to dark, and that darkness can echo on and on throughout life.

Hope is one of the most courageous acts. In community, in kinship, sometimes we can find hope. Maybe just pockets or slivers or moments of hope. Hope, nonetheless.

Hope is how life can turn from dark back to light.

And light, too, can echo forward. 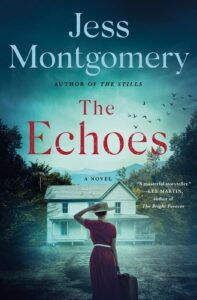 JESS MONTGOMERY is the Literary Life columnist for the Dayton Daily News and former Executive Director of the renowned Antioch Writers’ Workshop in Yellow Springs, Ohio. Based on early chapters of The Hollows, Jess was awarded an Ohio Arts Council individual artist’s grant for literary arts and the John E. Nance Writer-in-Residence at Thurber House in Columbus. She lives in her native state of Ohio. Her latest novel, The Hollows, is now available from Minotaur Books. 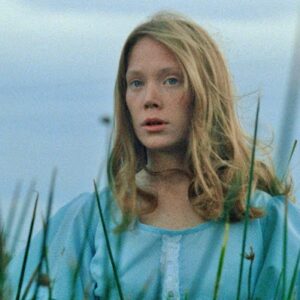 Crime thrillers in the big city can work well because the reader feels the anonymity of being one of millions; danger can come...
© LitHub
Back to top