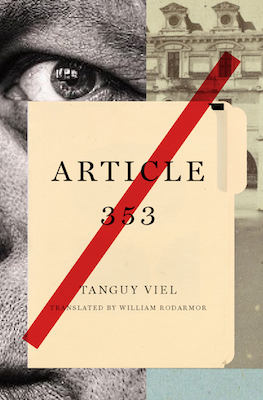 The following is an exclusive excerpt from Article 353, a lyrical tale of revenge and injustice on France’s northern shores, and Tanguy Viel's newest addition to the growing subgenre of “gentrification noir." A down-and-out father explains his motivations for killing a real estate developer who swindled him into investing all his money in a seaside residential building.

So you came back alone, said the judge.

Yes. There were two of us, and yeah, I came back alone.

So you know why you’re here.

The body was found this morning.

The best thing to do would be to go back and start from the beginning, said the judge—without revealing if this was sort of a threat or if he was giving me a last chance. I was sitting on a wooden chair opposite the oak or cherry desk that seemed to elevate him a little, there in the one hundred and fifty square feet allocated to the two of us in the shabby courthouse office at the end of a dark hallway.

The sea breeze was still scattering my thoughts, the feeling that the windows were wide open, and that my thoughts—no, they weren’t thoughts, images maybe—were still whirling around more than the wind over a sail. It was as if I were a cormorant aloft on a shifting breeze, scanning the sea for a tiny shadow or glint that would justify my diving to catch something, anything, so long as it was a place to begin, something sparkling under the water like the scales of a fish.

It would be nice to have these handcuffs off, I said. Me, I can’t talk unless my hands are free.

The judge heaved a heavy sigh, a sigh that said, “I shouldn’t, but I’m going to do it anyway,” and he gestured to the policeman behind me that it was okay to take the cuffs off. For a juge d’instruction—examining magistrate—he wasn’t condescending or harsh, and he didn’t have the traits I’d expected, like a gray beard or a forty-year-old’s paunch. This judge was thirty at the most and seemed like he wanted to hear me out. He could be my son, I told myself, and in a way, it would have been better if he actually were my son, given Erwan’s situation right now—Erwan, that’s my son’s name, see—given the ten-by-ten-foot cell from which he was probably looking out at the town, since Erwan’s screw-ups are part of this story too.

I rubbed my wrists a little to ease their soreness, and avoided looking at the gendarme because I didn’t want him to think I was insolent or proud, since I wasn’t proud of anything, no sir. And as the door quietly clicked shut, the judge gestured for me to start talking, his hands spread like a preacher’s. The room smelled of fresh paint, that neutral gray that’s often used on offices to hide their age, and it made for a strange kind of mixture, as if all the town’s injustices had lingered there for centuries and were now trapped under the fresh paint, imprisoned for a long time. I won’t say I was relaxed just then, but for the first time in months I felt like I was where I belonged. In fact, from the steadiness of my voice or my seeming to be at ease in his office, I could see the judge sit back in his leather chair and breathe more easily, as if to say that from then on he would be counting on me the same way he counted on the penal code.

The room smelled of fresh paint, that neutral gray that’s often used on offices to hide their age, and it made for a strange kind of mixture, as if all the town’s injustices had lingered there for centuries and were now trapped under the fresh paint, imprisoned for a long time.

He looked as if he had all the time he needed. If it took two weeks, he would take them, if only to detect some hidden twist or turn in the story. So I said: It’s about a run-of-the-mill swindle, Your Honor, that’s all.

When I said that, I suddenly grasped the whole business for the first time, like I was taking a picture of it from the moon and seeing a planet wrapped in its big sheets of blue.

Just a run-of-the-mill swindle, I repeated, lowering my gaze to the wood of the desk with his hand resting on it, half hidden by dozens of files piled on the leather desk pad, many of them already labeled “Lazenec Case.”

If we lived in a village up in the mountains or in some Wild West town a hundred years ago, I’m sure we would have seen him coming, I told the judge, maybe when he walked into town or rode down Main Street, spotted him from the stagecoach stop or the saloon, and it wouldn’t have taken us long to size him up. And a hundred years ago, you would probably be a sheriff, with a revolver or something in your pocket instead of a law book you knew by heart, at a time when right and might weren’t completely separate, if you can say that they’ve been completely separated since then, and if that’s such a good thing, considering that power and violence have learned how to disguise themselves.

Anyway, the fact is we didn’t see him coming. It was more as if he popped up like a mushroom under a tree and had grown pretty tall before we noticed anything. I’m not saying things were all that quiet around here before him, but in a region that probably hadn’t appeared on TV in twenty years, most of the time life just goes on without any hiccups, with the usual daily stuff chewed over in the newspapers and bars, of course, but nothing likely to become the talk of the town. And then you felt like a rumor grabbed hold of everyone, and the rumor grew, and it had some basis, and worse, it spread and got into people, to the point where no one had more of a right to repeat it than anyone else. Like a kind of background noise that started gently rising, full of molecules that eventually rained down on each of us, without any one person feeling more guilty or involved or better placed to talk about it, but also without anyone keeping from adding their two cents or their anecdote and eventually their judgment, provided each sentence spoken could seal the guy’s tomb, which we all would have liked to have closed over him a long time since.

No, not all of us. Otherwise, he would have never prospered the way he did, I told the judge, without our ever knowing who was really supporting him. And I’m in no better position to tell the whole story than anyone else, except that maybe more of the debris landed on my doorstep than at other houses, like shards of broken glass that some local wind picked up and blew to my place, the way newborns are left on certain people’s stoops.

Seeing how long ago the courts should have gotten interested in his case, though, I’m only a new bud on branches that have been growing for a long time, I told the judge, a bud just opening on a November dawn as foggy as the streets of London, considering that when it comes to fog, England doesn’t have anything on us. Maybe that’s also why when a guy like him shows up with his straight talk and his straightforward looks, standing so straight on the damp ground, there was something about him that was like a hand reaching out to pull us from the waves by dint of energy and ideas about change, by big plans.

Because when it came to plans, he had them. That’s the kind of guy he was, I told the judge, a guy with plans. 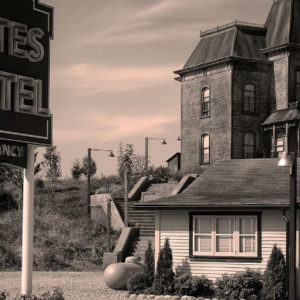 Abandoned Estates, Empty Hotels, and Isolated Schools Think of Gothic and what comes to mind? Ruined towers, brooding castles, women in crinolines fleeing from an unknown horror?...
© LitHub
Back to top