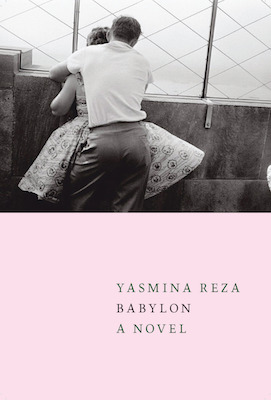 The following is an exclusive excerpt from Babylon, by Yasmina Reza, a wicked French noir about how far you’d go to help out your friends. In the following passage, a woman gets an unusual request for help from her upstairs neighbor.

I was nearly asleep when I heard a noise that sounded like a doorbell. Pierre had put on his miner’s headlamp to read an old SAS spy novel (since Gérard de Villiers died, it hurts him not to have new ones to read). I felt him stiffen, but then there was silence. A few minutes later we heard the same sound again. Pierre sat up to listen more closely, he tapped me and whispered, “Somebody’s at the door.” It was five after two. We both waited, leaning slightly forward, he with his reading lamp still on. Someone was ringing. Pierre got out of bed, he pulled on a T-shirt and undershorts and went to see. Through the peephole he recognized Jean-Lino. He right away imagined a water-pipe break or that sort of thing. He opened the door. Jean-Lino stared at Pierre, he made a strange move with his mouth and then, keeping his lower lip scooped like a bucket, he said, “I killed Lydie.” Pierre didn’t immediately take in the sentence. He stepped aside to let Jean-Lino in. Jean-Lino entered and stopped still by the door, his arms hanging loose. Pierre too. They both stood waiting in the vestibule. I came in wearing paja- mas—a Hello Kitty nightshirt and bottoms in checkered flannel. I said, “What’s up, Jean-Lino?” He said nothing, he stared at Pierre. “What’s going on, Pierre?” “I don’t know. Let’s go in the living room.” Pierre turned on a lamp and said, “Sit down, Jean-Lino.” He offered him the couch where he’d already spent a large part of the evening, but Jean-Lino chose the uncomfortable Moroccan chair. Pierre sat down on the couch and motioned me to come beside him. I was ashamed of the room. We’d been too lazy to clean up. We’d said we’d do it all in the morning. We’d emptied the ashtrays but the place still smelled of cigarettes. There were rumpled napkins, scat- tered plates, bowls of chips . . . On the chest there was still a row of untouched glasses. I wanted to straighten up a little but I sensed that I ought to sit down. Jean-Lino was higher than us on the Moroccan chair. His comb- over hair hung halfway down on the right side, the other part flapped to the back, it was the first time I’d seen his scalp naked. There was a kind of silence and then I said gently, “What’s going on, Jean-Lino?” We watched his mouth. A mouth trying out different shapes. “Bring us a little cognac, Elisabeth,” Pierre said.

Jean-Lino stared at Pierre, he made a strange move with his mouth and then, keeping his lower lip scooped like a bucket, he said, “I killed Lydie.”

I got three vodka glasses and filled them with cognac. Jean-Lino drank his down in one gulp. Something else was strange about his face. Pierre poured him another and we sipped too. I did not understand what the three of us were doing in the middle of the night drinking again in the messy dim living room. After a moment Pierre said, in an ordinary voice as if he were asking a friendly question, “You killed Lydie?” I looked at him, I looked at Jean-Lino, and with a laugh I said, “You killed Lydie!” Jean-Lino set his forearms on the chair frame, but that chair is not made for that, and for a second he looked strapped into an electric chair. I realized he wasn’t wearing glasses. I’d never seen him without glasses. “Where is Lydie?” I said.

“You strangled Lydie?” He nodded.

“I don’t know what that means.”

“What don’t you understand? He strangled Lydie,” said Pierre. “Where is she?”

Jean-Lino waved a hand toward the upstairs. “Is she dead?” Pierre asked.

He nodded and closed his eyes.

Pierre and I stood. I ran into the bedroom to get a sweater and put on slippers. When I got back to the living room Jean-Lino hadn’t moved an inch. “Let’s go see, Jean-Lino,” Pierre encouraged him, “in case she’s alive. You know, it’s not that easy to strangle someone.”

“Not sure, not sure, let’s go up!” Pierre was starting to get annoyed. He signaled me to step in. I took Jean-Li- no’s arm. It was unbelievably stiff and stayed clamped to the Moroccan chair. I tried to reassure him, murmuring kind words. I said, “Jean-Lino, you can’t stay in that chair all night.”

“Especially since you’re the only one who’d ever even want to,” Pierre said, trying to tone down the drama.

“Get hold of yourself, Jean-Lino!”

Pierre collapsed back onto the couch, his foot caught in the cord of the table lamp, which fell to the floor and plunged us into near darkness. “Shit, I really need all this!”

“Let’s go see, Jean-Lino,” Pierre encouraged him, “in case she’s alive. You know, it’s not that easy to strangle someone.”

I turned on the ceiling light, which we never use. “Not the ceiling light, not the ceiling light, for god’s sake!” Pierre moaned. I lit a floor lamp. Jean-Lino faced these successive lighting arrangements without changing his marmoreal posture. I no longer knew what to do, between a husband slumped in the position of a fellow determined to let everything go to hell and a Jean-Lino fossilized and unrecognizable. We’d all had too much to drink. I started tidying the room. I took away the glasses, the bottles, whatever was lying around. I shook out the cloth from the buffet over the balcony edge. I stacked the chairs Lydie had lent us by the door. I brought in the hand vacuum, my beloved Rowenta, to pick up the crumbs. I started to vacuum the coffee table, the carpet beneath  it, Pierre  emerged  from  his  slack  state  and snatched it from my hands. “Perfect moment for that! You find this the right time for housekeeping?” He stood up, holding the Rowenta like a machine gun, and said to Jean-Lino, “OK my friend, now we’re going upstairs, come on, up we go!” Jean-Lino shifted a little but he seemed nailed to his Moroccan seat, incapable of pulling himself out of it. Pierre set the vacuum going again and aimed it at Jean-Lino’s chest, sucking up a patch of shirt with a startling noise. I cried, “What are you doing?” Jean-Lino was terrified by the suction and leapt up into a defense stance. At that moment I knew we were actually going to go upstairs. Jean-Lino set his hair back in place and smoothed it compulsively several times, I gently led him toward the door. Pierre put on street shoes and we left the apartment. We went up on foot, by the yellowish light of the stairwell, Pierre ahead in pale pink flared undershorts, naked legs and loafers, then Jean-Lino in his rumpled party clothes, and me at the rear in pajamas and fake-fur slippers. At their door, Jean-Lino fumbled in his pockets before pulling out the right key, we could hear Eduardo meowing and scratching behind the door, Jean-Lino murmured little words to him, sono io gioia mia, sta’ tranquillo cucciolino. I took Pierre’s hand, I felt a little anxiety and at the same time a terrific desire to move forward into the thickness of the night. 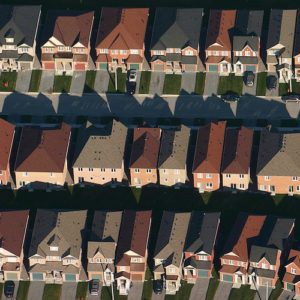 12 Crime Books Set In Suburbia I have lived most of my life in suburban Connecticut—as a child, as a young adult, as a wife and mother, and now as an author...
© LitHub
Back to top