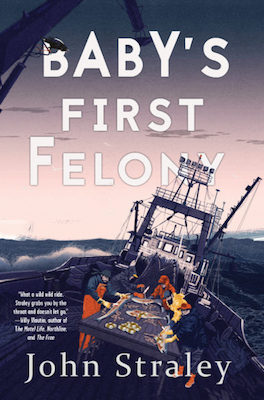 The following is an excerpt from Baby’s First Felony, by John Straley, returning to his Cecil Younger series, set in Alaska, after a hiatus. In the following passage, the criminal defense attorney and his friend take a walk through town, and make a few off-color jokes.

If it please the Court: Your Honors, I stand before you today to tell the story of what happened. My words are not to be offered as any form of excuse, not even as an explanation, but I want to tell you the entire experience as it happened to me. Then, of course, you will be free to decide what you will.

It was the year of a hundred and six consecutive days of rain, and I had lost my daughter to her cell phone. The rain began at the end of summer, but the days were indistinguishable from late fall, each blending one to another in a slurry of rainfall, brightened only by a sunbreak a few minutes each day. The first completely dry day did not occur until December, when we had a cold high-pressure system move in that brought freezing temperatures that turned Swan Lake into a mirror of ice.

People’s moods in Sitka, Alaska, were irritable both during and after the rain. This story starts in September before the darkest of the dark days had hit. This was still during the period of the jokes and well before the deaths and mayhem.

Todd had been asking me about the meaning of the Buddhist concept of “right relationship.” Now, Your Honors, I know you might think I’m already beginning to drift, but bear with me, for this turns out to be one of the more slippery of the foundational stones of the eight-fold path—not that there are any real bodhisattvas in this cast of characters. But there are, as they say, many ways to get lost in this world, and “wrong relationship” is one of the most common.

Article continues after advertisement
But there are, as they say, many ways to get lost in this world, and “wrong relationship” is one of the most common.

As you may remember from the previous briefing, Todd lives in my house and has for many years. He was involved in the circumstances of this crime, a fact that I still regret. He and I are both now in our late fifties, and we relate to each other as brothers, even though there was a time when he was my ward, and I essentially had legal custody of him after his parents passed away. Todd rests comfortably on the solidly affected end of the Asperger’s scale. Recently he has been learning to tell jokes as part of his occupational therapy. Joke telling, it turns out, helps create a kind of ready-made emotional relationship for people with autism. They say funny things, people laugh, display emotion and the autistic person laughs in response to the other person’s laughter and presto: without having a clue of what an inner emotional world is like, they have entered into an emotional relationship.

Todd has lived his life with a series of obsessions. He has been fascinated with the patterns on manhole covers and the mechanics of how whales swim across the ocean. He has memorized the populations of all the major cities in the world and knows the make and model of almost every audio recording device ever manufactured. He loves animals and children, and his current interests include Buddhism and telling jokes.

Todd and I were walking back from work. I had walked from the Public Defender Agency, where I worked as a criminal defense investigator. I had stopped off at the jail to see one of our clients who had been locked up, and then I went over to the senior center to pick up Todd from his job in the kitchen. The rain was easing up to a light pebbling on the lake, and a few ducks were waddling in the middle of the street where someone had dumped a full bag of chips out of their car. This was irritating to the drivers along Lake Street but not enough for anyone to blow their horn, because it appeared that most everyone still enjoyed watching the ducks.

Todd and I were walking back from work. I had walked from the Public Defender Agency, where I worked as a criminal defense investigator.

“Tell me your joke today,” I said.

Jane Marie, my wife, had been keeping on me to vet the jokes Todd was learning, for since it was known that Todd was telling jokes, people all over town were happy to tell him new ones, and Jane Marie worried some were not appropriate for all audiences and Todd would get himself in trouble. There had been an incident a few years ago when a little girl was crying outside the swimming pool, and she asked Todd if he could take her in to help her change into her suit, and he said he couldn’t and that he was sorry, and when the little girl asked why, Todd explained that the locker room was for women only because, “Vaginas were generally considered private and were only really comfortable being exposed to other females in situations such as locker rooms or some public restrooms.” Well, the lifeguard on duty heard the last of this, and there was a small-town kerfuffle about his choice of language, and Todd couldn’t go to the swimming pool without me for a while, and it caused Jane Marie some heartburn in the joke department.

Todd took a deep breath and straightened his glasses. “A little boy was sitting on the curb in town eating a big handful of chocolate bars, one after another, and an old man comes up to him and says, ‘You know, young man, you really shouldn’t eat so much chocolate. It’s not good for you,’ and the little boy says, ‘I don’t know, my grandpa lived to be one hundred and three.’ The old man said, ‘Oh, I’m sorry, did your grandpa eat a lot of chocolate?’ and the little boy said, ‘No but he learned to mind his own fucking business.’”

By this time, we were through the roundabout and to the only stoplight downtown, and the wind was hitting us straight on without obstruction from the east. Todd’s glasses were now a haze of mist, dotted with raindrops. Though we could have crossed without danger to get undercover on the opposite corner, we waited in the soaking wind because Todd honors all laws.

“It’s a good joke,” I said. “If you tell it with anyone under twelve years old around, just change the ‘fuck’ to ‘damn.’ You’ll be fine.”

Todd nodded. He had taken many similar notes and understood the F-word problem.

“Why was the little boy eating chocolate bars sitting on the curb of the street?”

The light changed but just before we stepped down off the curb I considered his question. I never like to brush him off or give him the impression I’m not giving his inquiries full consideration.

“It’s just funnier. I guess.” We hurried across the street.

Excerpted from Baby’s First Felony by John Straley. Copyright © 2018 by John Straley. All rights reserved. No part of this excerpt may be reproduced or reprinted without permission in writing from the publisher. 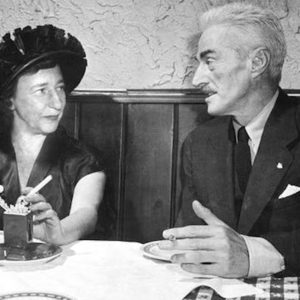