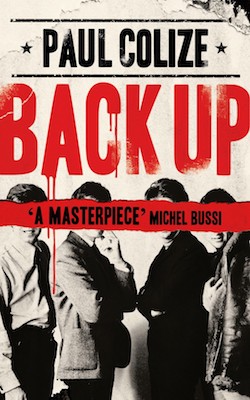 Paul Colize’s Back Up recounts the mysterious and semi-comical dissolution of a band called Pearl Harbor, vaguely modeled on the giants of British Invasion pop, and the strange deaths of all of its members. In the following exclusive excerpt, the band’s most self-destructive member goes on a bender, with disastrous consequences.

No one imagined Steve Parker would ever do the deed, though his suicidal threats were well known to his entourage, and to the members of Pearl Harbor, who spent every day in his company. They reflected the darker side of his nature, the side that had earned him a reputation as a troubled, nervy character.

The slightest disagreement—a difference of opinion on a choice of chord was all it took—and he would fly into a rage, cursing the whole world and threatening to bust his amp if his demands weren’t met.

Excessive behaviour like this was just the way Steve functioned. People around him were used to his eccentricities and treated his threats like the tantrums of a spoiled child. With time, no one paid them much attention or took him even half-seriously.

More shocking even than his death was the fact that nothing suggested he knew about the death of his friend Larry, just the day before.

Larry Finch was the founder and uncontested leader of Pearl Harbor, but Steve Parker was its éminence grise. It was he who took the decisions affecting the future of the group. After mulling them over, he would inform Larry, taking him to one side, after which Larry would relay them to all concerned, with strict orders to comply with the directives, the first of which was the band’s insidious choice of name, imposed by Steve on the other members.

Steve was viscerally anti-American, blaming the Marshall Plan for making Germany the economic winner of the war. He also blamed eight long years of post-war rationing in Britain for creating a generation of small, thin, spotty, violent teenagers, fodder for the gangs of Teddy Boys that wreaked havoc in the Fifties. Throughout the same period, the German people had prospered thanks to an economic shot in the arm, from America.

Steve maintained that the wave of British rock’n’roll groups crashing onto the US market and filling the top spots in the Billboard chart constituted a second assault on Uncle Sam after that fatal Sunday in December 1941.

Oblivious to the irony at their expense, the American G.I.s who formed the backbone of Pearl Harbor’s devoted Berlin following saw the name as a tribute to their strength in adversity.

Steve Parker had played guitar since he was eight years old. He had inherited a Fender Telecaster and a Stimer amp from a jazz-loving uncle.

He showed an aptitude for the instrument early on, and progressed quickly, though he took no lessons and couldn’t read a note of music.

At age thirteen he began writing lyrics, which he set to music and sang, accompanying himself on his guitar. Acerbic, angry stuff, lashing out at the British Crown, the school system, Harold Macmillan’s Conservative government and what he called the British people’s ‘blind submissiveness’.

His response to criticism generally included foul language and declarations to the effect that he refused to communicate with ‘ordinary people’.

At fifteen, he was prone to a variety of tics—nervous spasms that tightened his features. He would scratch himself, pull at his hair and wring his hands convulsively. Pupils at the school he attended began to avoid him. They said he was a nervous wreck, and called him a poof.

His parents worried about his aggressive, anti-social nature and mood swings. They took him to see the family doctor.

The GP referred him to a psychiatrist who diagnosed manic depression and prescribed antidepressants. In addition to his manic-depressive symptoms, Steve suffered acute pain from a curvature of the spine.

At seventeen, he was addicted to a cocktail of antipsychotic drugs and painkillers, and regularly took more than his prescribed dose.

Steve Parker and Larry Finch got together in the spring of 1963.

Steve lived about five miles from Battersea at the time, near the Hammersmith Odeon, the famous concert hall that had hosted Ella Fitzgerald and Louis Armstrong. He had quit studying and was working nights in a bakery.

One morning, he spotted a small ad placed by Larry in Jazz News, calling for anyone interested in forming a rock group. Steve had sent off a few demos, without much hope.

To his surprise, Larry asked him to come over the following week. They hit it off, and recruited a third guitarist to form The Weapons, their first band. The trio had no drummer because, as Larry had predicted, none replied to the ad. Kits were expensive, and there was a shortage of amateur players.

After a few weeks, the third member was fired due to temperamental differences, and The Weapons disbanded.

Rather than hunt for a new rhythm guitar, Steve decided on a different line-up: drums, bass and two lead guitars instead of the usual back-up rhythm and solo lead combo. The two leads would answer each other’s solos in a kind of dialogue. Two years later, listening to Keith Richards’ and Brian Jones’ intertwining guitar work on ‘The Last Time’, he reckoned the Rolling Stones had stolen his idea. He even considered suing them, briefly.

It took three months to find a guitarist up to the task, and four more to find a drummer. Pearl Harbor’s definitive line-up was finalised in May 1964: Larry on bass, Steve as lead singer and guitar, Jim on second guitar and Paul on drums.

Steve was eighteen now, and smoking his first joints.

His back was giving him more and more pain. An X-ray revealed a slipped disc. The doctor said his long periods standing, and the weight of the guitar, were aggravating the condition. He was told to stop playing, or to play sitting down.

At twenty, just before Pearl Harbor secured their Berlin contract, he swallowed twenty Benzedrine tablets in a failed suicide attempt.

It took the police several days to establish Steve Parker’s movements between leaving Berlin on Friday the seventeenth of March, and his death in Hamburg on the night of the nineteenth to the twentieth of March, 1967.

Steve had left Berlin late in the morning after securing a couple of bootleg tickets for Jimi Hendrix’s show at the Star Club on Sunday the nineteenth of March.

He had taken the train, reached Hamburg by early evening, and checked into the Kastanien Hotel in the heart of Sankt Pauli, on a street parallel to the Reeperbahn, the notorious artery that was home to the city’s frenetic round-the-clock club and music scene.

On the night of Friday to Saturday, numerous bar owners reported seeing him enter their establishments and leave after a glass or two. One said Steve seemed to be looking for something. Another assumed he was out to visit as many places as possible.

Article continues after advertisement
Steve Parker’s mysterious farewell message stated that it was better to explode in mid-flight than to crash into the crowd.

He had concluded his tour with a visit to the Hotel Luxor, well known for the services of its exotic hostesses. Parker had a particular fondness for Thai girls, and his companion remembered him thanks to the generous tip he had left her.

He had spent Saturday in his room, and left the hotel around 3:00p.m.

Towards the end of the afternoon, he had a brief altercation with a drunk who jostled him in a bar. Words were exchanged, and then insults, and following the insults, blows. The fist-fight was settled after a few punches, leaving Steve with a black eye.

He had sought treatment in a pharmacy, then went to an Italian restaurant. After that, he had drunk several beers at the Top Ten Club and ended the evening in a strip joint.

The hotel porter saw him return at around 5:00a.m.

On Sunday, he left his room only to go to the Hendrix concert. After the show, he had visited another well-known Sankt Pauli establishment, where his companion confirmed that he seemed drugged, and had been unable to see their evening through to its natural conclusion.

One of the hotel residents had come down to reception at around 10:00a.m., claiming to have heard a shot fired at about seven, but with no clear idea as to where the sound had come from.

The maids had knocked at Steve’s door around midday, despite being told to clear off on the other mornings of his stay. They had expected the usual volley of insults, and were surprised by his silence.

Faced with a locked door and no response to their calls, they had contacted the hotel manager, who used his pass key.

Steve Parker was sitting on the floor, leaning against his bed with his head thrown back. The bedroom ceiling was splattered with blood.

The police investigation concluded a verdict of suicide.

Steve Parker had shot himself in the mouth using a large-calibre hunting rifle. The police suggested that the gun had been bought on the black market, and that it was easy enough to find a weapon like that in a city like Hamburg.

Toxicology tests established 1.52 milligrams of heroin per litre of blood.

Two months later, overcome with grief at his death, Steve Parker’s parents hired a private detective. They told him of the events surrounding their son’s death, and their doubts about the conclusions of the German police enquiry.

The detective travelled to Hamburg and conducted his own investigation, which unearthed a handful of elements to discredit the suicide theory.

The first was the quantity of heroin found in Parker’s blood. According to the detective, the dose would have rendered him incapable of firing the gun.

Second, the shotgun’s barrel was so long that Steve would have had to pull the trigger with his toe. Even then, he was found wearing shoes. The source of the weapon was another mystery. It was claimed that Steve had not brought it with him from Berlin. The detective could see buying a gun in Hamburg was easy, but a person still had to know where to look. And this was Steve’s first time in the city.

Third, the detective felt that the relative lack of fingerprints found in the room, and especially on the gun, compounded the suspicious circumstances surrounding Steve’s death.

Last of all, the few words the singer had scrawled on a scrap of paper on the bedside table were ambiguous and seemed to have been dictated.

Steve’s parents referred the detective’s observations to the police. Despite this, the report and its conclusions were unchanged. The police closed the case, recording a verdict of death from a self-administered shot to the head.

Steve Parker’s mysterious farewell message stated that it was better to explode in mid-flight than to crash into the crowd. 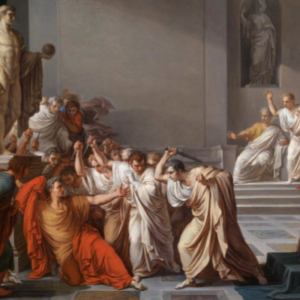 CrimeReads Brief: Week of March 15, 2018 “What does it mean for a romance to take the shape of a murder investigation?” The dark arts of In a Lonely...
© LitHub
Back to top