Bellini and the Sphinx 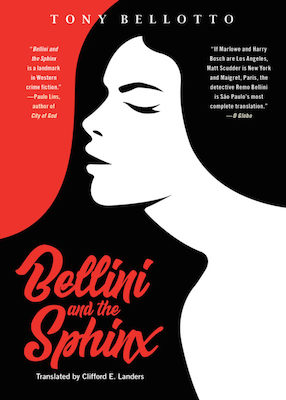 The following is an exclusive excerpt from Bellini and the Sphinx, the American debut of the celebrated crime series by Brazilian musician and writer, Tony Bellotto, which stars Remo Bellini, a private eye in the tradition of Philip Marlowe, who takes on the mean streets of Sao Paulo to solve a case of missing dancer.

Yes, I have problems with being mistaken for a cop. The provocation of calling her a whore hadn’t worked, so I resumed the conversation on a softer note.

“And what’s the difference between a private detective and a police detective?”

“The same as between the bathroom in my house and a public urinal.”

“But I’ve never seen the bathroom in your house,” she said.

“Okay, Fatima, I get the feeling you don’t want to help me.”

“No, I’m just kidding . . . I understood what you meant. You feel you’re morally better than a cop, is that it?”

“Then tell me what this Ana Cíntia is like.”

I took some time to formulate the reply: “I don’t know.”

“That makes it hard.”

A momentary silence fell between us.

It was true: I didn’t know who I was looking for or even why.

I stared at Fatima and sensed an attraction beginning to manifest itself in my pants. Despite the erotic nature of the situation, I also felt the need to urinate, so I excused myself to the bathroom. I waited for my hard-on to subside, and as I pissed I noted that the urinal reminded me of a baptismal font. The vision of that baptismal font defiled by urine brought back memories hidden in corners of my mind. For example, the murmurs of my mother at Sunday Mass, repeating to the point of exhaustion a monotonous phrase that to me was extremely disturbing and enigmatic: “Lamb of God, who takes away the sins of the world, have mercy on us.”

And the voice of my father when I told him of my decision to leave his law practice: “You’re going to abandon a noble and promising profession as a lawyer to get involved with people of questionable character in places where not even minimum morality is respected? That’s absurd.”

Or the words of my ex-wife in the note announcing her departure, left among the rumpled sheets on our bed: I married a man of ideals and principles, not a boy who refuses to grow up and insists on believing in fantasies and detective stories.

“You’re going to abandon a noble and promising profession as a lawyer to get involved with people of questionable character in places where not even minimum morality is respected? That’s absurd.”

The cold water from the faucet drove away the ghosts and brought me back to the bathroom at the Dervish. I returned to the table expecting to find Fatima gone, but she was still there, with her large breasts and her ophidian eyes. I sat down, pulled my chair over to hers, and decided to be more objective: “If you help me solve this case, Fatima, I’ll owe you one.”

I knew that in the night world, a word of honor is worth more than a signed and sealed contract. And I wasn’t mistaken.

Fatima assured me that she had frequented the circuit of nightclubs on Rua Augusta for over three years. Despite having met numerous Ana Marias, Ana Lúcias, Ana Teresas, and various other Anas, she swore she had never heard of any Ana Cíntia. I asked her to recall all the dancers who had left the circuit in recent months. Another flurry of women’s names swarmed around me. Even a few transvestites were mentioned, and I didn’t rule out the possibility of Ana Cíntia being a man, because as Khalid would say, women are an illusion. At the end of the conversation, however, only two names jibed with “brown shoulder-length hair, dark eyes and thick eyebrows, a squarish face, and a slim body with muscular legs,” as the mysterious Rafidjian would describe her. Those were the dancers Camila and Dinéia.

Dinéia had gotten pregnant and, as she didn’t want an abortion, had gone to her mother’s in the interior of the country.

“Where in the interior?” I asked.

“I don’t know, some interior in this Brazil of ours.”

Great, I thought, only a few million square kilometers to search.

Camila had also disappeared, but Fatima didn’t know why.

“Camila is real crazy, always disappearing and coming back more unhinged than ever.”

“Crazy from coke, weed, pills, needles, crack. Whatever there is.”

“And where’d she disappear to?”

“She was in rehab somewhere or other . . . in a hospital or an asylum, beats me.”

I remembered that earlier in the afternoon, I had wasted some time trying to reach that Iório guy, the cop from the Fourth Precinct, by phone. I located him at home, where he was still sleeping at five p.m. His wife told me: “Iório traded night for day a long time ago.”

“But who wants to talk to him?” she asked with a slight Italian accent.

After some minutes Iório greeted me in a hoarse and ill-humored voice. I quickly explained the situation and we agreed to meet at three in the morning at the Bisteca d’Ouro, a bar on Rua da Consolação.

I hurriedly left the Dervish with Fatima in tow, taking her by the Hotel Memphis on Rua Frei Caneca. I gave her some money to make up for the hours of work she had missed.

“Call me if you remember anything.”

“Give me your number.”

I wrote my home and office numbers on her palm, as they were no blank pages left in my notepad. Before she got out of the cab—I don’t know who initiated it—we kissed. An intense kiss, wet, nervous, inevitable. Her large breasts had bothered me all night. I fondled them over her blouse. They seemed hard to the eye, but when I touched them I found they were soft. The nipples hardened like stone and stuck out in high relief under the smooth dark fabric of her blouse.

Fatima disentangled herself and got out of the car, laughing. “You’re going to be late for your appointment,” she said, closing the taxi door.

As she entered the hotel, I called out: “Do you know a weird doctor who hangs out in his car, observing everything in front of the Dervish?”

“A doctor? No, the only people watching that place are the police, from time to time.”

I arrived at the Bisteca d’Ouro just before three o’clock. Some parked police vehicles broadcasted metallic voices interspersed with static out onto the sidewalk.

In the year I worked as an assistant lawyer to my father, I was treated more like an intern than a full-fledged attorney. That meant endless hours sitting idly at his desk. I had the illusion that I would become a great criminal lawyer just by being there, sitting where Tulio Bellini was accustomed to sitting. That gave me the feeling that things were under control. I would phone my wife every half hour to say, “I love you,” and I thought our marriage would last forever. Sometimes I would ask the secretary, Dona Helga, for coffee, light up one of the Havanas (Montecristo Number 2) that rested in a light-colored box on the desk, and examine the books on the shelves. Generally, titles on criminal justice didn’t strike me as particularly interesting, but there were other volumes that attracted me. Pierre Grimal’s Dictionary of Classical Mythology was one. One day I pulled it from the bookcase and flipped the pages at random, not focusing on anything until I got to the letter R. Instinctively, I looked for the entry Remo.

remo (Remus). In the legend of the founding of Rome, Remo is the twin brother of Romulo. According to one explanation, obviously of late origin, he had been given the name of Remo because he was “slow” in everything. Which would explain why he was supplanted by Romulo. Remo, in the legend, is depicted as the unfortunate “double” of his brother.

It’s true that the name Remo was never totally suppressed from my life, but with one or two exceptions I succeeded in being called Bellini throughout kindergarten, elementary, middle, and high school. And I continued as Bellini in law school.

Article continues after advertisement
I had the illusion that I would become a great criminal lawyer just by being there, sitting where Tulio Bellini was accustomed to sitting.

This gave me a feeling of fulfillment, almost like an anesthetic, and kept those two strange and menacing twins suckled by a she-wolf away from my day-to-day endeavors.

After graduation I became Dr. Bellini, which was short-lived because I never got used to being called doctor.

I survived as Bellini (and I am in fact a survivor), but I never freed myself from Romulo’s threatening ghost hovering over my head, reminding me of what I should have been but never was.

The Bisteca d’Ouro was a police hangout, and one of the few good things I inherited from Tulio Bellini was a total aversion to cops.

I didn’t know Iório but imagined him to be a typical policeman and therefore hard to spot among the cops infesting the Bisteca at that hour of the night, since in general they’re all very similar. But something set him apart. Maybe the white stubble, maybe the look of someone who enjoyed taking care of small birds.

As soon as I entered, he welcomed me with open arms, a gesture that I must admit was unusually warm for a policeman. I was a bit suspicious. With cops, as Dora said, It’s best to be on your guard.

And there were guffaws, including from other cops, all of them old, almost decrepit, as if they were there for some event in a police retirement home.

“This here is the old guard of the São Paulo police.”

He introduced me to some of his colleagues, after leading me to a table in the left corner of the room. He asked the waiter for cold beer and a small fillet “to get started.” He asked me: “How do you feel about a few slices of French bread to dip in the meat sauce?”

We drank beer and ate slices of bread with fillet garnished with chopped onion, while I related the story and all its details.

After listening to my narrative, Iório didn’t say anything. He merely extended his left arm and opened his hand in my direction. With his right hand he summoned a guy who was sitting next to the counter, a skinny kid with a silver ring hanging from his left ear. He wore his hair long despite a devastating receding hairline that gave him a very high forehead. His name was Stone.

Stone couldn’t be older then twenty-two and had an arrogant bearing that attempted to disguise his insecurity and fragility. At first I thought he was a young policeman, an investigator or something like that. But Iório’s aggressive and ill-humored attitude toward him proved I was wrong. He was an informer.

Iório suddenly changed from a friendly old man into an implacable torturer.

“Stone, you shitty two-bit trafficker. If you don’t want to spend some time in the Graybar Hotel, you better do what my friend here wants, understand?”

Stone, surely schooled in police decorum, acquiesced humbly. Iório stood up, kissed my cheek, and left without another word.

Stone and I sat there.

From BELLINI AND THE SPHINX. Used with the permission of the publisher, Akashic Books. Copyright © 2019 by Tony Bellotto. Translation copyright © 2019 Clifford E. Landers

Writers with a Badge 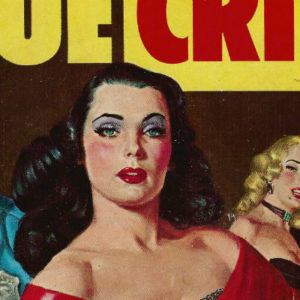 True Crime Advice: Is the "True Crime Boom" a Real Thing? Now that true crime obsession has gone mainstream, a whole host of dilemmas and debates have wormed their way into everyday...
© LitHub
Back to top