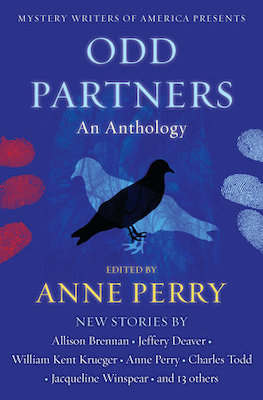 The following is an exclusive excerpt from “Bite Out of Crime,” a story by Allison Brennan in a new anthology called Odd Partners, edited by Anne Perry and the Mystery Writers of America, featuring stories in which unlikely duos (Sherlock Holmes and John Watson, Thomas and Charlotte Pitt, etc) take on enthralling crimes.

Jamie Blair first saw the mutt eating out of a Dumpster behind the barbecue restaurant on Folsom Boulevard near the freeway.

It was after eleven that night, when Jamie was on her way home after robbing a couple of houses on 49th Street. Rich neighborhood with lots of targets, but she was good at her trade: She’d never been caught. After all, someone had to take care of her deadbeat parents. Pay the rent, buy food, put gas in her mom’s beat-up car that Jamie still wasn’t old enough to drive.

“Ignore him,” she mumbled to herself. Problem was, she liked dogs—primarily because they weren’t people. That the poor dog was digging through garbage for a meal made her angry. Well, a lot of things made her angry these days.

She slowly approached. He appeared mostly German shepherd, but a mutt because he was too small for the breed. And he didn’t look like he’d been on the streets long—a little dirty, but not too skinny.

He looked at her and there was something in his sad eyes. Fear. Apprehension.

She pulled a half-empty bottle of water from her backpack, then squatted down as the dog came over. She poured the water out slowly, and he lapped it up. Poor thing—it had been a hot day, though when the sun went down so did the temperatures. Such was autumn in Sacramento.

When the water was gone, she tossed the bottle into the Dumpster and started to walk away.

“You can’t come home with me,” she said.

Her mother would have a shit fit if she brought a dog home. But she couldn’t just leave him here. If animal control got him, they’d kill him if they couldn’t find his owner. And what if he’d been abandoned? He didn’t look like he’d been on the streets for long, but she’d never forget when her neighbors across the street moved and left their cat behind. That poor animal waited for them to come home, losing weight every week. Jamie had fed it until her mother whacked her upside the head for giving their food to “a filthy feline.” A month later Jamie found the cat dead in the gutter, victim of a hit and run.

She couldn’t let that happen to this mutt. It just wasn’t fair.

Jamie squatted again, and the dog came right up to her and licked her hand. He wore a collar and she looked at the tag.

His name was Duke. There was a phone number.

She almost didn’t expect him to follow. She resumed walking through the parking lot to the hole in the fence that cut off a good quarter-mile of her trek home.

Twenty minutes later she was at her house, the small side of a corner duplex surrounded by duplexes up and down the street. Her mother was passed out on the couch; the huge flat-screen television played some sitcom with a fake laugh track.

“Quiet,” she told him, not knowing if he could understand her.

It was after eleven that night, when Jamie was on her way home after robbing a couple of houses on 49th Street. Rich neighborhood with lots of targets, but she was good at her trade: She’d never been caught.

He still growled. Great. Duke didn’t like her house. Her mom did nothing all day—she watched soap operas, drank beer, and smoked pot. Maybe that was the problem. He didn’t like the smell. She wrinkled her nose. She didn’t like it much either.

“Stay,” she ordered. He sat like a sentry at the front door.

Jamie didn’t dare turn off the television—that was the fastest way to wake up her mom. She went to the kitchen, since she’d just gone to the store the other day and there was fresh food. Cooked two hamburgers on the stove as quietly as possible. She put American cheese on both, then mustard and ketchup and pickles on hers, and left Duke’s plain. She figured dogs didn’t much care for the extras.

She cut Duke’s hamburger into quarters, and hers in half, then took them to her bedroom along with another liter of water and a plastic bowl.

Duke was still sitting by the door, right where she told him.

She motioned for him to follow, and he did. She unlocked her door—if she didn’t lock it, her mom would toss her room until she found all her cash and then buy hard drugs. Pot didn’t make her mother mean, but if she started using the serious shit again, she’d become unpredictable.

Jamie turned on her fan and opened her window. She put water in a bowl for Duke, then gave him the plate of hamburger. She ate hers slower than the dog, watching him. In the light, he actually looked pretty clean and healthy, though his paws were dirty and two of his claws were torn off. Maybe he’d gotten lost. Jumped his fence or something. Could have walked a long way, that’s how he hurt his feet.

She ate half her burger, gave Duke the other half, guzzled some of the water, then emptied her backpack.

Tonight had been a good score.

She’d hit three houses—three was her lucky number, so she always robbed three houses a month, usually on the same night. She staked out her territory for weeks—sometimes months—before she picked the marks. She had to make sure they didn’t have security systems, no dogs, no nosy neighbors, and confirm that they’d be out for the evening.

She scratched Duke behind the ears, and he put his head on her lap.

Jamie never took anything that couldn’t fit in her backpack, which made it even better because most of the time, the people didn’t even know they’d been robbed, and if they figured it out, they really couldn’t remember when. Five credit cards—those would go to a fence she worked with for a hundred dollars a pop. Some jewelry—those would go to another guy she knew. He always shortchanged her, but she could usually get a few hundred from him for anything she brought. He’d taught her the difference between real and fake. Diamonds and gold moved well. And, of course, cash. People left cash all over the place, and she knew the best hiding places, but rich people didn’t hide their money. If they didn’t have a safe, they put cash in jewelry boxes, desk drawers, and with their underwear. Weird. She taped her stash to the bottom of her bed or in the vent behind her desk. Sometimes rolled up in her old Converse if she knew her mother was snooping around.

Tonight she’d walked away with over a thousand bucks, most of it from the Tudor house three down from the corner whose owners were at the Community Center Theater.

She didn’t particularly like stealing from people, but it was better than living on the street, and she only targeted people she figured could afford to lose a few bucks. She couldn’t wait until she graduated high school and could leave. Maybe go to college. Not a big college, but a community college. She could probably go for free because her parents were deadbeats. She didn’t know what would happen to her mom in three years when she walked away—the woman couldn’t take care of herself, and her dad was in and out so much he might as well be gone for good. But she didn’t feel guilty at the thought that she would someday leave and never look back. Maybe she’d get a dog. Like Duke. Someone to keep her company. Because dogs didn’t lie to you, they didn’t steal your shit, and they didn’t smoke so much dope they couldn’t hold down a job.

The State of the Mystery: Part 1 of a Roundtable Discussion 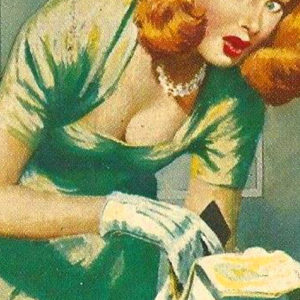 The State of the Mystery: Part 1 of a Roundtable Discussion Once again, the Edgar Awards are upon us—that august night of crime and mystery when honors are bestowed, traditions celebrated,...
© LitHub
Back to top