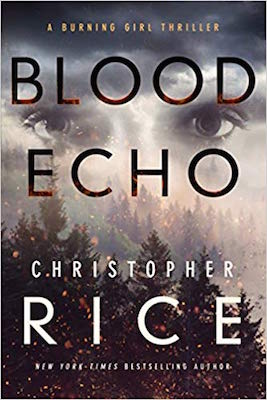 The following is an exclusive excerpt from Blood Echo, the second installment in The Burning Girl series, featuring Charlotte Rowe, raised by serial killers, fueled by a super-drug, and resolute in her mission to track down humanity's worst actors. When a corporate consipracy jeopardizes her hometown, she is forced to wield her violent powers.

Charlotte Rowe’s even tone sends a ripple of new energy through the room, something between wonder and nervousness. The techs all look up from their computer screens at the same time—this must be the first time they’ve heard the voice of the woman they’ve been told to call Bluebird.

“How are you feeling?” Cole asks.

“OK. Is your ground team with you?”

“We are.” The woman who speaks next sounds as though she’s standing just an inch or two away from Charlotte inside their transport truck. “With respect, we think she’s being too cautious here.”

Cole notes that Ed didn’t warn him his voice was being broadcast to Charlotte’s entire ground crew. There have been so very many things he’s had to note about Ed lately, so many of them sour.

“It’s in keeping with the specs I approved?” Cole asks.

“Well, I can’t see it and I’m looking in her ear right now,” the ground tech says.

“We still think he skins his victims, right?” Charlotte asks.

There’s a new tension in her voice. But it’s her words that shock everyone in the room.

The female tech who spoke up earlier drops her hands to her lap.

Even Cole feels his breath catch.

“Is that a yes or a no?” Charlotte asks.

“OK,” Charlotte continues, as if she’s indulging all of them, “then it’s reasonable to assume that at some point, either before or after he takes me, he’s going to examine my flesh. Or some part of it, at least. Does that sound right?”

“OK. Then what do you think he’s going to do if he suddenly comes across several hundred thousand dollars’ worth of technology sitting inside my right ear?”

But Charlotte Rowe is alluding to another possibility without saying so explicitly.

Tonight, she will be posing as the same type of sex worker they believe Davies has abducted and murdered five times over the past three years. Which means that to make his introduction, Davies will first pay for access to her body. What she allows Davies to do and for how long will be entirely up to her. Which means, in order to accomplish tonight’s mission, she’s being forced to think of herself as a piece of meat. Literally.

Tonight, she will be posing as the same type of sex worker they believe Davies has abducted and murdered five times over the past three years. Which means that to make his introduction, Davies will first pay for access to her body.

“If you don’t wear the earpiece,” Ed says, “then we have no audio connection to you.”

“It means we can’t warn you if we see something you don’t.”

“You weren’t in my ear last time and things went OK.”

“And you’re a free bird, thanks to the cleanup job we did,” Ed says.

Ed just stares at him, then his eyes widen, and he sits forward with his elbows on his knees, frowning at Cole as if he’s a cat who just dragged a dead animal inside the house. “Excuse me?” he whispers.

The emotion drains from Ed’s face, then he gets to his feet and leaves. If it were possible to slam the bank vault–style door behind him, he might have, but it’s far too heavy. Once Ed’s gone, Cole feels a pang of regret. But just a pang.

Ed just drove them dangerously close to an uncomfortable truth at the very moment Cole needs peak focus from everyone.

For Cole’s security director to express any opinions on Charlotte’s past performance was colossally stupid. For starters, five months ago they’d been monitoring her without her consent. Worse, she’d been deceived into taking Zypraxon by Bluebird 1.0’s lead scientist, who decided to start posing as Charlotte’s therapist after Cole shuttered the original project and denied him access to his labs.

When the dust finally settled and the full consequences of Dylan Cody a.k.a. Noah Turlington’s betrayals became clear to everyone involved, Cole gave Charlotte what he considered a reasonable deal, with a pretty good exit plan, if she chose that option.

But he’d hardly call it fair. Reasonable, but not fair.

Fair is for kindergarten.

In the end, she’d agreed to keep working with them. So he wasn’t about to let Ed’s former-cop ego and loose lips screw up the fragile peace he’d established with the woman the world once knew as Burning Girl. The same woman who now happened to be the only human on the planet in whom Zypraxon actually worked.

“Ed’s going to sit this one out, Charley. I apologize for his … insensitivity.”

“And the earpiece is your call.”

Cole pulls his iPad from his satchel and opens the PDF of Richard Davies’s case file.

“How about we do a little quiz to get you ready? I assume you’ve read Davies’s file.”

“OK. Then spell his last name for me.”

“Just a little verification that you’re doing what I asked. That’s all.”

“Excellent. And where was his father’s farm located?”

“Correct. And what happened to Richard’s family when he was nine years old?”

“His father shot his mother three times in front of him and then turned the gun on himself. Richard was doing his homework on the other side of the motel room they were living out of. Police believe that after they lost the family farm his mother’s meth addiction became worse and his father forced her to start prostituting herself on Aurora Avenue North. The night of the murder-suicide, Richard told police his father was angry because his mother came home with less than her usual take.”

He listens carefully for any sounds of sympathy in Charlotte’s voice, but she sounds like she’s reciting sports statistics. And when her voice does waver, it seems due to distraction, like she’s studying her reflection to see how convincing her costume is.

“A lot of us have sad stories. We don’t have to turn them into horror shows.”

Charlotte clears her throat, then starts speaking again. At first, Cole’s got no idea what she’s saying—until she gets to the third name. “Shayla Brown. Deborah Clover. Maryanne Breck. Patrice LaVon. Janelle Cropper. Shouldn’t you be asking me about them? Given that, you know, I’m about to become one of them?”

“You’re not going to end up like they did.”

“Still, it might be a good idea to quiz me about the victims instead of trying to figure out if I’ve developed some sort of identification with a psychotic killer just because we both had shitty childhoods.”

He considers arguing with her but decides against it for two reasons. One, he’d then be guilty of the same thing he just gave Ed the boot for doing. Two, she’s right.

“A suggestion from your lead scientist perhaps?”

Cole feels his chest tighten and the pit of his stomach go cold. “We will never solicit suggestions, tips, or advice of any kind from Noah Turlington when it comes to you and your psychological well-being. And I can assure you, he’s not present in this room right now, nor will he ever be.”

“A condition of his reemployment is that he’s to use his birth name at all times.”

“You call me by the name I picked.”

“You’ve earned the right,” Cole says. “He’s done quite the opposite.”

It never occurred to Cole that Charlotte might assume Noah would be present in the control room. Maybe that explains her quick temper with Ed. Or maybe it’s the fact she’s about to do something no human being should be able to do, and for the second time in five months.

A few seconds later, a previously dark screen lights up with a jerking point of view on the cargo bay of a container trunk that’s been soundproofed and carpeted. There are several flashes of darkness—blinks, Cole realizes—then a few glimpses of Charley’s ground team members scuttling to get out of her eye line. Costume racks flash across the screen, then a vanity and makeup table.

She takes a seat, and a second later, thanks to a prototype on loan to their operation from a family friend, Charlotte Rowe is staring into the mirror—and directly at everyone in the control center—by way of a pair of contact lenses that broadcast crystal clear images of everything their wearer sees via an encrypted satellite connection.

She takes a seat, and a second later, thanks to a prototype on loan to their operation from a family friend, Charlotte Rowe is staring into the mirror—and directly at everyone in the control center—by way of a pair of contact lenses that broadcast crystal clear images of everything their wearer sees via an encrypted satellite connection.

The costuming job is perfect.

It helps that Charlotte lost fifteen pounds for tonight’s performance, introducing sharp angles to her face that suggest the first stages of a serious drug habit. Her eye makeup’s so heavy a john will assume she’s trying to hide dark circles or a full-on black eye left by a vicious pimp. But it’s what they’ve done to her hair that Cole finds most striking. He figured they’d opt for some shiny costume wig. Instead, they’ve thinned out Charlotte’s actual hair unevenly and then sprayed it down so that it looks like she’s been clawing at her scalp for days and is just now trying to hide it with some cheap hairspray.

Cole’s only direction to the ground team was to costume her in keeping with the other missing women. And apparently that’s exactly what they’ve done. Charlotte Rowe, a healthy, fresh-faced twentysomething, has been turned into the kind of haunted, prematurely aging streetwalker you’d see in a grainy black-and-white photo shot by a photojournalist.

As soon as it’s out of his mouth, he expects her to make a biting remark about his inappropriate use of the word good. Instead, she gives him a thumbs-up, suggesting she considers the two of them teammates.

For now, at least.

“How’d you find this guy?” The same question that encouraged him to kick Ed out of the room.

With her, he doesn’t have the same luxury.

It takes her a second to grasp the significance of his last four words. They’re the same ones Charlotte said to Frederick Pemberton five months earlier, right before she squeezed his right hand hard enough to crush every bone in it.

The stern look she gives him doesn’t quite indicate trust.

But it doesn’t indicate a desire to quit, either.

From BLOOD ECHO. Used with the permission of the publisher, Thomas & Mercer. Copyright © 2019 by Christopher Rice. 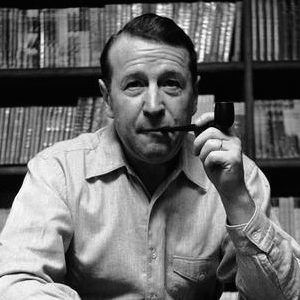 CrimeReads Brief: Week of February 16, 2019 Crime writer Michael Nava, author of the Henry Rios series, is taking his iconic gay detective to the podcast...
© LitHub
Back to top