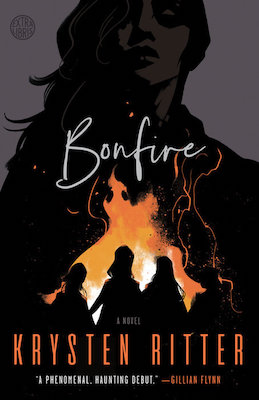 The following is an exclusive excerpt from the paperback release of Bonfire, by Krysten Ritter, a tale of mysterious illness and environmental degradation in a small town. In the following passage, an environmental lawyer returns to her hometown after a long hiatus to investigate what’s making teenage girls in town so sick.

Senior year, Misha and Kaycee started getting sick. Their hands shook—that was one of the first symptoms. Cora Allen and Annie Baum came next. They would lose their balance even when they were standing still. They forgot where their classrooms were, or how to get to the gym. And it was like the whole town got sick, too, like Barrens spiraled down into the darkness with them.

A joke. A prank. All just because they felt like it.

For a few months, they were famous, at least in Southern Indiana. Poor, neglected, small-town girls. Misha’s and Cora’s moms went on local TV and just before Kaycee ran away, there was even talk of interviews with big-time media. Someone from the Chicago Tribune was trying to link the sickness to other examples of corporate pollution. When the girls came out as liars, though, the story fizzled quickly, and no one seemed to blame them, at least not for long. They just wanted a little attention. That’s how the newspapers spun it.

But I believed them. And there’s a part of me that never stopped believing the sickness was real—that found myself again and again tugged to questions of environment and conservation, that brought the initial complaint to the agency’s attention, cleaving to it with the small but painful, nagging intensity of a hangnail.

When I moved to Chicago, I tossed all my old clothes as soon as I could afford to replace them. I traded in my style, such as it was, for whatever was draped on the mannequins on Magnificent Mile. I ran my accent over a blade, sharpening out the long Midwest vowels, and told people I came from a suburb of New York. I slept off my hangover on Sundays, and never prayed unless it was to clear the traffic. And I stopped calling home.

I did my best to shake Barrens off.

I felt the subtle tug of some half-dead memory, the insistence of something I’d failed to do or see.

Sometimes, coming home after one glass too many—or maybe too few—I’d return to old memories of Kaycee, back to afternoons spent target-shooting rocks at the huge mushrooms in the woods, back to my dog, Chestnut, and back to the convulsions of a town felled by sickness.

Maybe I wanted to believe there was some answer, some reason, for why she did what she did.

Maybe I just wanted to believe her, because after all this time I couldn’t understand how she had suckered me so badly.

No matter how many times I swore I would stop, I found myself coming back to the same questions. Why? I could shake free of almost everything, but I couldn’t shake free of that question. Why? Kaycee, Misha, the hoax. Why? Sometimes a month or two would go by. Other times, it was every few weeks. I’d lose hours searching Optimal, combing through the pitiful threads of what in Barrens counted for news. Mostly Optimal PR—new housing, a new community center, a new scholarship fund. All that searching over the years, and it never turned up anything of use.

Until, six months ago, it did.

Wyatt Gallagher’s three hundred acres are enclosed entirely by a sagging post-and-beam fence. The drought’s been bad here; the green has gone brown, and dust obscures my windshield. As I turn up the gravel drive, several chained‑up hound dogs bark in the distance. I knew the CEAW was renting out temporary space for the legal team, but I had no idea we’d be moving onto Gallagher’s farm—not that it’s surprising, given that Gallagher is the one who first complained about the reservoir.

Considering Gallagher doesn’t have a cell phone, not to mention spotty Wi‑Fi, it’s a miracle the complaint ever made it past town lines.

When I first saw the post, I immediately recalled the minutes from the most recent town hall meeting to read Gallagher’s complaint in detail. It wasn’t just Gallagher: a few other families stood up with him and expressed concern about the water. Pouring over the minutes, I felt like Alice down her rabbit hole: I tumbled suddenly into old complaints, buried reports from dozens of Barrens residents, all these old issues and complaints neatly spiraled up and bound to Gallagher’s rage. I made four pages of handwritten notes just by reviewing the minutes.

I put Gallagher in contact with the Indiana chapter of CEAW. There are procedures, protocol, paths meant to take us out of the entanglement of our fears and suspicions. But the Indiana team, still dealing with a tie‑up in state legislation about a clean energy bill that should have been passed two years ago, leaned on us for support.

From Bonfire. Used with the permission of the publisher, Crown Archetype. Copyright © 2017 by Krysten Ritter.

Mystery in the Age of Empire 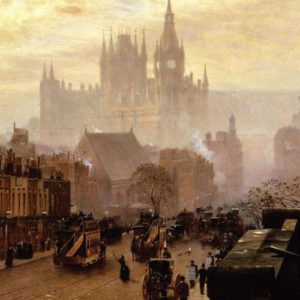 Mystery in the Age of Empire History is a collection of stories. Unfortunately, when I was a child, I found those stories were pretty poorly written....
© LitHub
Back to top