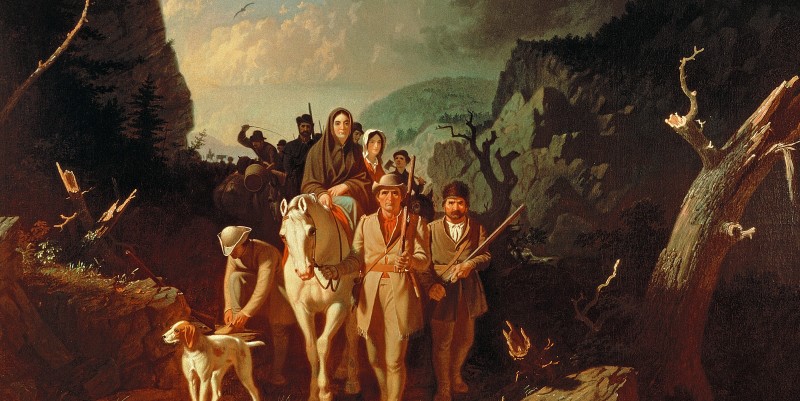 In 1776, thirteen year-old Jemima Boone wandered away from her family's settlement and into one of the era's fiercest land disputes.

On the day her life would be transformed, Jemima Boone was occupied like many girls her age—escaping chores and testing parental boundaries. This was July 14, 1776, ten days after the completion of the Declaration of Independence, but news of that turning point in the year-old Revolutionary War had not reached Jemima and her fellow settlers beyond the borders of the former colonies. While the fledgling American government was still spreading the word of its determination to form a nation independent from England, the frontier remained in limbo, caught in a struggle among Indians, settlers, the British, and nature itself. 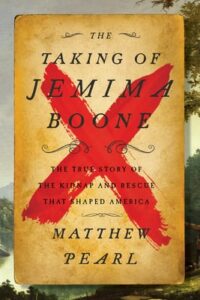 Jemima strolled the banks of the Kentucky River with two friends downhill from the hardscrabble settlement where they had moved with their families. That year-old settlement was Fort Boone—or Boonesboro, as it was increasingly called—named for Jemima’s father, Daniel, but gesturing at her whole family’s contributions. Alongside Jemima walked Betsy and Fanny Callaway. Betsy, sixteen, had dark hair and complexion, and Fanny, fourteen, would be described as a “fairy blonde.” At thirteen, Jemima was the youngest of the trio and, having arrived before Betsy and Fanny, had eagerly welcomed companions near her own age.

They constituted a significant portion of the girls at the settlement, the total population of which was fluid but not more than a hundred. Childhood came with considerable autonomy on this frontier, but it also absorbed pressures and responsibilities. Considered an adult at sixteen, Betsy had recently gotten engaged, and the younger girls began to attract suitors. Now that they were in their teens, they were expected to contribute to one of the settlement’s scarcest resources: children.

Late the previous year, Dolly, an enslaved Black woman brought to Boonesboro by the Callaway family, had given birth to a son, the first non-Indian known to be born in Kentucky. Dolly’s motherhood is one of many early milestones achieved by members of the community who had no say in their arrival to this wilderness. Jemima’s older sister, Susannah, had by now given birth to a daughter, making Jemima more conspicuous in her status as next in line among Boones to start a family. In the short history of settlers pushing into Kentucky, there had yet to be a wedding. The teens and their families were still among the only non-Indians settled in Kentucky—the result of the controversial westward expansion that now faced obstacles at every level.

With summer blazing, the girls had felt confined at home, and this excursion broke up the monotony. It also held out the possibility of coming home with flowers, which could spruce up the spartan cabins in the settlement. The Callaway girls’ half sister, Kezia, who was seven and known as Cuzzy, and some of the other younger girls begged to go along, but the older ones sent them home disappointed. The trio kept walking until they reached the settlement’s lone canoe. One of the eligible young men at the fort, twenty-four-year-old Nathan Reid, had offered to row them out when he had heard about their plans earlier. But Reid never showed, and they may have already forgotten about his offer. The three friends didn’t need anybody’s help with the canoe or the river. Jemima had earned the childhood nickname Duck for taking to the water so naturally. Climbing into the unadorned vessel, the three girls floated along the dark water, vegetation stretching above magnificent cliffs into the sky. Jemima had recently hurt herself stepping on a sharp stalk, the same kind of cane stalks lining the river’s edges. Draping her leg over the side of the canoe into the water soothed her but left her guard down.

The Boones had led the way to Kentucky before the Revolutionary War as they balanced a desire to stake out a new phase of life against portents of violence, which were often ignored. On one of Daniel Boone’s early expeditions through the treacherous passages, including the Cumberland Gap, he had encountered members of the Shawnee tribe, for whom the vast natural resources of Kentucky had not only material but also spiritual importance. The Shawnee creation origin story stressed the value of isolation and independence, envisioning the tribe on an island as the only people in the world. Kentucky, at least up to this point, might as well have been that mythic island. On this occasion, an Indian known to the explorers as Captain Will—a Cherokee by heritage who had shifted tribal allegiance to the Shawnee—warned Boone and his companions against incursions into this untrammeled territory, which was separated from Virginia by mountain ranges and rivers and had only recently begun to be mapped.

“Now, brothers,” Captain Will said, “go home and stay there.

Don’t come here anymore, for this is the Indians’ hunting ground, and all the animals, skins and furs are ours; and if you are so foolish as to venture here again, you may be sure the wasps and yellow jackets will sting you severely.”

The American Indians who frequented Kentucky, including from the Shawnee and Cherokee tribes, faced the prospect of the first permanent incursion into an area they had inhabited for some ten thousand years. The eighteenth century had brought with it greater but still limited exposure to outsiders, through European trade and religious missions. Boone and his fellow explorers represented a sea change, an attempt to set a course toward seizing Kentucky. The exact meaning of the name Kentucky has been lost, but it’s believed to mean the “Land of Tomorrow” in one Iroquoian dialect, unintentionally matching these colonists’ objectives, a grave threat to the local tribes’ futures.

The solemn warning from Captain Will failed to dissuade the explorers, who continued to marshal resources for additional scouting trips into Kentucky. Daniel Boone occupied a role during this formative moment of American history harder to categorize than the politician or the military commander, though at times he served as both. Boone was a settler in the most literal sense of the word. That was his true vocation—to settle areas new to him and often to the colonists. Hunter, woodsman, explorer, surveyor: these skills all helped make him this consummate settler. Though Boone generally sought peaceful coexistence with Indians, he relentlessly pushed into other people’s territories, prompting conflict—thus his preoccupation with Kentucky.

Boone’s early, temporary excursions into the “Land of Tomorrow” gave him a sense of the beauty and unknown dangers he could expect. On one hunting jaunt, he and fellow woodsmen read from Jonathan Swift’s Gulliver’s Travels, a fantasy voyage into unknown lands. The edition they read from likely contained a map of Brobdingnag, land of giants, situated by Swift somewhere in North America. The trips also led to property claims on the land by the travelers, in turn prompting a demand for surveyors to record those claims. One such team of surveyors put their lives on the line to parcel off two thousand acres below the Elk River for George Washington, then a representative to the Virginia legislature, and in two other spots recorded seven thousand acres for another legislator, Patrick Henry, who was ready to carve out a large piece of property in a place unknown to him. Washington and Henry, like other influential politicos, believed they could get rich from pushing into the territory. Joining the rolls of early surveyors was Hancock Taylor, whose nephew Zachary later became president of the United States. As he traveled in 1774, Taylor stopped to christen a spring with his daughter’s nickname, Jessamine. While Taylor’s team floated down the Kentucky River, Indians riddled their canoe with bullets, killing one of Taylor’s men and shooting Taylor twice. As an indication of the vital importance ascribed to land claims by the settlers, Taylor was brought the survey book on his deathbed. Another surveyor “told him he ought to sign them,” according to a later deposition, “and he did” before he passed away. With lives risked and lost through these explorations, actually living in Kentucky seemed about as far-fetched as settling Brobdingnag.

Fanciful notions gave way to material plans as the settlers completed a series of treaties with tribes in the mid-1770s, sometimes forced onto the Indians by the military might of the settlers. For one of these negotiations, a group of land speculators had asked Boone to help draw up an agreement with the Cherokee over lands on the south side of the Kentucky River. “This I accepted,” Boone later re- membered, as related by his biographer. This brought Boone to an assembly of Cherokee and colonial representatives at the Watauga River, in present-day Tennessee, in the spring of 1775, shortly before the Revolutionary War began. Even when strife with Indians spread, Boone usually came off as fair-minded, poised, and hospitable, a natural ally to them. He advised another settler about how to comport himself. Approach Indians, Boone opined, “frankly and fearlessly, showing not the slightest sign of fear or trepidation. By kind acts and just treatment, keep on the friendly side of them.” For Boone, philosophy doubled as strategy. Among the like-minded leaders of the Cherokee was the aged Oconostota, who had been lobbying for peace with colonists for decades.

This crowd gathered at Sycamore Shoals, named for its giant trees, on the southern bank of the Watauga. Richard Henderson was among the colonists’ leaders in the venture. Henderson, thirty-nine, was an attorney and judge who had pushed back against restrictions on land expansion, especially into Kentucky, where by this point settlers had a track record of false starts and aborted explorations. Henderson saw a chance to make a fortune with a new colony. He spearheaded the weeks-long treaty negotiation. Along with the delegates, witnesses, and other attendees, the scenery filled out with wagons overflowing with goods and weapons, payment by the settlers for the Cherokee land. Covering twenty million acres in parts of what are now two states, the treaty was one of the largest land exchanges in American history. It paved the way for Boone and others to call for permanent settlement.

Excerpted from The Taking of Jemima Boone: The True Story of the Kidnap and Rescue That Shaped America, by Matthew Pearl. Published by Harper. Copyright, Matthew Pearl, 2021. Reprinted with permission of the publisher. 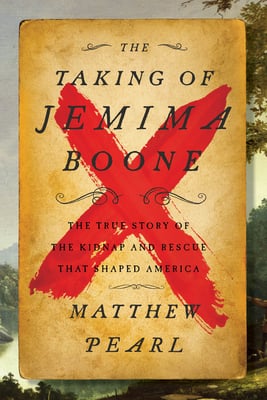 Matthew Pearl is the New York Times bestselling author of six novels, which have been translated into more than thirty languages. He is the co-founder of the digital magazine Truly*Adventurous and his nonfiction writing has appeared in the New York Times, the Boston Globe, The Atavist Magazine, and Slate. 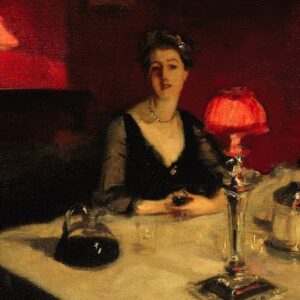 What is it about books that center on the incredibly wealthy—the glamour, the ritz, and complicated personalities that...
© LitHub
Back to top