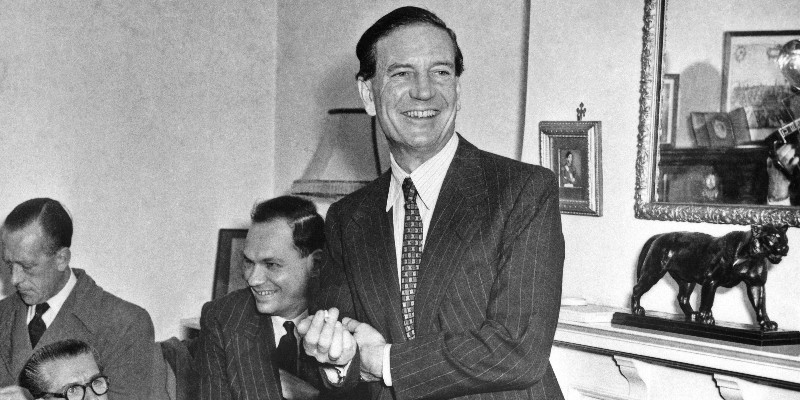 At a dinner in London, 1946, Kim Philby hinted at an intriguing proposition: the complete merger of American and British intelligence.

The war in Europe had been over for nearly a year. Churchill, the victor, had been thrown out of office by the votes of his own soldiers and sailors. England was exhausted, bankrupt, many of its factories and the centers of its cities destroyed, food rationed, hundreds of thousands of its men still overseas, the economy dependent on the labor of enemy prisoners of war. London, capital of the greatest empire the world had seen, was broken, pockmarked with wild-flower-strewn bomb sites. But the headquarters of the Secret Intelligence Service, MI-6, in Broadway Buildings and across St. James’s Park that of its counterintelligence division, Section V, had survived intact. As had the Café Royal in nearby Regent Street, London. 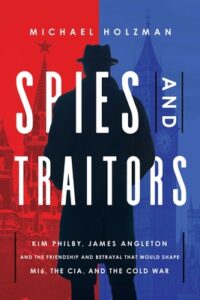 Captain James “Jim” Angleton, chief of counterintelligence for the Mediterranean Theater for the US Army’s Strategic Services Unit—the SSU, all that survived of the fabled OSS—had traveled up from Rome seeking advice from his mentor, H. A. R. “Kim” Philby, formerly of Section V, MI-6 counterintelligence. After meetings during office hours, they, and the head of Section V, Lt. Col. Timothy Milne, went to a nearby restaurant for a long dinner.

The Café Royal was a short twenty-minute walk across St. James’s Park from the Broadway Buildings, and less than half that distance from Ryder Street where MI-6 had sub-let accommodations to the American counterintelligence staff of OSS. It had been at Ryder Street that the future leaders of the CIA learned their trade. Malcolm Muggeridge described them in his condescending, oftquoted description: “Ah, those first OSS arrivals in London! How well I remember them, arriving like jeunes filles en fleur straight from a finishing school, all fresh and innocent, to start work in our frowsy old intelligence brothel; all too soon they were ravished and corrupted, becoming indistinguishable from seasoned pros who had been in the game for quarter of a century or more.” Among the most innocent had been young, passionate, Jim Angleton, rescued from a dismal term in the Harvard Law School by a friendly conspiracy between his father, already a major assigned to OSS, and his old Yale instructor, Norman Pearson, head of X-2. And in this case Muggeridge was right: by that postwar spring Angleton had become professionally indistinguishable from the seasoned pros in MI-6, such as Kim Philby.

After his 1944 induction into counterintelligence tradecraft by Philby in London, Angleton had been posted to Italy, beginning his work there with routine interrogations of people who had been captured trying to cross the lines between the Allied and Axis armies. He then established networks of agents and opened relations with the Italian naval and civilian intelligence organizations. Soon enough he was, in effect, running those organizations insofar as their activities interested him. He developed liaison relations with a dozen or more foreign intelligence organizations, securing access to, and copies of, their files (a collection later to become the foundation of CIA’s own “Registry.” Angleton would always stress the importance of files and liaisons.) He intervened in Italian politics at the highest levels, seized fascist collaborators at gunpoint from under the noses of partisans, ate well, and from time to time, with traces of remaining innocence, wrote poetry late into the night.

But during that April 1946 lengthy dinner in London he was once more the apprentice, literally outranked by Milne and effectively outranked by Philby, who was a civilian, but arguably the equivalent of a colonel in the British service (as he would later claim to be in the Soviet service as well). Angleton needed advice because President Truman had been cleaning house, abolishing the OSS among many other Roosevelt-era organizations, making it known that he disliked espionage, per se. As a consequence the British secret intelligence organizations did not know what to make of the rump of OSS that was the Strategic Services Unit. Or so they said, gaining a certain advantage in negotiations by emphasizing the question of the SSU’s possibly brief survival. The Brits weren’t the only ones who claimed to be doubtful of the need to share secrets with what perhaps was a dying organization. The London branches of the other American intelligence agencies, such as the army’s G-2, the navy’s ONI, the FBI, were also offering limited cooperation. What was to be done? Angleton turned to his old teacher: Kim Philby.

That dinner conversation no doubt included a tour of the counterintelligence horizon—Italian and Greek struggles between the British-backed monarchists and the communist partisans, the threat to northeastern Italy posed by a Yugoslavia still firmly aligned with the Soviet Union, the futures of Spain and France. There was so much to discuss, so many secrets to share, hint at, regretfully decline to fully reveal. Philby dangled the bait of “certain materials” that would become available to the SSU once it was clearly the American counterintelligence interlocutor with Section V. The purpose of the bait, as was made clear to Angleton’s superior officer, Colonel William Quinn, in an August 1946 meeting with Sir Stuart Menzies, Chief of MI-6 and, again, Kim Philby, was a merger of MI-6 and the SSU. The British wished to have their American colleagues share the cribs, as it were, in their “frowsy old intelligence brothel.” Quinn replied, as apparently Angleton had not, that he preferred to build his own house, while also enjoying access to the favors available in that of Menzies. It would take the full force of Director of Central Intelligence General Walter Bedell Smith to achieve that goal.

The lasting influence of a charismatic teacher is something of a cliché. In this case that influence came with both a positive and negative sign. During the immediate postwar years Angleton and Philby continued from their respective posting and travels that professional intimacy forged in Ryder Street during the war. By 1950 when both were in Washington, Philby, remaining the dominant partner, effectively forged that near-merger of the two services he had proposed in the summer of 1946. And then, in the 1950s and 1960s, one intelligence disaster following another, it became increasingly clear to Angleton that there had been a third partner to the merger, the KGB. He had more and more reasons to reflect on that formative relationship, to wonder to what extent those disasters were “Kim’s work.”

Michael Holzman was born in Brookings, South Dakota. He is the author of James Jesus Angleton, the CIA and the Craft of Intelligence, a biography of Guy Burgess, and one of Donald and Melinda Maclean, as well as the novel PAX 1934-41. He lives in Briarcliff Manor, New York.

Of Mice-Detectives and Men:
In Praise of
The Great Mouse Detective 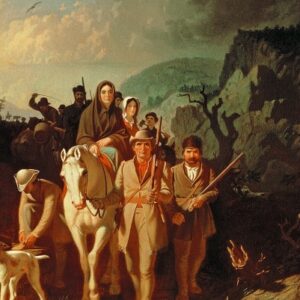 On the day her life would be transformed, Jemima Boone was occupied like many girls her age—escaping chores and testing...
© LitHub
Back to top