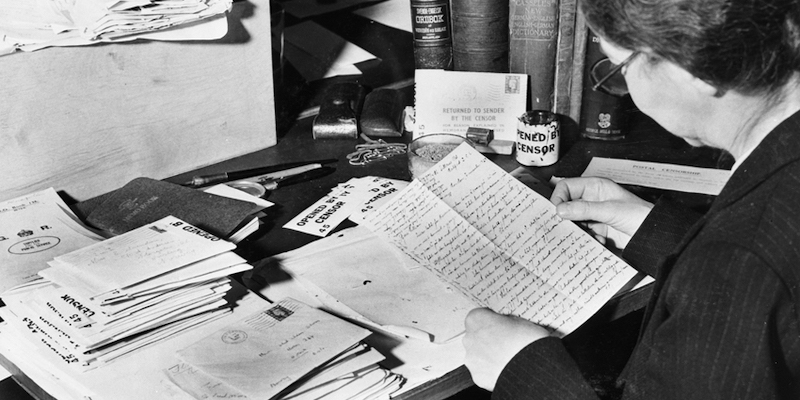 Markers in hand, these World War II volunteers used their language skills and expertise to hunt down German spies.

I’m just a girl at MI5
And heading for a virgin’s grave –
My legs it was wot got me in –
Still I wait for my bit of sin.

This verse is quoted by Sir William Stephenson, the chief officer for the British Security Coordination during World War II, perhaps a “real life inspiration” for James Bond, in his autobiography, A Man Called Intrepid, in a chapter devoted to the intelligence work conducted in Bermuda. Without naming the Censorettes, as the women employed by the British Imperial Censorship Detachment came to be known, he discloses that “the girls who shone in this work had well-turned ankles,” and that many had come to Bermuda because such postings “sounded romantic. They proved dull and demanding.”

Whether these girls were trying to find husbands, as Stephenson charges without proof, a few of them did manage to find, in their “dull and demanding” postings, a Nazi spy ring operating out of Brooklyn.

According to an article in World War II magazine, these women and men, numbering nearly a thousand, were chosen for service because of their knowledge of European languages. Languages were divided in to Common—English, most Romance languages, the North Germanic languages—and Uncommon—Greek, Latin, a huge swath of Slavic languages, and Japanese. Some of the Censorettes were trained in codes and chemistry. They were charged with intercepting the international mail between Europe and the United States, particularly those missives which would “in any way assist the enemy or injured the interests of the [British] Empire or its allies.” Some mail was hauled off of the American Export Line ships docked at Hamilton, Bermuda. Other mail was removed from the Pan Am Clipper, which landed at Darrell’s Island to refuel after flying in from the Azores. The Clipper was an inefficient but impossibly glamorous vessel, a flying boat which landed in and took off from water and made the trip from Lisbon to Bermuda and then on to New York, with a flying speed of just 188 miles per hour. When they were at full capacity, the Censorettes could examine 200,000 in a single day, with the ability to subject 15,000 to chemical testing.

“Much of the mail was very interesting for us,” wrote Gwendolyn Peck, a former Censorette who worked in Gibraltar and then Liverpool before volunteering for the post to Bermuda. “And also the American government were not unhappy to learn from us the details of Americans who were pro-German.”

Such a one was the man known as “Joe K.” Real name Kurt Frederick Ludwig, Joe K was born in Ohio, raised in Germany, and landed in Brooklyn to organize a spy ring. Censors in Bermuda began to flag his letters, which were “written in plain English, but in an awkward style, the language seemingly foreign to the author.”

Spymaster and MI-6 executive H. Montgomery Hyde, who had come to Bermuda to set up the Censorship Detachment (and whose wife, Dorothy, is the one credited with theorizing that “girls with neat ankles would prove the most suitable” for the role of Censorette) handed the Joe K. correspondence over to Censorette Nadya Gardner who possessed, in addition to her “great pair of legs,” a “slight knowledge of inorganic chemistry.”

Gardner suspected the letters might contain secret writing and sent them to the chemistry lab. When the results came back negative, she suggested that the lab try pyramidon, old-fashioned iodine reagent available in pharmacies to treat headaches, which was much used by the Germans during the First World War. The experts were skeptical but nevertheless, to coin a phrase, she persisted.

Upon the application of pyramidon, secret writing emerged from every Joe K letter tested, containing the latest information on aircraft production and shipping movements in and around New York City. According to his home town Ohio newspaper, “Ludwig was suspected of playing a part in the sinking of American ships, used invisible ink to send vital information on American war efforts to Germany, and catalogued information on airplane production, coastal defenses and troop movements.”

Ludwig and his six-man spy ring were captured, partly through the cooperation of Lucy Boehmler, Ludwig’s secretary, a Queens teenager whom the Brooklyn Daily Eagle dubbed the “Mata Hari of Maspeth.” Their Feb. 3, 1942, trial for espionage was the first held in the United States since the beginning of America’s entrance into the war. Because America had not been at war during the time of Ludwig’s spying, he escaped the death penalty and was sentenced to 20 years in Alcatraz. Upon his release, he was deported. Others in the ring received sentences of 12-15 years. The Mata Hari of Maspeth, who, according to The New York Times, testified in a “soft, girlish voice about trips to airports, Army and Navy installations and power facilities along the East Coast down to Key West,” received a sentence of five years in exchange for her cooperation.

As for Gardner, she used her “slight knowledge of chemistry” to secure a job at Estee Lauder, where she rose to the rank of managing director.

When I was writing my novel Censorettes, which includes an episode based on the Joe K case, I kept the pyramidon because my knowledge of chemistry is truly slight, and because I liked the idea of a young woman, after the FBI had performed all their most advanced tests, suggesting a mere headache powder solution—as Occam’s razor would have it, the simplest solution (literally, in this case) being the one more likely to be correct. Where I took a flight of fancy was in the “awkward style” of writing in English that alerted Nadya Gardner. In my novel, it is my heroine, Lucy, a great Shakespeare enthusiast, who notices that Joe (called Brooklyn Joe in the novel) shares her enthusiasm, but never quotes the Bard exactly correctly. There are hidden messages, she believes, in the letters that misquote Shakespeare, an instinct that proves correct when her chemist roommate, Lark, applies pyramidon solution to the suspicious letters.

And I did get in a bit of Censorette revenge: when Lucy meets her first American (stationed on Bermuda to build an airfield), he is wearing, what else, Bermuda shorts. Lucy cannot fail to note that he has “rather nice knees.” 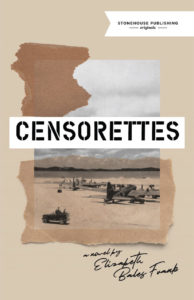 Elizabeth Bales Frank is the author of the historical novel Censorettes (Stonehouse Publishing, November 5, 2020). Her previous novel was Cooder Cutlas, published by Harper & Row. Her essays have appeared in Glamour, Cosmopolitan, The Sun, Barrelhouse, Post Road, Epiphany, The Writing Disorder and other literary publications. She was awarded a residency at Ragdale. Frank earned a BFA in film from New York University, and an MLIS from the Pratt Institute. She lives in New York City. Her website is https://elizafrank.com. 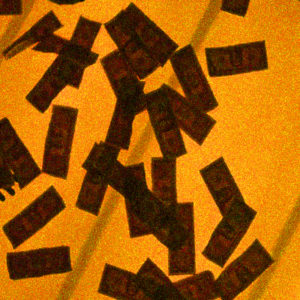 Global criminal activities generate trillions of dollars in profits. Estimates range from $2 trillion to $11 trillion (about...
© LitHub
Back to top