Celebrating the Crime Queens of the Golden Age

The Golden Age of British detective writing was dominated by four female authors who have predictably become known as the Queens of Crime: Agatha Christie, Dorothy L. Sayers, Margery Allingham, and Josephine Tey. There was actually a fifth as well, Ngiao Marsh, but she is usually discounted as she was a New Zealander, although her books are predominantly set in Britain (and many of them are among my personal favorites).

By way of background, the Golden Age is commonly taken to be the period between the two World Wars although this is more a convenient label than an accurate description. In fact many of these books were written well after the Second World War, but they continued to follow the traditional pattern and to make use of such much-loved literary devices as mistaken identities and mysterious foreigners, not forgetting the convenient side door which is customarily left unlocked.

Of course there were male writers too, and good ones at that. GK Chesterton, Anthony Berkeley, Edmund Crispin, and Nicholas Blake spring to mind at once, and an honorable mention should go to Freeman Wills Crofts, who not only could make a railway timetable seem positively interesting, but was the first of the Golden Age writers to introduce a professional police detective as a protagonist. Yet it is the four Queens who have stood the test of time and become the equivalent of household names in the world of crime fiction. Why is this?

It is a difficult question to answer in general terms since, as might be expected, each has her own strengths. Agatha Christie was a consummate plotter, though some find some of her characters a bit wooden. Sayers was probably the weakest plotter, yet her prose is magnificent, and generations of readers have fallen in love with Lord Peter Wimsey. Allingham challenges our sense of ethical integrity; there is a certain ambiguity about her detective, and on at least one occasion we are invited to believe that he has resorted to killing the murderer himself because he despairs of the ability of the prosecution service to bring the killer to justice. Tey’s output was limited in quantity, but was of outstanding quality.

Article continues after advertisement
It is the four Queens who have stood the test of time and become the equivalent of household names in the world of crime fiction. Why is this?

Her classic The Daughter Of Time was voted the best detective novel ever written by a Sunday Times survey. Such titles should be taken with a grain of salt, but the book (which examines the guilt of King Richard III, popularly understood to be one of history’s great villains) stays with one for years after reading. Even Tey’s first full-length detective novel, The Man In The Queue, is most impressive, memorably describing the bleakness of an investigation in which the police know almost nothing, not even the identity of the victim.

All the Queens made use of humor, with that lightness of touch that characterized the best of writing between the wars. The early “Miss Marple” books, for example, are surprisingly similar in tone to the “Mapp and Lucia” novels of EF Benson. And all of the Queens’ books were meticulously researched, with some based, at least in part, on real-life cases. Above all, they were the product of serious, professional writers. All four women wrote short stories, and most were also accomplished playwrights (Tey, whose real name was Elizabeth MacKintosh, under the pseudonym Gordon Daviot). Sayers wrote works of serious scholarship. Allingham was from a literary family and began writing as a child.

Detective fiction has always been regarded with mixed feelings by the literary establishment, many members of which have been disdainful of its populist appeal. Golden Age fiction in particular has prompted a variety of responses ranging from gentle satire to open criticism. In Snobbery With Violence (a term itself lifted from Alan Bennett) the critic (and crime novelist) Colin Watson imagines the classic English village of Mayhem Parva—equipped, naturally, with an early train to London and a local shop for buying such necessities as hair dye—where people are forever dying in horrible ways shortly after changing their wills. George Orwell was more direct; he referred to Golden Age detective stories as “that frightful torrent of trash”. In his essay “The Simple Art Of Murder,” Raymond Chandler, after making various pertinent and well-written observations about individual authors, observes that (then as now!) far too much crime fiction is published, and far too much of it is not very good. For him, genre is irrelevant; there is simply good writing and bad writing. Modestly, he gives Dashiell Hammett as an example of the former, citing The Maltese Falcon in particular.

Yet, as Chandler concedes in his article, the English style of detective story is subtly different from the American. Like a comedy of manners or a French farce, its narrative model makes certain demands on style and structure. Staples such as the second murder, the misheard snippet of conversation, the whereabouts of key characters at the precise moment when the lights went out, and how a potential murderer might have concocted a deadly poison from common garden ingredients can at show as creaky plot mechanisms in unskilled hands. But in the hands of a master—or a Queen—they can integrate seamlessly into a work of exquisite precision, a story for which we are happy to suspend disbelief for a few happy hours while we hope that the nice lady who runs the local sweet shop will not after all turn out to be a vicious serial killer.

This is, however, literature of the past, and while a vacation in yesterday can be an enjoyable escape, its descendants now frequently find themselves derided as “cozy crime”. Footprints in the rose bed suddenly seem hackneyed in much the same way as one might suddenly notice that a pair of comfortable slippers have become old and shabby. The magic has faded. The clockwork is running down. People no longer have manservants or Hispano Suizas, and to be seen drinking cocktails in the middle of the afternoon can seriously damage one’s career prospects.

Yet the need for such escapism has never been greater. Since the beginning of the Second World War—ostensibly the end of the Golden Age—we have been constantly exposed to the depths of human brutality. For some time after 1945 there was learned critical discussion as to whether the novel, which was seen as an essentially frivolous art form, could even survive in a post-Auschwitz world. Fortunately, the doubters have been proved wrong; the human cultural psyche is one in which the narrative tradition is deeply embedded.

With the advent of the post-WWII American “Noir” style (and its more contemporary offshoots, including so-called “Scandi Noir”) crime fiction essentially became bifurcated. On the one hand we have cozy crime, which panders to our escapist tendencies but increasingly strains our credulity. On the other we have dark, gritty narrative that speaks to the essential bleakness of much of what we see around us, but offers little refuge from it. So yes, we have a choice, but largely one that pushes us towards one extreme or the other. Happily some new writers are emerging who can tread a middle path, taking what is good from the Golden Age—even while poking gentle fun at it—and blending it into our present environment.

And we still have the Queens of Crime, whose fiction is good enough to transcend the ravages of time. As Chandler said, there is only good writing and bad writing, and the best of the Golden Age is very good indeed. To step into the streets of St Mary Mead by simply opening a book is like walking into Narnia by pushing through the back of a wardrobe. We hear the church clock ringing the hour (teatime, naturally), we see Miss Marple strolling towards the vicarage where a corpse awaits discovery on the hearthrug, and we sigh contentedly because we know that we are back among friends. Oh yes, sooner or later the telephone will ring, or the doorbell, and we will have to step back through the wardrobe into the real world but not yet, please, not yet.

Guy Fraser-Sampson is the author of What Would Wimsey Do? (Felony & Mayhem, 2019), the first in the "Mysteries of the Not-Quite Golden Age" series. He has also written three Mapp and Lucia books. In his spare time he is an internationally known expert in financial management, with experience in the US, the UK, and the Middle East. 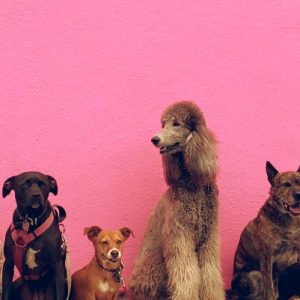 It starts with a tennis ball. And a very sensitive nose. That puppy you see in the park with its owner might look like...
© LitHub
Back to top