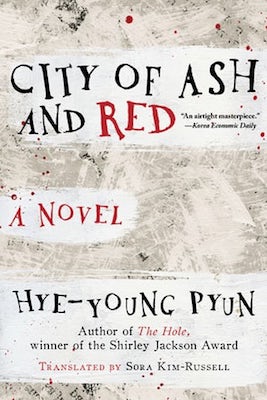 The following is an exclusive excerpt from City of Ash and Red, by Pyun Hye-young, whose chilling work of horror, Hole, won the Shirley Jackson Award in 2017. Her new novel is another gruesome masterpiece, following a rat catcher accused of murder in a dystopian future.

Having finished his clumsy detective work, the man shook his head. Regardless of whether he or Yujin was the culprit, there was no way he could have blacked it out so completely, no matter how much he’d drunk that night. This wasn’t some childhood nightmare that you forgot once you were all grown up. You didn’t forget a thing like that.

He grabbed some of his rationed bread and chewed it slowly. It was sweet. His sense of taste bothered him. How could bread still taste sweet at a time like this? But he tore off pieces of the hard bread with his teeth anyway, took his time chewing, and swallowed it slowly, bite by bite. That was all he could do for now to keep himself alive.

He recalled that while he was drunk he had been clutching something in his hand the same way he was now clutching the bag of bread. That had to be where the bruise on his palm had come from. The last piece of bread that he had so optimistically put in his mouth got stuck in his throat, and he finally had to spit it out. What was in his hand that night? He couldn’t be sure. This was not a problem of memory but of sensation.

He walked around the house, picking up things that he might have held that night: a heavy ballpoint pen, a rolled-up notebook, a hard leather pencil case, wooden chopsticks. All sorts of items, one after the other. Then, though he did not want to, he took the kitchen knife out of the sink and squeezed the handle. When he gripped the curved handle of the knife, his palm trembled, as if recognizing a feeling that was at once strange and familiar. Fearful of that tremor, he released his grip. The knife fell to the floor.

The dropped knife was as stiff as the look on his face. He opened and closed his empty hand. Just because the knife had felt familiar, just because he could still feel it in his hand, just because his hand remembered the exact sensation of it, did not mean that he had stabbed his ex-wife. Knife handles were all the same, any one of them would feel familiar at first. But regardless of the truth, the moment he picked up the knife and let it fall, the moment that uncanny tremor ran through his body, he felt the world coming toward him, a world as cold as a blade and as blunt as the heel of a knife.

The doorbell rang. He wasn’t expecting anyone, and in fact he’d never even heard the doorbell before, so it took several rings before he realized the sound was coming from his own apartment. Slowly and carefully, so as not to make a sound, he tiptoed over and looked through the peephole. Three men were standing in a semicircle, blocking the door. All three were dressed in street clothes and wore dust masks.

Just because the knife had felt familiar, just because he could still feel it in his hand, just because his hand remembered the exact sensation of it, did not mean that he had stabbed his ex-wife.

He assumed they were from the disaster management headquarters, visiting him as part of the quarantine procedures. The police had said the apartment building was on lockdown so that they could determine which of the residents were infected and take them to a separate center for treatment. On the afternoon of the first day of quarantine, he’d had blood drawn so they could test him for infection. They had told him the results would take a while, but maybe they were ready early. Or maybe the men were here because of his quarantine in the airport. The public health inspector there had told him not to leave his place of sojourn as they might visit him for a follow-up diagnosis. But they could also be detectives who had come to arrest the prime suspect in a murder case. They would have figured out right away where he was, and Country C had an extradition treaty with his home country.

He checked to make sure the door was locked before slowly walking over to the balcony and calling out in his native language. One of the men standing outside said his name. His name was difficult for foreigners to pronounce, especially for people from Country C, but the person outside not only understood him but also enunciated his name clearly. It had to be someone from the same country as him. They could have been from the company, but no one at the head office spoke his mother tongue fluently, and if they had to contact him, they would have used the phone. If this was to inform him of the results of his blood test or because something had been added to the quarantine procedure, then it would be a local health inspector, someone dressed in a hazmat suit, someone unable to pronounce his name correctly.

The three men pounded on the door and called out his name with perfect pronunciation. If he went with them back to his home country, with these men he was assuming were detectives, he would lose any chance to prove his innocence. He was a suspect, but he was not guilty. He could still feel the knife in his hand, but he knew he had not used it. And yet that was secondary. The main problem before him was the fact that he was their prime suspect. It was childish, wishful thinking for him to hope they would know he was innocent simply because he was.

He opened the balcony door and looked down. A sprayer truck must have just passed by: clouds of disinfectant roiled up from below. Crows flew past in the dark and lowering sky. He couldn’t see the ground through all that vapor, but he knew it would be piled high with black garbage bags giving off their vile yet familiar stench. They would break his fall. It was better than not knowing whether anything was down there at all, better than jumping with blind hope. The moment was so brief. He had no time to think or decide, pushed only by the instinctive fear that said he must not get caught. But he believed there was more to what he did next than simply his not being a criminal. Though he did not know it yet, he would have to suffer for a very long time the disillusionment of knowing that, in the end, he alone had reduced himself to garbage. He heard a keycard slide into the lock. They must have gotten it from the building super-intendent. The deadbolt would slow them for a moment, but soon that too would slide open. Just as the door swung wide, he stifled another cough and leapt into the garbage below. 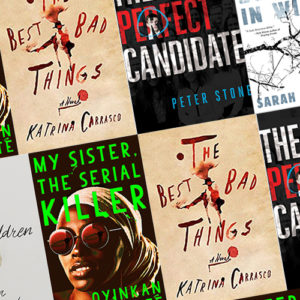 6 Debut Mysteries & Thrillers to Read This November Breaking into the crime game isn’t easy, but every month, a few brave and talented souls make a go of the mystery racket....
© LitHub
Back to top