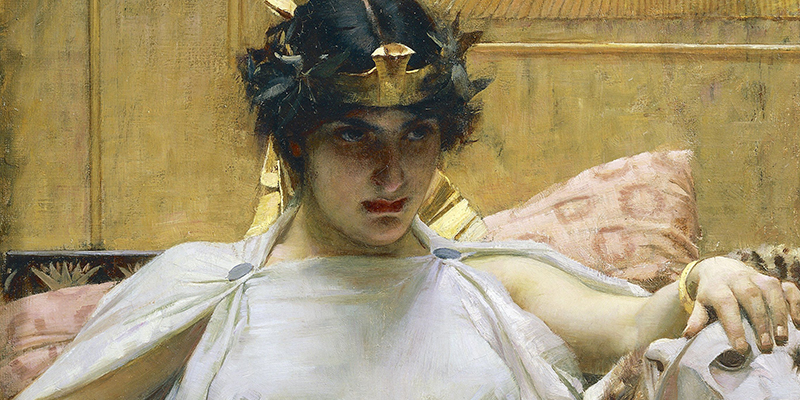 In Roman eyes, a woman in power was unnatural, and Cleopatra could only have gained that power because she was evil.

Honestly, I think historians are all mad.
—Josephine Tey, The Daughter of Time

Full disclosure: I’m not an historian. I’m not even a scholar. I do write crime fiction, however, which means I think a lot about motive. While I yield to none in my respect for the intelligence, insight, and industry historians bring to their work (it’s my favourite form of non fiction), too many of them have a positive knack for ignoring normal human behaviour in parsing out in print why their subjects do anything.

Cleopatra in particular comes in for more than her share of magical thinking. For example, the author of a recent biography of Julius Caesar writes

Probably in late 46 BC Cleopatra, her brother-husband Ptolemy and their court arrived in Rome. Cleopatra…may well have felt safer near [Caesar] and away from Egypt.

Okay. Let’s take a step back here so we can see the whole picture. The Ptolemies were Greeks. Alexander the Great took Egypt by force and founded the city named for him. His general, Ptolemy, snapped it up as spoils of war after Alexander died. There followed three hundred years of the Greeks in Alexandria keeping the Egyptians along the Nile barefoot and pregnant and down on the farm, and three hundred years of the Egyptians revolting and rebelling and generally making nuisances of themselves to their rulers in Alexandria.

Historians agree on very little about Cleopatra, but one incident they all refer to is that sometime during Ahket (Inundation) of the same year her father, Ptolemy XII, died, Cleopatra travelled to Thebes to escort the new Buchis bull to the temple of Mont, the Egyptian god of war. It is her first recorded public act. She presented herself as the goddess Isis on earth specifically to the Egyptian citizens of her realm.

The subtext here is blindingly obvious: “I’m not like the rest of those idiots who came before me, I hear you, I see you, I respect your customs and gods, I am one of you, you don’t want to rebel against one of your own.”

The Egyptians rebelled against every single Ptolemy but one: Cleopatra VII. She reigned for 20 years. If they’d wanted to rebel, they had time.

Having begun her reign in propitiating her Egyptian subjects in this manner, it makes no sense that she would then go tarryhooting off to Rome immediately after regaining her throne. No sane ruler (and, albeit grudgingly, most historians then and now do at least pay lip service to her intelligence) would abandon her subjects to insurrection in her absence. Nature abhors a vacuum, and capable rulers knew that long before Aristotle. And Cleopatra would have read Aristotle.

Further, Caesar left three legions behind when he departed Egypt. Now, that may in truth have been to secure the Egyptian grain the Roman army marched on, but those three legions would also have made Cleopatra’s throne feel that much more secure beneath her backside. May well have felt safer in Rome, indeed.

Not only does it make no sense for her to leave for Rome in December 46 as a ruler, it makes no sense as a woman, either, because Caesar left for Spain the month before to put down yet another Pompeian rebellion. I think it’s a safe bet that Caesar and Cleopatra were two of the smartest people alive at the time. I don’t doubt that there was a strong mutual attraction. But on occasion I do wonder if some historians ever met a woman.

It is also reported by contemporary chroniclers that Cleopatra’s sister, Arsinoë, inspired such pity in the Roman citizenry watching her march in Caesar’s triumphs that in response he commuted her death sentence to life imprisonment. Instead, Arsinoë was placed under house arrest in Ephesus.

I’ve been there. The toilets are made of marble. Yeah, that’s some hard time right there.

It is much more likely that Caesar was determined to keep a spare Egyptian queen in his hip pocket in order to keep Cleopatra in line. Cleopatra would have known that full well. The first thing she asked of Antony was for him to kill Arsinoë, which he did. Since the first thing she did following Caesar’s assassination was to kill her brother/husband/co-ruler, the subsequent death of Arsinoë cleared the field of rivals for her throne once and for all. There remained only Caesarion, Cleopatra’s son by Julius Caesar. She brought Caesarion with her to Rome when she finally did go there. If Caesar had lived, I doubt he would ever have let the child return to Egypt, or not until he was ready to take the throne. He was security for both his parents.

But I digress. Something I consider essential to a full portrait of the time has also been ignored by historians until recently, and that is the difference in status between Egyptian women and Roman women. Stacy Schiff in Cleopatra writes

[Egyptian women] inherited equally and held property independently. Married women did not submit to their husbands’ control. They enjoyed the right to divorce and to be supported after a divorce. Until the time an ex-wife’s dowry was returned, she was entitled to be lodged in the house of her choice. Her property remained hers, it was not to be squandered by a wastrel husband. The law sided with the wife and children if a husband acted against their interests… They loaned money and operated barges. They served as priests in the native temples. They initiated lawsuits and hired flute players. As wives, widows, or divorcees, they owned vineyards, wineries, papyrus marshes, ships, perfume businesses, milling equipment, slaves, homes, camels. As much as one third of Ptolemaic Egypt may have been in female hands.

Meanwhile, across the Mediterranean in Rome, women remained more properly at home, making dinner, babies, and linen shrouds to be buried in when they died of boredom. A woman in power in Alexandria, home of the Great Library and the Mouseion, the MIT of its time, and the most important trading port on the Mediterranean, would have been anathema to Roman men.

That one crucial thing was, of course, Marc Antony. But, again applying normal human reaction to the matter instead of a deliberately constructed Augustan mythology, what choice did Cleopatra have? Octavian, Lepidus and Antony carved up the Roman world between them and Antony got the eastern half, which included Egypt. Again, like Caesar, Antony was the Roman on the ground, the guy with the legions. She invited him to Alexandria and she seduced him into supporting her. It worked once before. It worked this time, too, until Actium.

After which Octavian, later Augustus Caesar, proceeded to remake Cleopatra’s image into the degenerate daughter of a debauched dynasty he needed to support his assumption of a lifetime gig as ruler of the known world. After all, in Roman eyes a woman in power was — shudder — unnatural in and of itself.  Perforce, Cleopatra could only have gained that power because she was evil, which equally was the only way she could have seduced Antony into rebelling against almighty Rome. How fortunate for Octavian that Antony killed himself, neatly saving Octavian from disposing of his only remaining rival and at the same time creating a martyr.

The story only needed a villain, and “The woman tempted me and I ate it” is an old, old story. Pax Romana! 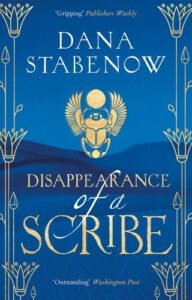 Dana Stabenow was born in Anchorage, Alaska and raised on a 75-foot fishing tender. She knew there was a warmer, drier job out there somewhere and found it in writing. Her first Kate Shugak book, A Cold Day for Murder, received an Edgar Award from the Crime Writers of America. She lives in Homer, Alaska. Find her online at stabenow.com. Her most recent historical novel, Disappearance of a Scribe, is now available. 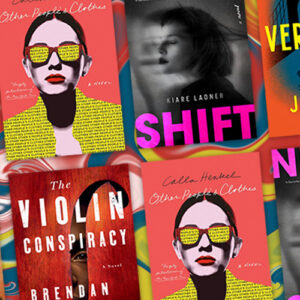 CrimeReads editors select the month’s best debuts in crime, mystery, and thrillers. * Brendan Slocumb, The Violin...
© LitHub
Back to top