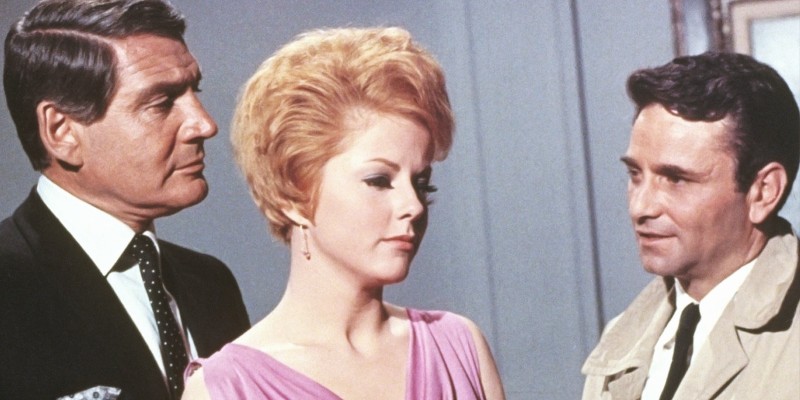 “Columbo” got a trial run on “Alfred Hitchcock” – and so did his first quarry.

As a character, Los Angeles police detective Lt. Columbo was famous for turning, just as he was about to leave a suspect, and asking, in a faux-confused tone, about “just one more thing.”

But in the years before Peter Falk helped “Columbo” creators William Link and Richard Levinson forge one of the most memorable characters in all of fiction, Link and Levinson seemed to have repeatedly stopped just short of the door to the office of Hollywood producers and executives and, in effect, proposed “just one more” early version of Columbo.

It’s not unlike how “Star Trek” creator Gene Roddenberry returned to the concept of an “emotionless” being learning how to be human, from Spock to the android hero of “The Questor Tapes” TV movie to Data from “Star Trek: The Next Generation.”

Who among us can say we’ve never recycled one of our ideas? These writing geniuses certainly get a pass for revising and revisiting the concept into the perfection that was “Columbo.”

In other words, try, try again was the motto of Levinson and Link. And “Columbo” fans are the better for it.

Literary roots and then on stage

Columbo as a concept, and a character, was around for years before Feb. 20, 1968, when “Prescription: Murder,” the first film featuring Peter Falk as the Los Angeles detective, aired. (The TV movie was a hit that led to the first season of “Columbo,’ airing in 1971 as part of the rotating “NBC Mystery Movie” anthology series.)

Columbophile and other websites have recounted how creators Link and Levinson spun the tale of the unorthodox detective more than once.

It’s been acknowledged that the character was based in part on the Petrovich character from “Crime and Punishment,” so there’s a literary ancestor to the lieutenant.

It’s fascinating to see the differences in Link and Levinson’s approach to the character in different attempts. The earlier efforts show their evolving take on the detective. Even “Prescription: Murder” with Falk presents an early, road-show portrayal of a character who was ultimately defined as among the most memorable figures in pop culture.

After “Enough Rope,” the authors in 1962 produced “Prescription: Murder,” a stage play featuring Joseph Cotton as the murderer. I wish I could see it and compare it to Cotton’s performance as Uncle Charlie in the classic 1943 Hitchcock film “Shadow of a Doubt.” Thomas Mitchell played the detective.

One of the most fascinating Columbo dry runs came in 1963. 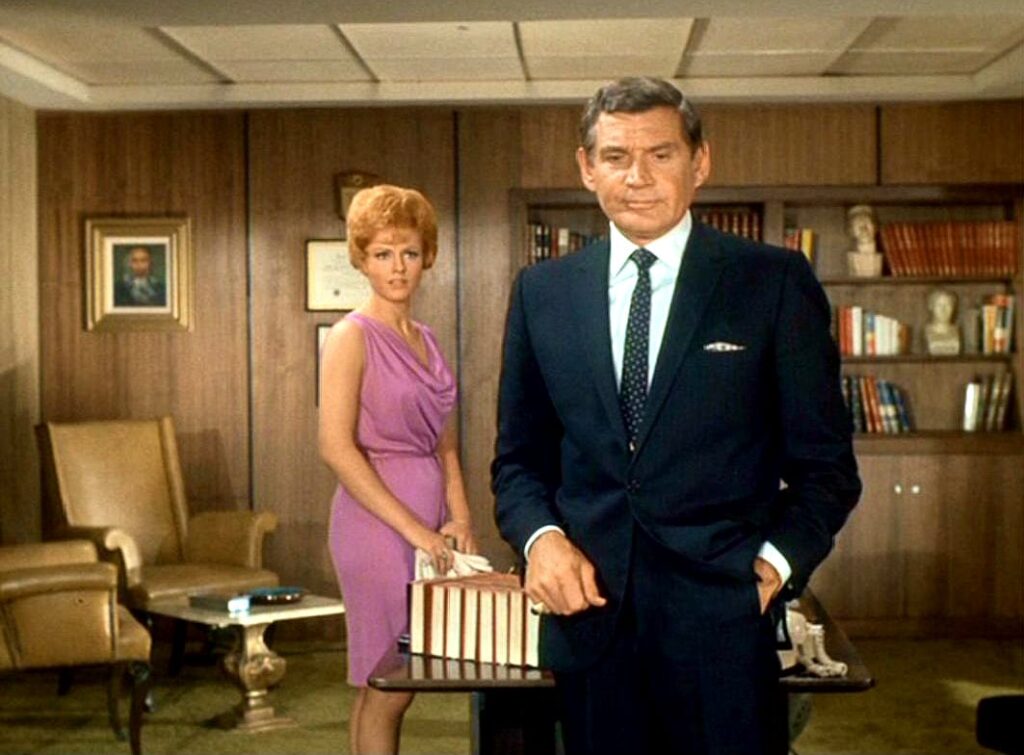 There’s no more interesting contrast in Columbo prototypes than the similarities and differences between “Dear Uncle George,” an “Alfred Hitchcock Hour” episode from May 1963, and the “Prescription: Murder” TV pilot from 1968.

Because although “Dear Uncle George” does not feature character Columbo or actor Falk, it does feature Gene Barry, the actor who played basically the same killer role five years later.

“Dear Uncle George,’ which is part of the “Alfred Hitchcock Hour” package on nostalgia channel MeTV and is also viewable online, features the suave Barry – best known for many TV series, including the western “Bat Masterson,” and movies including the 1953 science fiction epic “The War of the Worlds” – as the pseudonymous author of the Dear Uncle George advice column for a big-city newspaper.

As John Chambers, Barry tosses off casual answers to people who write in seeking his advice. He dictates them to his secretary. Like any good “Columbo” villain, Chambers believes he’s better than what he’s doing and better than most of those around him.

One particular day, a letter writer turns out to be a neighbor, and her missive unknowingly leads Chambers to conclude that his wife, Louise, is cheating on him with his friend, played by a so-young-he’s-almost-unrecognizable Dabney Coleman.

Chambers kills his wife and implicates the man he believes to be her lover in the murder, all the while expressing shock and sorrow over his wife’s death.

Investigating the crime is Lt. Wolfson, played by Lou Jacobi, an actor better known (to me at least) as a comedy actor for roles in films like “Everything You Always Wanted to Know About Sex (But Were Afraid to Ask),” “Arthur” and “My Favorite Year.” (The Canadian character actor died in 2009.)

There’s no question there’s a lot of Lt. Columbo in Lt. Wolfson. The detective has his own set of quirks, including his love of tea and his schooling of younger officers. 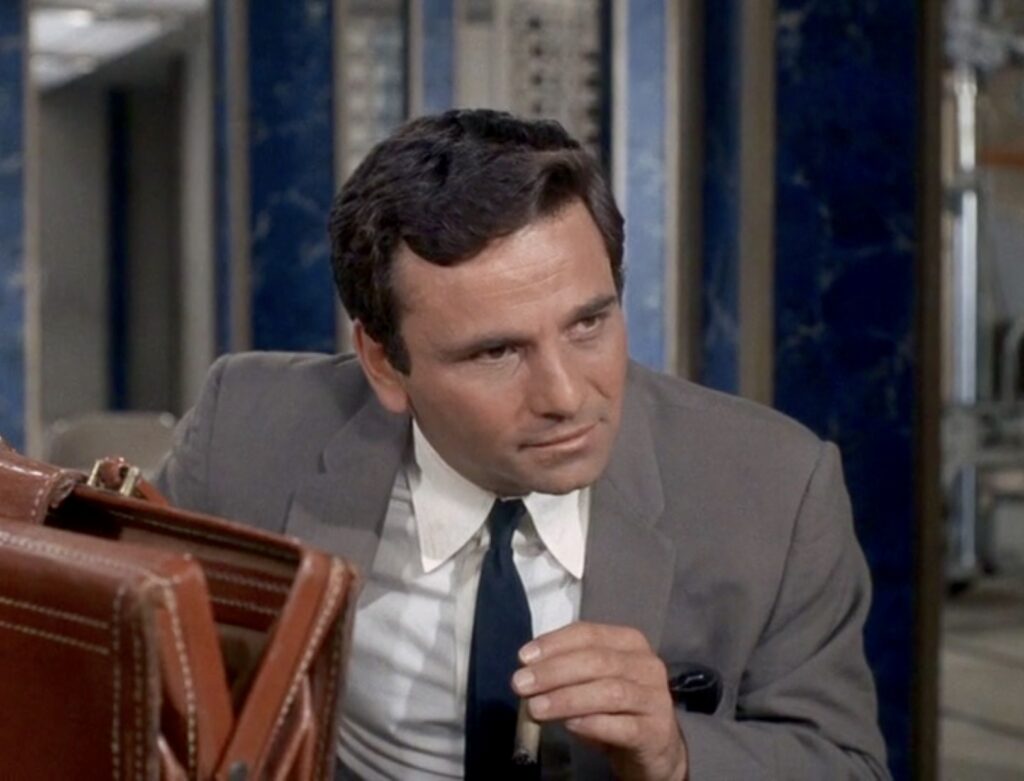 “Prescription Murder” is well-known to many as the origin story of Lt. Columbo, although there’s no true origin to be found. Columbo springs, close to full-blown but with details still to be filled in, in the TV movie in the person of Falk.

And he’s mightily abetted by Barry, returning to the role of murderous husband.

I wish I knew what Barry thought about taking a second run at the character he created in “Dear Uncle George.” No doubt he was ready to trust Levinson and Link, which was a good instinct.

Falk, looking impossibly young and neat, played Columbo here without all the mannerisms that became like comfort food to us over the course of the next few decades. In fact, if you watch “Prescription: Murder: expecting to see the Columbo you know, you might go away thinking, “Wow, that’s a really quirk-free version.”

In the TV movie, Barry played not a newspaper advice columnist but a psychologist, Ray Flemming, who kills his wife, played by Nina Foch. This is no crime of passion; Flemming wants her money and wants to be with his young girlfriend, played by Katherine Justice.

The two work out an elaborate storyline involving the girlfriend roleplaying as the wife on an airliner, getting into a snit and leaving the plane before it departs. This gives Flemming an alibi as it would appear he was out of town at the time. In reality, Mrs. Flemming was already dead at home.

The unsettling qualities of Columbo are obvious early on, when Flemming comes back in town and back to his apartment, only to find Columbo inside. Even more unsettling for the killer is the news that the woman isn’t dead but has so far been unable to identify her attacker. The only name she’d said so far, Columbo said, was that of her husband. She dies before she can elaborate.

Barry does a great job of playing cold-blooded killer acting as a grieving husband, so when Columbo begins to get on his nerves, he creates a template for every arrogant and irritable murder that would follow him in dozens of episodes to come.

Columbo begins to pick apart Flemming’s alibi and also, insidiously, works to crack the young girlfriend. It works. The finale, although not complex at all, is strong.

Link and Levinson struck gold with “Prescription: Murder.” Their creation, Lt. Columbo, is one that will live on forever. That’s thanks in large part to the cat-and-mouse game between the detective and the murderous conspirators.

Levinson and Link would go on to create other classic TV series, including one of my favorites, “Mannix,” as well as “Murder, She Wrote.”

If they revisited this storyline and once again cast Barry as an arrogant killer, I’m not aware of it. But more power to them. They more than deserved another run at it, although it would be impossible to top their proto-Columbos.

Keith Roysdon is a frequent contributor to CrimeReads and other online news and pop culture sites. He is a Tennessee-based writer whose fourth co-written true crime book will be published by History Press in 2023. His crime novel “Seven Angels” won the 2021 Hugh Holton Award for Best Unpublished Novel from Mystery Writers of America Midwest. He’s writing a young adult crime novel set in October 1984. 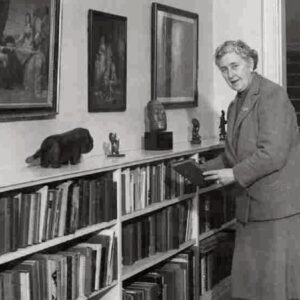 As the greatest-selling author of all time, in line behind only Shakespeare and the bible, Agatha Christie undoubtedly has a good...
© LitHub
Back to top