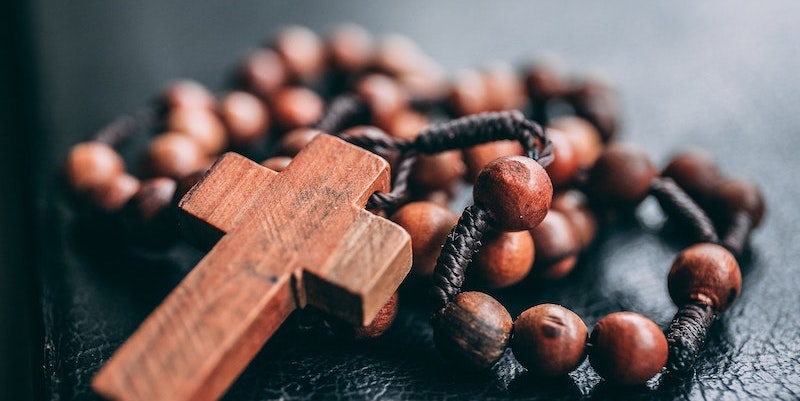 When Donald Cameron Clark, Jr. teamed up with a lawyering nun to save a man's life, he learned to look beyond expectations.

The first question was always the same. And there was only one acceptable answer. “Did you win?”

Trial lawyers are gladiators and the metric of success is unambiguous, often instantaneous, and always unforgiving. Whether arguing a pretrial motion or awaiting a jury’s verdict, the range of outcomes is blunt and binary: you either win or you lose. As a litigator for the venerable firm of Isham, Lincoln & Beale in Chicago, founded by President Abraham Lincoln’s surviving son, this was my professional life. I loved it. But I found myself needing more than just the challenge of winning a case. Increasingly, I needed the satisfaction of winning cases that others thought could not be won and achieving a substantial amount of justice.

Following reinstatement of the death penalty in state after state beginning in 1976, America’s death row population increased rapidly. Yet these convicted and sentenced prisoners—the majority of whom were illiterate and indigent—were effectively deprived of the assistance of a lawyer in mounting final challenges to their convictions and sentences because, unlike during their trials, they were not entitled to have a lawyer appointed to represent them in habeas corpus proceedings. There was an overwhelming need for lawyers who were willing to represent these defendants, especially during these appeals of last resort

In 1986, the American Bar Association created the Death Penalty Representation Project to address this need and sought volunteers to provide pro bono representation for men and women sentenced to death throughout the country. The solicitation to meet my ethical responsibility to offer legal service to those who could not afford it while at the same time meeting my professional ambition to win a case that seemed unwinnable had immediate appeal. I volunteered to take one of these cases.

On July 11, 1984, Tommy Hamilton killed Lehman Wood in Bankhead National Forest near the town of Moulton, Alabama. He was tried and convicted of murder committed during a robbery. Whereas a unanimous jury verdict was required to convict Tommy, Alabama law required that only ten of twelve jurors needed to recommend a death sentence for it to be considered and possibly imposed by the judge. After less than thirty minutes of deliberation, the jury returned a sentencing recommendation of death by electrocution by a vote of 10 to 2. On the minimum recommendation the judge sentenced Tommy to the maximum penalty. Tommy lost appeals to the Alabama Court of Criminal Appeals, the Alabama Supreme Court and the United States Supreme Court declined to review his case. It was then that the ABA informed me that, if I remained willing to volunteer to represent a death row inmate in post-conviction proceedings, I had been selected to represent Tommy Hamilton, who I could find on death row in the West Jefferson Correctional Facility in Bessemer, Alabama.

I knew that I needed help. In addition to the invaluable insights into the practices of local courts and the preferences or demands of their judges, local counsel was imperative for logistical reasons. I needed someone in Alabama who, on a moment’s notice, could attend a court appearance, file a pleading, and simply lessen the number of trips I would have to make to Alabama—thereby saving some of the attendant expense.

The ABA explained to me that its efforts to procure an Alabama lawyer as Tommy’s lead counsel failed for two reasons. First, Alabama does not provide meaningful compensation for attorneys who volunteer to represent clients in capital post-conviction proceedings. Second, the cases are so notorious and so politically charged locally, that any Alabama practitioner handling such a case risks becoming a pariah. Nevertheless, I strongly believed that it was imperative to have the assistance of local counsel, so I begged the ABA to find me someone—anyone.

The Benedictine Sisters of Cullman, Alabama, embody the spiritual wisdom and monastic tradition of St. Benedict through lives of prayer and ministry. Their ministry is both within the monastic community and to the world at large. Indeed, the Benedictine motto is Ora et labora: prayer and work. These external ministries take many forms. Some sisters are teachers, some are health-care professionals, and some, like Lynn, are lawyers.

In many ways we were an unlikely pair. A married suburban father of two young children who was accustomed to litigating for Fortune 500 companies in the third-largest metropolitan area in the nation, combining with a single woman committed to monastic life whose legal work was largely devoted to the problems that surfaced in a rural community. But on the fundamental issues of justice and mercy, we were identically committed. I embraced Lynn as a colleague; she quickly became a dear friend. And thus began the true story of a Chicago lawyer and a nun from Alabama who volunteered to represent a death row inmate and struggled to prove that he was not legally guilty even though he was not entirely innocent.

To save expense and have the most time I could with Lynn when I traveled to Alabama, I thankfully accepted room and board from the sisters at Sacred Heart Monastery. I slept in Gusmus Hall, a small guest house for overnight visitors built by the brother of one of the sisters. I would occasionally join the sisters for worship, which provided the treat of hearing Lynn’s angelic singing voice. Lynn would note that St. Augustine is credited with saying, “When you sing, you pray twice.”

I learned a lot during my representation of Tommy Hamilton in his final appeal: the fragility of life, the importance of ensuring justice for the guilty, and the limitations of binary thinking, among other things. It is recounted in my recently published book Summary Judgment – A Lawyer’s Memoir. And there were at least four things I learned from my time with the Sisters of Sacred Heart.

I confess that initially I was perplexed by the Sisters of Sacred Heart. Why would women today elect to confine themselves in a patriarchal, hierarchical faith like the Roman Catholic Church? Wasn’t monastic life a form of segregating oneself from the realities of the world? Was sisterhood a form of naivete?

But as I spent time with them, it became clear that these women are neither naïve nor sheltered. They are strong, socially aware, and dedicated to their work. To become a sister is not to place a restriction upon oneself. In certain ways, it is freeing, opening for them a world of possibility. Their vows are their manner of embracing the world, not rejecting it. Being a sister offers them opportunities to make both the Church and the world better. They see themselves as a bridge between what is and what could be. Constantly ministering to the suffering and oppressed can be exhausting and, at times, heartbreaking. It takes a person of courage to live such an atypical life.

While those of us in law firms catering to corporations were doing well in life, Lynn and her sisters were truly doing good.

Lynn was very idealistic about law practice. She wanted to rescue the lost and uplift the downtrodden, be a voice for the voiceless, and advocate for those who had been treated unjustly. At the same time, she was a workaday lawyer doing the best she could. Lynn’s office reflected her dual callings. In addition to law books on shelves and a diploma and various certificates on the walls, there was a framed cross-stitch in a bookcase that read: “Sister-in-law.” It was complemented by a woodcarving across the room: “Nun Better.”

Lynn’s days were structured around both of her vocations. A typical day began with the morning prayers at 6:30 a.m. followed by the communal breakfast in the monastery’s dining room. She was usually in her law office by 8:00 a.m. to meet with clients, do research, and confer with fellow lawyers. Sometimes she got back to the convent for the 11:30 a.m. Mass, but not always. Evening prayers were at 5:15 p.m. Afterward, she frequently ran back to the law office to stay on top of a heavy case load.

Nuns can walk and chew gum at the same time. And so can the rest of us.

You Got to Howdy with People

On one of my trips to Alabama, we decided to dig deeper into the history surrounding the testimony of jailhouse informant Jimmy Dale Owens. Sister Lynn and I went to Moulton, where Owen’s criminal court file was kept in the clerk’s office of the Lawrence County Courthouse Annex.

As Lynn and I approached the clerk’s desk, the woman behind the counter greeted me with a syrupy drawl and a smile from ear to ear. “How may I help you?” she asked. “I need to see the court’s file on Jimmy Dale Owens, a criminal defendant who was tried in Lawrence County several years ago. Do you have those files stored here or elsewhere?” I replied brusquely. I could sense Lynn beginning to pace uneasily behind me.

“Why do you need them, darling? The clerk oozed.

“I represent Tommy Hamilton,” I stated.

All the warmth drained from the clerk’s face. She became rigid. It quickly became obvious that she knew Tommy Hamilton was the convicted murderer of county icon Lehman Wood. “Well bless your heart,” she offered.

I was familiar enough with Southern culture by this point not to take her euphemism at face value, but I was pressed for time.

“Where can I get the files?” I asked curtly.

Sister Lynn pulled me out of the clerk’s office and upbraided me: “Don, you can’t do that! You go to howdy with people.”

Southern hospitality is a marvel, and Sister Lynn quickly schooled me on the subtle dance that is the Southern means of persuasion. I was appropriately chastened. My mistake was in treating the clerk of court for Lawrence County as if she was some patronage worker in Cook County, Illinois. The pressure I may have been feeling may have been an explanation, but it was no excuse for my behavior. If I could not remain disciplined with a court clerk, I likely would be destructively vulnerable to opposing counsel and the judge. I learned a valuable lesson.

Though she had never worked on a capital case, Lynn was passionately opposed to the death penalty. Her personal conviction could be expressed in a single sentence: Lynn believed that society did not need to be in the business of killing people to demonstrate that it is wrong to kill people. She also knew this: Everyone leaves death row. Few leave it alive.

In the world of true crime, you never know what might happen or who you’ll encounter. I am forever grateful that I met Lynn, as I learned a great deal from her. 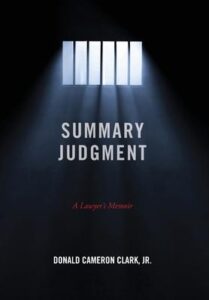 Donald Cameron Clark, Jr., Esq. is a renaissance man who believes in the power of storytelling, whether to a jury, to a theatre audience, or to his grandchildren. His legal practice focuses on high-stakes trials and religious liberty jurisprudence. Notably, Clark reversed the conviction of an Alabama death row inmate and established the constitutional right of clergy to solemnize same-sex marriages in North Carolina. His memoir, Summary Judgment: A Lawyer’s Memoir, is the firsthand account of two lawyers from Chicago and a nun from Alabama who volunteered to represent a death row inmate, fighting to prove that he was not legally guilty, even though he was not truly innocent. 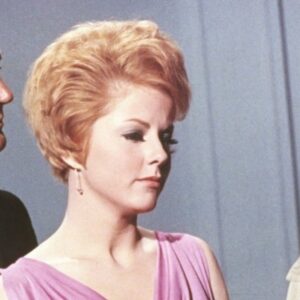 As a character, Los Angeles police detective Lt. Columbo was famous for turning, just as he was about to leave a suspect,...
© LitHub
Back to top