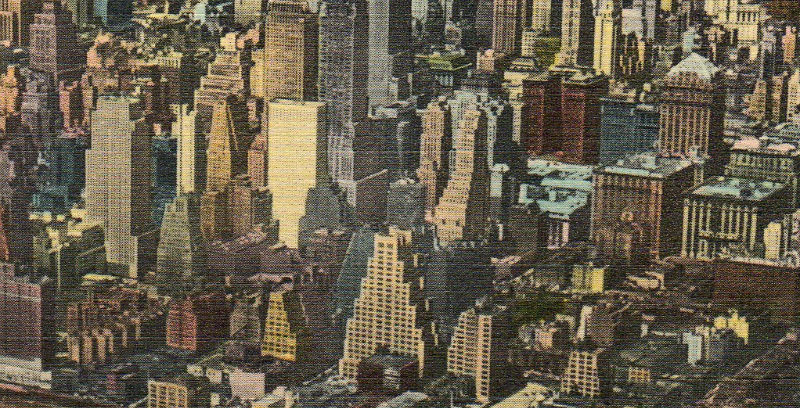 "If you love a place, every time you walk through it you commune with its ghosts."

A note of introduction from Alex Segura:

I’ve known Paul Levitz for a long time. We first met over a decade ago, in the DC Comics offices in midtown Manhattan. I was a nervous twenty-something hoping to get hired as a publicist, he was president and publisher of the house of Superman. Batman and Wonder Woman. I’d met a lot of great people that first day of interviews, but this was Paul Levitz. Legion of Super-Heroes “Great Darkness Saga” Paul Levitz. Editor of every title under the sun, Paul Levitz. There was no grilling. No pointed questions. No intense stares. In that brief 15 or 20 minutes, we were just two guys sitting together, talking about life. Sure, we were in an expansive, executive suite loaded with comics and memorabilia, and yes, Paul was the head of a massive media company, but in those minutes, it wasn’t about that. We talked about life. Reading comics. Moving to the big city. Balancing work and life. It was not what I’d expected at all, but that conversation sticks with me, and it was the beginning of what I like to think became a warm friendship over the years.

I’ve taken particular pleasure in Paul’s latest artistic chapter—unencumbered by the restrictions and responsibilities that come with the role of publishing executive, he’s been able to spread his wings as a full-time creator, with lengthy runs on established titles like his beloved Legion, writing wide-ranging, archival books like the DC Comics Taschen tomes and, Brooklyn Blood, his latest. Brooklyn Blood, created in tandem with artist Tim Hamilton and published by Dark Horse Comics, is Paul’s darkest, most unique piece of work—a gritty crime tale that follows Afghan war vet Billy O’Connor as he becomes embroiled in a deadly murder mystery. Paul showcases a keen eye for the genre, and paired with Hamilton’s sublime lifework and layouts, creates a wholly modern crime comic that is unlike anything he’s ever written, in the best way possible.

To my mind, the best works of crime fiction—graphic or otherwise—evoke a strong sense of place. The setting becomes as vibrant and important to the story as any singular character. Brooklyn Blood, in case you missed the title, is no exception. I’m honored to present Paul, in his own words, discussing the ghosts of his beloved Brooklyn.

If you love a place, every time you walk through it you commune with its ghosts. Many of them aren’t the shades of people who passed away, but are simply ghost images in your head…memories of things that happened to you in those spots, or connections to people or events you recall. Sometimes it can even be a no-longer-existent object, like a crack in the sidewalk that’s been paved over for years, but was an important danger in your childhood bike rides. Perhaps writers are particularly susceptible to this sort of haunting, as we spend a portion of our lives collecting items for what Stephen King called our ‘toolbox.’ Settings, as well as the moments we are recalling, are the clip art of our trade: images that may be used and reused, altered, disguised or raw, little pieces of the picture puzzles that are the stories we assemble.

New York is a particularly rich location for this sort of journey through the netherworld. Not only the largest and most cosmopolitan of American cities, it is also simultaneously among the oldest and the newest. The astounding growth of the city, and its absurd land values, mean that only the most precious gems survive for more than a lifetime or two, everything else getting torn down and repurposed. It’s unusually rich in unique stores and restaurants, to the extent that researchers have made the calculation that a person could eat each meal of a lifetime in a different New York eatery and never duplicate a venue. (Of course, that might be a much shortened lifetime after eating in some of the, shall we say, less appetizing, dining spots.) For every Starbucks, the city still has a hole-in-the-wall coffee shop with a personality all its own.

Even the individual streets and neighborhoods are powerful tools to conjure with. Words like Broadway and the Bowery carry with them identities, even after the identities have passed (once the Bowery was the entertainment district we now think of when the word Broadway is spoken, then the flophouse row the name still connotes, and now is becoming something else entirely). Brooklyn was the city of churches once, then arguably the first American suburb, then the rough and tumble streets for immigrants, and now, the prized destination of a generation of youth gearing up for the gig economy.

As a terminal New Yorker, the ghosts crowd my consciousness constantly. Events of my life, replaying themselves; spots that were once places I wanted to go, but never walked in before they disappeared into rubble or renovation; and the map of history, superimposed on the streets of today. Is it the Coney Island Plank Road (for the wooden boards that once ‘paved’ it) or Coney Island Avenue? Where exactly did vanished blocks of Greenwich Street mark the northern border of the Village, just below the window of the building where I’m writing this? Who lived here, who died here…and why?

Not surprising that I’m a sucker for New York-set historical fiction, from Caleb Carr’s intricate mysteries to Victoria Thompson’s neighborhood-named cozy murder mysteries. Or simply films and television shows that really utilize the city’s more contemporary complexities, a ride we might be on for The Taking of Pelham 123. When I set out to write my first original crime story, I knew I wanted to take advantage of the city I loved and knew. The difficult choice was between doing a historical piece (ah, to write characters like Theodore Roosevelt or Jimmy Walker—the real Jimmy Walker) or doing a current story with all the city’s multi-cultural layers and complexity (is there another place on Earth with as many languages, customs and religions bumping against each other every day, mostly in harmony). But as true child of the city, I wanted my cake and to eat it too. No tantrums. Just a New Yorker’s determination to find a solution to a puzzle that had baffled others.

In the end, the solution was obvious: use the ghosts.

There’s so much of New York’s history that its dwellers are oblivious to on a daily basis. Not only the might-have-beens (walk where Robert Moses wanted to plow an expressway through the heart of Greenwich Village, paving over a park that was once a bus turnaround, before that a parade ground, and longer ago a potters’ field), but the once-was places. A decisive battle of the Revolutionary War might have happened here, but this is not Boston, sealing off and making Bunker Hill a sacred site that a shining ‘Freedom Trail’ leads you to. We have, at best, tiny markers of spots within the battle, hidden deep in parkland on unpaved paths. And if anyone walking the busy streets of Park Slope thinks about the airplane that crashed there in living memory, they don’t seem to give it a second thought.

If you love a place, every time you walk through it you commune with its ghosts. Many of them aren’t the shades of people who passed away, but are simply ghost images in your head…memories…

I started in Brooklyn both because I started there, and because it has become an aspirational destination for a generation. (“We worked so hard to get out of Brooklyn why are you moving there?” “It’s not the same, dad.” Indeed it is not.) And because, coincidentally, a very small arc of Brooklyn contained three of the city’s great tragedies, and corpses from a fourth. For a time, the plot seemed to lead to the Twin Towers and its horrifying end, but ultimately it refused to cross the East River, and simply went upriver to under-appreciated Queens, and another of the great historical tragedies.

Why don’t New Yorkers memorialize these places more, or devote more energy to celebrating the many, many past accomplishments within the city limits, now obscured within unmarked, unremembered buildings that once contained magic? (Walk past aging SoHo office building that once housed the birth of Wonder Woman, Tales from the Crypt and MAD Magazine if you do the homework to identity it by its address, since there’s no other sign.) Perhaps it’s because New York’s pace doesn’t allow it; the city is about what’s about to happen, not what has happened. Boston can celebrate its past, whole European cities can morph into museums, but New York is too damn busy. There’s work to be done here, and anyone slowing it down should get the hell out of the way.

So Brooklyn Blood became a story with roots firmly planted in the past (a reward to those armchair detectives reading along who could appreciate that level of the tale), a sturdy trunk built on the Finest of my generation (when New York’s Police force felt as Irish as Dublin’s), and branches that stretched into thoroughly contemporary matters from the trauma of our veterans to the difficulties of assimilation for some of the more-recently-arrived immigrant tribes in New York. And the shadows of the tree, well, they go into darkness and our uncertainties that the world is as straight-forward as our parents taught us: a cynicism and fear that goes back to the dawn of time.

Think about the ghosts around you next time you walk the streets of your town. Perhaps the history isn’t as rich in violence as Brooklyn’s, with the constant churn of new arrivals and arrivistes it has experienced, but the ghosts are all around you. Stop to acknowledge them, and maybe they’ll become the puzzle pieces of a tale you can tell.

Paul Levitz is the author of the new novel, Brooklyn Blood. Levitz is a comic fan (The Comic Reader), editor (Batman), writer (Legion of Super-Heroes, executive (30 years at DC, ending as President & Publisher), historian (Will Eisner: Champion of the Graphic Novel, Abrams ComicArts, 2015)) and educator (including the American Graphic Novel at Columbia). He won two consecutive annual Comic Art Fan Awards for Best Fanzine, received Comic-con International’s Inkpot Award, the prestigious Bob Clampett Humanitarian Award, the Comics Industry Appreciation Award from ComicsPro and the Dick Giordano Humanitarian Award from the Hero Initiative. His 75 Years of DC Comics won the Eisner Award, the Eagle Award and Munich’s Peng Pris, and has been released as three separate volumes in 2013-5. His over 400 comics have been collected in over 20 graphic novels, and he is the first writer to have appeared on the New York Times Graphic Books Bestseller List for both fiction and non-fiction. Levitz also serves on the board of the Comic Book Legal Defense Fund, and Boom! Studios. He teaches at Columbia, Manhattanville and in Pace’s undergraduate and graduate program.

Home from World Pizza I sat in front of the west-facing window in my upstairs office and looked out at my rancho.  Twenty-five...
© LitHub
Back to top