Sleuth (1972): Olivier and Caine in a Country Estate

In an attempt to keep secret the fact that only two actors appear in the entire film, several names are listed in the opening credits, including Eve Channing, who is then listed as Margo Channing in the closing credits. Margo Channing, of course, is the name of the famous character played by Bette Davis in All About Eve, the classic film directed by Joseph L. Mankiewicz in 1950. She is supposed to have played Laurence Olivier’s wife, Marguerite, but the character is never seen except in an idealized painting and a single photograph on the wall of the mansion. The person seen in that photo is actually Joanne Woodward. 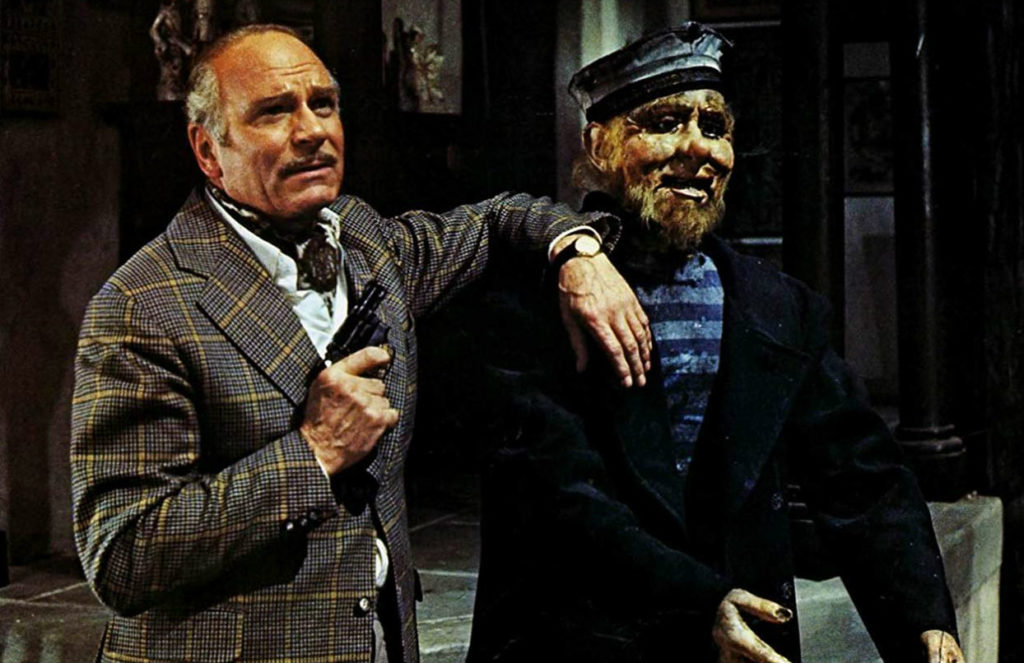 Milo Tindle, owner of a couple of moderately successful hair salons in London, is invited to the country estate of Andrew Wyke, the fabulously successful writer of best-selling detective novels. Wyke makes it clear that he knows Tindle is having an affair with his wife but, instead of being angry or pained, is delighted to be rid of her and offers financial help to Tindle so that he’ll be able to keep the spendthrift Marguerite in the style to which Wyke has allowed her to become accustomed.

Wyke, inordinately fond of games, the more complex the better, suggests that Tindle steal Marguerite’s jewels, worth a quarter of a million pounds, and he’ll help Tindle fence them while he, Wyke, collects the insurance money. To make the theft more interesting, he insists that Tindle wear a disguise, and they settle on an outrageous clown costume. Tindle follows all of Wyke’s carefully worked out plans, including using a ladder to sneak through a window and blowing the safe open with dynamite. Suddenly, the novelist reveals that he has no plans to give up his wife and that he concocted the scheme so that he could shoot Tindle as an intruder. In spite of the younger man’s pleas, Wyke holds a handgun to his head and pulls the trigger.

Soon after, a police inspector arrives to question the wealthy novelist about Tindle’s disappearance and, searching the premises, finds evidence that the hairdresser had been there and met a bad end—Wyke’s claims that he had shot his rival with a blank notwithstanding. Just as the case against Wyke seems certain, the policeman reveals himself to be Tindle in disguise.

Although the aging Wyke, close to a heart attack, is relived to know that he was merely the victim of the younger man’s trick and that he won’t be arrested for murder, there is still a surprise in store for him. Tindle tells him that he has murdered Wyke’s mistress, providing enough evidence to convince Wyke that he is telling the truth, and tells him that he has called the police to arrive in fifteen minutes. Four clues have been planted in the house that will prove that Wyke committed the murder and he must find them, using Tindle’s hints, in order to save himself.

Wyke’s frantic search unearths the clues, and Tindle tells him it was all a hoax after all and that his mistress was an ally. The unrelieved pressure has been too much for the normally rational Wyke and he grabs Tindle’s gun and shoots him with it, just as police sirens are heard and their lights come into view. Just before he dies, Tindle says, “Tell them it was only a game.”

As perhaps the greatest mystery play ever written, Sleuth’s cleverness was changed hardly at all for its motion picture version by Anthony Shaffer, who wrote both versions. The twists and turn of the plot are rivaled only by Witness for the Prosecution for the honor of being the most distinguished stage presentation of a mystery.

At the time of the filming of Sleuth, Sir Laurence Olivier was the only actor ever named to be a lord, and Michael Caine was nervous how to address his costar. Shortly before filming began, Caine unexpectedly received a letter from Olivier, announcing that “One minute after we meet, I shall call you Michael and you will call me Larry, and that’s how it will remain forever.” In fact, Sir Laurence Olivier insisted that everyone with whom he worked call him “Larry” throughout his extraordinary career.

Director Mankiewicz asked Olivier during a rehearsal if he could think of a way to make the now-aging actor seem more attractive, and more “literary” while he was at it. The great actor suggested a simple thin mustache, and it gave him exactly the look Mankiewicz was seeking.

Sleuth was nominated for an Academy Award for Best Director and both its stars, Olivier and Caine, also received nominations for Best Actor, losing to Marlon Brando’s portrayal of Don Vito Corleone in The Godfather, which also won as Best Picture.  Anthony Shaffer won an Edgar Allan Poe Award from the Mystery Writers of America for his screenplay.

Inspector Doppler to a smug Wyke: “Is there nothing you would not consider a game, sir? Duty, work, even marriage?” Wyke replies, “Oh, please, inspector, don’t include marriage. Sex…sex is the game, marriage is the penalty.” 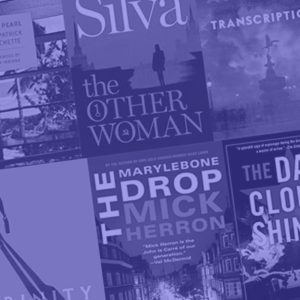 There are many areas of the crime and mystery world to be excited about in 2018, where startling new stories are being told...
© LitHub
Back to top