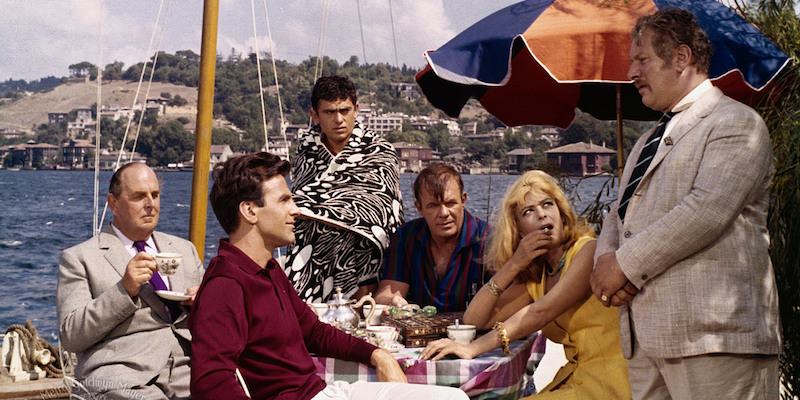 Peter Ustinov won an Academy Award for Best Supporting Actor for his role as the sleazy Englishman Arthur Simpson. Along with his many other awards, he keeps the famous gold statue, perhaps the most important award any actor can win, in a glass case in his bathroom. Someone suggested to the much-loved actor that this room seemed to be lacking in dignity for something so important, but Ustinov maintained that it was the only room in his house where he could comfortably admire the monuments to his achievements without appearing egotistical. 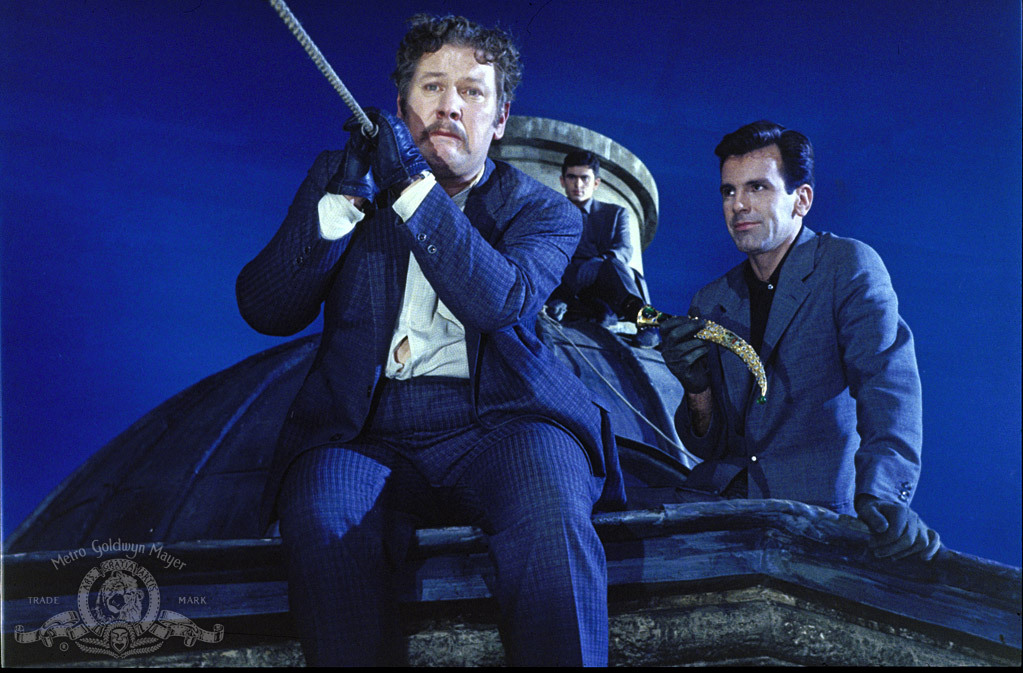 Elizabeth Lipp (not her real name, she quickly confides) has a passion to steal a fabulous jeweled dagger from Istanbul’s Topkapi museum and has her lover (though she hasn’t seen him for three years), William Walter, design the plan. He decides that the other necessary members of the gang that will pull off the caper must be amateurs, and he recruits a strange coterie. Cedric Page is an inventor and electronic genius, Giulio is a mute acrobat, and Fischer is the muscle.

While still in Greece, where the plans have been laid, Elizabeth and William Walter hire Arthur Simpson, an unsuccessful con man, to drive their car across the border into Turkey. They fail to tell Simpson that a rifle and grenades are hidden in the car. When Simpson is caught at the Turkish border, he is forced to work undercover for the Turkish police—who believe they have uncovered a terrorist plot—or he will be sent to jail. Simpson infiltrates Elizabeth’s gang of thieves. Their drunken cook misunderstands some overheard conversation, believes the crooks are a gang of Soviet spies, and imparts the information to Simpson, who passes it on to the Turks.

Meanwhile, Page had figured out that the floor of the museum is weight-sensitive once the alarms are turned on, so even the slightest pressure will set off the alarms. The plan is to enter from the roof, with Fischer holding a rope while Giulio is lowered and removes the dagger from its case without touching the floor. When Fischer’s hands are injured, the gang decides to recruit Simpson, offering him $10,000 to lower Giulio instead. He writes a note to himself, resigning from the Turkish Secret Service, and flushes it away.

The meticulously planned robbery goes exactly as planned except that a small bird has flown in through the same window used by Giulio. When it lands on the floor, alarms go off and the theft is discovered, sending the entire gang good-naturedly into prison, where Elizabeth hatches a new scheme to steal the Russian crown jewels.

Although it is one of the handful of best comic caper films ever made, Topkapi was not a huge box office success. Clearly, the ending suggested that a sequel was planned, but it never happened in spite of a decade of rumors.

Jules Dassin, the producer and director, was married to Melina Mercouri, the star. He had previously made a first-rate caper film in France, Rififi, which lacked the many comic elements of Topkapi.

The source novel for the screenplay, The Light of Day, is the only novel by Eric Ambler, one of the great espionage novelists of all time, that did not involve spies and international intrigue of a serious nature.

Bruce Geller, the creator of the immensely popular television show, Mission: Impossible, claimed that Topkapi was the inspiration for his series.

The gang, secure in the knowledge that the caper had gone off as planned, go to the police station to tell them of their astounding discovery: weapons in their car. The alarm goes off during their visit and the police officer learns what has happened, and tells them, “I know why you are here.” The surprised Simpson says, “You do? Do you really, sir?” And the policeman replies, “Yes, Mr. Simpson. A little bird told me.”

Deadwood: The 10 Crimes That Explain Everything

Deadwood: The 10 Crimes That Explain Everything

Deadwood, arguably the greatest television series ever made, was a western, or possibly a morality epic, or maybe a social...
© LitHub
Back to top