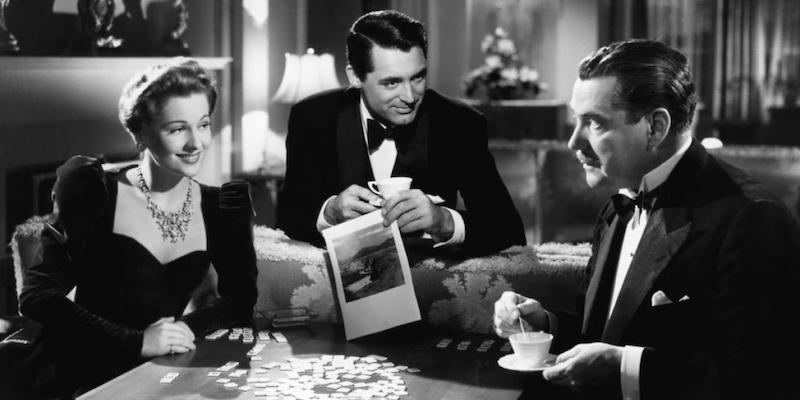 Alfred Hitchcock hated the title, writing in a memo that “Suspicion is such a cheap and dull title and makes it sound like a B picture.” He preferred the title of the book on which the film is based, Before the Fact, but polls showed a lukewarm response from audiences. At this time, George Gallup often polled moviegoers about potential titles for works in progress, and Before the Fact did poorly. Hitchcock suggested Fright. The studio suggested Suspicious Lady, and soon as many as fifty titles were being considered and polled, including Search for Tomorrow, Girl in the Vise, Love in Irons, Men Make Poor Husbands, and Last Lover. Finally, Hitchcock pushed hard for Johnny, but polls showed that Suspicion was a three-to-one choice over its nearest competitor and opened to great box-office success.

The charming and handsome Johnny Aysgarth meets the prim wallflower Lina McLaidlaw and they quickly fall in love and elope. After a long honeymoon, they return to a lavish house and furnishings ordered by Johnny, who turns out to be penniless, counting on his wife’s income to support them. Lina insists that he take a job and, to placate her, he does, only to be fired for embezzling two thousand pounds. When she learns of his thievery and the frequent lies he has told her, Lina packs her bags to leave him, but then realizes she loves him too much to go away. Just as she tears up her farewell note, Johnny hands her a telegram informing her of her father’s sudden death. At the reading of the will, Lina and her husband learn that he has left her nothing, clearly because he had always distrusted Johnny.

Soon after, Johnny’s bumbling friend Beaky Thwaite comes for a weekend visit and Johnny draws Beaky into a real-estate deal that will require a large investment. Lina has visions of Johnny killing his friend for the money but is relieved to learn that, in fact, Johnny saved his life. A few days later, however, her fears resurface when Beaky and Johnny are in London together and Beaky dies. The cause of death is a glass of brandy, and Lina’s neighbor, a writer of mystery novels, tells her that Johnny recently borrowed a book in which brandy is the murder weapon.

New fears arise when Lina discovers a letter in which Johnny has inquired about borrowing against her life insurance policy. Since she can collect only in the event of her death, she begins to fear for her life. At dinner, Johnny asks the mystery writer and her coroner husband about undetectable poisons, convincing Lina that that is how she will meet her end. Lina is unable to sleep that night and Johnny brings her a glass of milk, which she won’t touch, convinced it is lethal. She decides to stay with her mother for a few days and Johnny insists on driving her, speeding wildly along the way. When the passenger side door swings open, Johnny reaches across the seat to grab her and she pulls away from him. She believes he was trying to push her out, while he furiously explains that he was trying to save her. Now she knows Johnny wanted the poison to commit suicide because of his inability to pay his debts, and he admits he had considered it but decided that jail was a better choice. She begs his forgiveness for doubting him, and he turns the car around to return home.

From the beginning, the conclusion of the film was a problem, with conflicting desires of the studio, Cary Grant, Hitchcock, the Production Code, and audiences.

In the book, Aysgarth poisons his wife with a glass of milk. The Production Code, however, prohibited a murderer from surviving and profiting from his crime. Furthermore, RKO was convinced such a downbeat ending would prove unsatisfactory to audiences. And, finally, Grant was not very pleased about being cast as a wife-killer.

A different ending was proposed in which Lina, pregnant, knows she is going to be poisoned but allows her husband to kill her and their unborn baby, because she doesn’t want the blood of the murderer to flow into the next generation.

Yet another ending had Johnny confessing to his sins as a liar and a gambler who failed to pay his debts, then joining the RAF to try to atone.

Another proposal was that Lina meet another man, have an affair, and then allow herself to be poisoned, partly in contrition. Preview audiences openly laughed at this one.

Finally, the present ending, in which all the thoughts of murder emanate from the imagination of Lina, was found to be the least objectionable. Audiences liked it, therefore RKO liked it, Grant liked it, the Production Code had no problems with it, and Hitchcock accepted it, though he always maintained that the ending he really wanted was to have Johnny poison Lina, who, knowing she was going to be murderer, had written a letter to her mother reaffirming her love for him but exposing him as the murderer: Just as she drinks the poisoned milk, Johnny drops the letter into the mailbox.

In the famous scene in which Johnny carries the glass of milk up the stairs and into his wife’s bedroom, the camera focuses on it, just as Lina’s eyes do. Hitchcock had planted a lighted bulb inside the glass to make it glow slightly but compellingly; it is impossible to take one’s eyes from the menacing glass.

Suspicion was nominated for an Academy Award for Best Picture, and Joan Fontaine won for Best Actress, defeating her sister, Olivia de Havilland, who had been nominated for her role in Hold Back the Dawn. Forty years later, Fontaine assured the world that the famous feud between the two had never really existed and, besides, it was de Havilland’s fault.

Lina McLaidlaw has been afraid that her husband Johnny planned to murder his old friend Beaky in order to make a small fortune in a real estate deal. When Beaky tells her how Johnny saved his life, she is relived and says, “Johnny, I can never tell you how much this means to me.” Beaky responds, “It means a good bit to me, too.”

The Traditional Mystery: A Roundtable Discussion 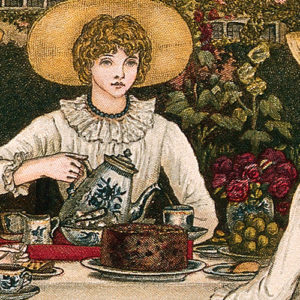 The Traditional Mystery: A Roundtable Discussion

This weekend, Malice Domestic approaches, and thousands of cozy and traditional mystery fans will descend on Bethesda, Maryland,...
© LitHub
Back to top