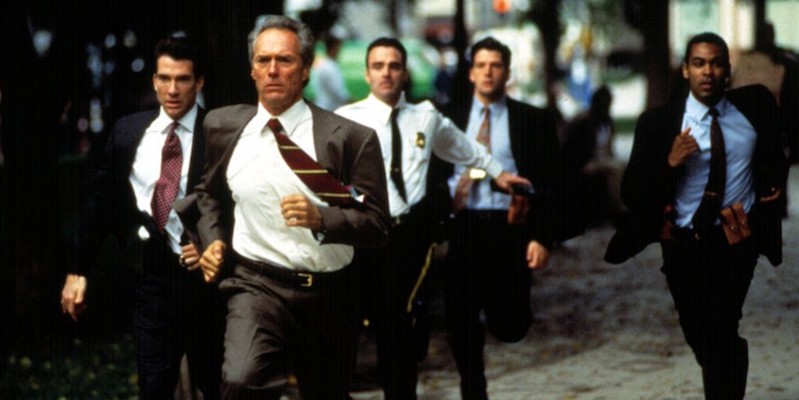 Counting Down the Greatest Crime Films of All-Time: #75

Decisions about the level of violence shown in the movie were not easy to make. In the United States, the scene in which Mitch Leary kills the bank clerk and her roommate by breaking their necks was shown. Although brief, it is quite explicit and very violent, with a single quick, hard twist clearly breaking each of the young women’s necks. This was deleted from the film for its release in the United Kingdom. Actor John Malkovich wanted to go a step further and kill their dog too, but director Wolfgang Petersen decided that that was simply too much.

In another chilling moment, as Clint Eastwood is hanging from the top of a building and Malkovich comes to the edge and offers to save his life, Eastwood pulls out his gun and holds it up to Malkovich’s face. In an unscripted and unrehearsed bit of ad libbing, Malkovich takes the barrel of the gun into his mouth. The director liked this improvisation so much it stayed in the final cut. 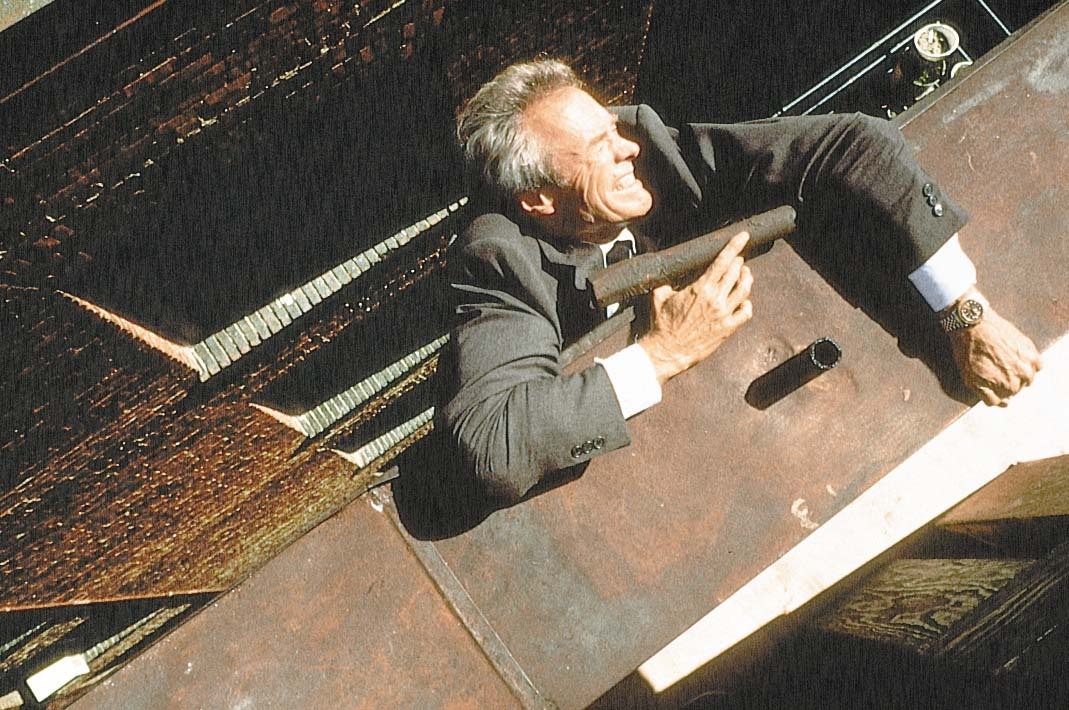 Secret Service agent Frank Horrigan, on the scene in 1963 in Dallas, failed to protect President Kennedy from an assassin’s bullet. He suddenly finds himself again in the position of protecting a president, even though he probably should have retired a long time ago. Still troubled by his perceived failure three decades earlier, Horrigan compensates by drinking excessively—and mostly alone, since his wife has left him.

Mitch Leary, a psychopathic former CIA operative, has decided to kill the President, not because of any philosophical or political position but mainly for the sport of it, “to punctuate the dreariness,” as he puts it. When he learns that Horrigan is to be his chief adversary in the cat-and-mouse game, he becomes excited, calling the agent repeatedly to give him hints and clues and to gloat about his successes and Horrigan’s failures. His taunts have an effect on Horrigan, who becomes more and more determined not to lose another president. The agent must also endure the arrogance of his much younger boss, who wants no part of Horrigan because he is not as by-the-book as he would prefer.

Also on assignment to protect the President is a young female agent, Lilly Raines, who has doubts about Horrigan, but soon learns to trust the politically incorrect dinosaur and falls in love with him. Horrigan’s persistent sleuthing and reasoned deductions lead him to the killer, just in time to throw himself in front of the president as Leary fires his homemade handgun. He survives because of a bulletproof vest, which Leary later chides him for wearing. In their final confrontation in an elevator high above Los Angeles, Leary hangs from the edge and Horrigan offers to save his life, as Leary has saved his earlier, but instead the egomaniacal assassin lets go, plunging to his doom.

Although there is nothing original about a film in which there are two highly intelligent and well-motivated adversaries—one a vicious, amoral killer and the other an over-the-hill, drunken law enforcement maverick—it has rarely been done so well. The tension remains high, and the two primary protagonists, with wildly divergent styles (the frenzied pathology of John Malkovich and the laconic confidence of Clint Eastwood), mesh perfectly.

Verisimilitude for the filmed campaign shot was achieved by using actual scenes from the 1992 presidential campaign of Bill Clinton.

In the scene where Horrigan’s partner is killed, Clint Eastwood actually did hang from the edge of the building, six stories above the ground, at the age of sixty-three, though he did wear a safety belt—just in case.

For such an expertly filmed and edited motion picture, there is one stunningly sloppy piece of filmmaking. When Horrigan breaks into Leary’s house, he is seen smashing the top half of a large window. When he enters, however, he crawls through the bottom half.

Another slipup occurs when the Secret Service is able to trace a call from Leary to Horrigan. They discover he is right across the street in Lafayette Park and race to catch him. There are, however, no pay telephones in Lafayette Park.

When agent Lilly Raines asks Frank Horrigan if he has met the resident and the first lady yet, he replies, “I normally prefer not to get to know the people I’m protecting.” “Oh yeah—why’s that?” Lilly asks. “Well, you never know,” Frank replies. “You might decide they’re not worth taking a bullet for.” 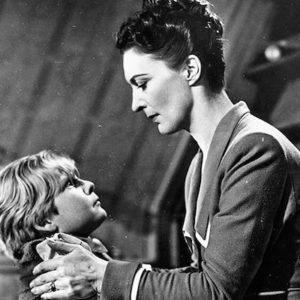