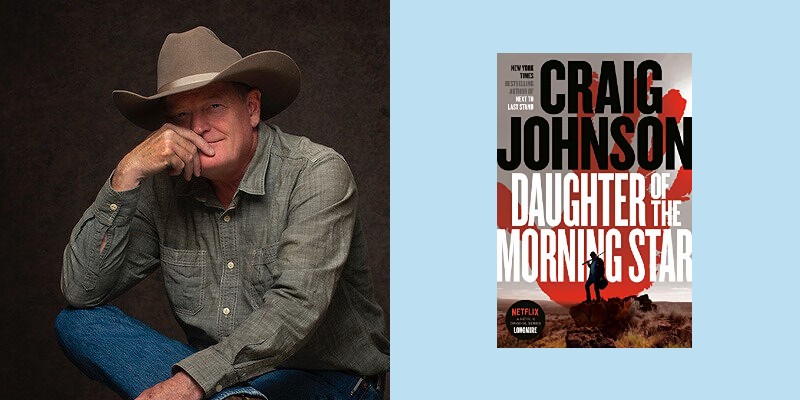 A missing person poster at a library on the Crow Reservation was the inspiration for the newest Longmire novel.

In the newest novel in Craig Johnson’s Longmire series, Sheriff Walt Longmire is called out to assist Tribal Police in an investigation. A local basketball phenom, Jaya One Moon Long, is receiving death threats. Her sister was one of the many Native women to go missing without a trace, and the fear is she will be the next. Daughter of the Morning Star is one of the most unsettling and deeply moving installments in the long-running series. In the lead-up to the novel’s release, Johnson answered a few questions about the people and events that inspired this story.

What inspired you to write Daughter of the Morning Star?

I was doing a library event up in Hardin on the Crow Reservation a few years back when I looked up and noticed a missing persons poster on the community bulletin board. It was a simple computer copy with the face of a young woman, bright-eyed and smiling and now . . . Gone. The words were desperate and pleading and a reward was posted. Her face was faded, and the paper wrinkled and yellowed with age—a fervent and unanswered prayer that fluttered against the bulletin board like a turning page every time the door of the library opened and closed. I can’t think of anything worse than losing a loved one—I mean having them turn up missing and then never knowing what happened to them. I’ve spoken with people to whom this has happened and the thing I have heard repeatedly is that the worst part is the not knowing—the lack of closure, having no idea if they are alive or dead or if they suffered or are still suffering.

What does the title refer to?

There was a great chief of the Cheyenne Tribe and although he was known as Dull Knife or Motšêške Ôhnêxahpo in Cheyenne, a translation of his Lakota name, to local settlers, U.S. military leaders, and other tribes, his Cheyenne name is translated as Morning Star. He is much revered as the chief of the Northern Cheyenne who led his people in an exodus from their confinement in Oklahoma back to their native lands of Montana. He’s so revered, in fact, that the college, the high school emblem, and the flag of the Cheyenne Nation is his personal symbol. I thought that since Jaya One Moon Long, the epicenter of the novel was playing for the Lady Morning Stars, that she would be the Daughter Of The Morning Star.

High school basketball star Jaya One Moon Long receives death threats because of her race. Within the pages of the novel startling statistics regarding Native American women and teens are mentioned: Native women are three-and-a-half times more likely to be raped or sexually assaulted than the national average, and Native women are six times more likely to be murdered. The suicide rate for Native teenagers is two-and-a-half times greater than the national average. According to the FBI’s National Crime Investigation Center, 5,590 indigenous women went missing last year alone. Why are these statistics so under reported and what can be done to help?

The plight of missing and murdered indigenous women is so great that I had to reassure my publisher that the statistics contained in this novel are accurate. The numbers are staggering, and they speak for themselves. More is being done, but there is so much more to do. Jurisdictional issues and a lack of communication between agencies make the investigative process difficult and underreporting, racial misclassification, and underwhelming media coverage minimize the incredible damage that is being done to the Native community as a whole. The good news is that with more exposure, there are a number of incredible task forces and community links which are providing a centralized database and applying pressure to assure that these women are not truly lost, organizations who are attempting to make a difference. The nearest to me is the National Indigenous Women’s Resource Center in Lame Deer, Montana. All their information is available on their website at NIWRC.org and if you can, please consider making a donation. There are far too many of those missing persons posters scattered across Indian Country, mothers, daughters, aunts, nieces, and wives who carry our hearts with them wherever they are in those turning pages—let’s bring them home.

Your books include Native American characters, locales, and traditions. Have you received feedback from Native American readers regarding the authenticity of your portrayal of their people and culture? What special research did you do for this book in particular?

In a time of cultural appropriation, I think you must be respectful of all customs and societies. I’ve been fortunate in that both the Cheyenne and Crow tribes have been extraordinarily welcoming to me and my books since the beginning. They’re my neighbors and remarkable people, and to not include them in my books would be a misrepresentation of the place I call home. The books and TV show Longmire are very popular up on the Rez, and the only criticism I get is generally the Cheyenne saying there wasn’t enough Cheyenne in the last book, or the Crow saying there wasn’t enough Crow.

This book provided several challenges in that basketball on the reservation is something akin to a religion, but it was a great excuse to head up and spend time with my friends in Lame Deer and Hardin—I don’t think I’ve ever seen so many young women’s basketball games.

Henry Standing Bear does not use contractions. Is this a conscious choice and how did it come about?

Generally, in a book, you only get to describe a character once, but that character is going to speak for the entirety of the novel, so a way to differentiate them is through their voice. I take pride in not using tag phrases such as “He said” or “She said” . . .  I think the voices should be so indicative that the reader should be able to tell who’s talking without me telling them.

Henry is a very precise individual in every aspect of his life, including his language. There was one time I was with my buddy Marcus Red Thunder (who is the actual model for Henry), and I noticed that every once in a while, he would fall into this B-movie, Indian-speak, so I asked him why he did it. His response was that he did it sometimes to just piss white people off . . . Well, that’s when it became a standard of the character.

You explore the supernatural in Daughter of the Morning Star. An apparition of the missing girl Jeanie One Moon makes a couple of appearances, and Walt has a mystical experience after falling into a canyon while looking for his canine companion, Dog. What inspired you to include mystical elements? Do you believe in supernatural phenomena?

Whenever I’m writing on that particular subject, I always think of the Shakespearian quote, “There are far more things in heaven and earth, Horatio, than are dreamt of in your philosophy.” My Native friends are always reminding me that we may think we know what is going on around us, but there might be more than we can see, and since my kind of people have only been in the territory for a few hundred years and theirs have been here for thousands, it might behoove us to listen. I try to write the books on a number of levels so that all kinds of folks can find something of interest, and I don’t think you can write about the Cheyenne and Crow and not include their spirituality and mysticism—it is too much of who they are.

Women’s high school basketball figures heavily into Daughter of the Morning Star. Are you a women’s basketball fan and when and how did you become interested?

I’d rather watch women do just about anything more than men, and I feel that women’s basketball is more of a team game with a stronger sense of poetry. I just look at their young, fearless faces, and it gives me hope for our species.

How do you think Walt Longmire would handle a year of quarantine? How did Craig Johnson cope?

Well, as a sheriff, Walt wouldn’t have the luxury of sequestering himself away on a ranch where the nearest town only has 25 people. He would’ve been on the front lines just like all those remarkable first responders and medical personnel who have been the unsung heroes of the pandemic. Me, I spend most of my time in a room alone, typing about my imaginary friends… I miss the book events and the one-on-ones with the readers, but I’m in hopes that will recommence soon enough. 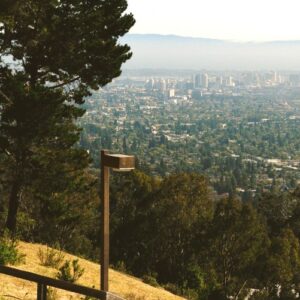 Recently while stopped at a red light I pointed out to my wife a man with long white hair, sitting on a recumbent bike, wearing...
© LitHub
Back to top