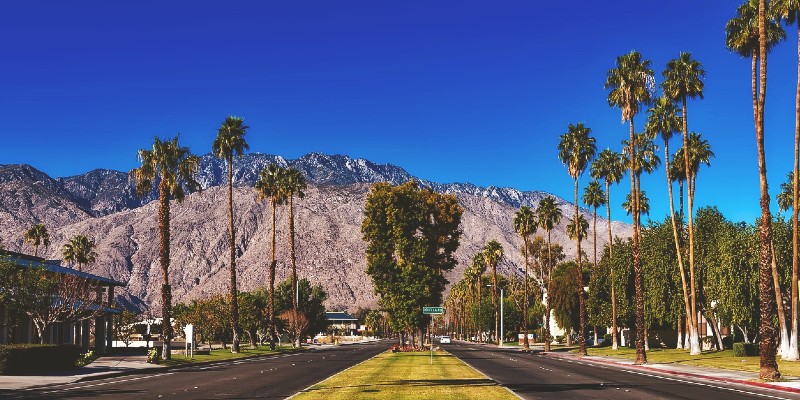 A long tradition of murder and mystery in the desert city known for architecture, design, and monied denizens.

This ‘Crime and the City’ comes to you with a free dose of seriously dry heat, the tinkling sound of sprinklers and the low hum of a thousand a/c units. Yes, we’re in Palm Springs, California. A resort for tuberculosis sufferers (including that most famous crime writing “lunger” Dashiell Hammett briefly), “Playground of the Stars” for Hollywood types, just 107 miles from LA.

Raymond Chandler decided to take Philip Marlowe out of the City of Angels to Palm Springs (and into a bad marriage) in his final unfinished novel Poodle Springs. It remained uncompleted at the time of his death in 1959. Poodle Springs was very much Chandler’s version of Palm Springs – “Poodle Springs, I call it,” Chandler wrote in 1958, “because every third elegant creature you see has at least one poodle.” In 1988 Knopf asked Robert B Parker to complete the novel after the legendary agent Ed Victor remarked that Parker was, “the closest living writer to Mr. Chandler.” The result is not the best of the Marlowe books – the PI is a little lethargic, his bride, the millionairess Linda Loring, a little out of central casting, it slightly reprises the pornography plotline from The Big Sleep, but it’s worth having on your Chandler shelf. And on your Palm Springs shelf too. The newlyweds move to Poodle Springs and rent a house – ‘It’s a bit on the chi-chi side,” admits Loring, “but so is Poodle Springs.’ Ouch!

Now if Chandler and Parker are to be believed (and because they are both crime writing gods, they should, emphatically, be trusted on this stuff) Poodle/Palm Springs is claustrophobic, full of sordid little secrets, routinely moneyed, constantly slightly tipsy, and generally sex obsessed. Still, none of these traits necessarily mean the place ain’t fun in a sort of blandly excessive, money-to-burn kinda way.

British author Leslie Charteris obviously agreed with Chandler. He’d brought his bestselling character Simon Templar, aka The Saint, to Palm Springs in a novella as early as 1942. The story is contained within the collection, The Saint Goes West, a trio of World War two themed tales set in the southwest US. In Palm Springs an alcoholic millionaire begins receiving death threats after he helps police track down (and kill) a gangster. He hires The Saint as a bodyguard, but suave Simon Templar finds himself distracted by the millionaire’s trio of live-in girlfriends. An early version of the story appeared as an RKO B-movie – The Saint in Palm Springs (1941) with British actor George Sanders, which has few merits apart from being filmed on location in the town.

In 1985 bestselling crime author and former LAPD cop Joseph Wambaugh took a trip to Palm Springs in The Secrets of Harry Bright in search of the “rich and famous” he often liked to write about. Palm Springs boosters didn’t like the novel much – booze, sex, drugs, and discriminatory golf clubs. A rich man’s son is found incinerated in a Rolls-Royce, a bullet in his head. LAPD homicide detective Sidney Blackpool arrives to investigate amid the desert, golf courses and social tensions.

A couple of excellent collections centred around Palm Springs: Akashic Noir’s Palm Springs Noir (2021), edited by Barbara DeMarco-Barrett, has it all – the pastel-coloured pool floaties, the gigantic Marilyn Monroe, the Mojave Desert, some lush, and louche, living, and a bunch of great contributors, mostly with Coachella Valley links. Several of whom have also appeared in previous Crime and the City columns, such as Tod Goldberg. And then there’s Palm Springs True Crime (2016) from Eric G Meeks featuring such colorful local characters and crimes as The Octopus, and Indian Head Nichols; Cliff Lambert and The Boiz; and The Trials and Tribulations of Ginny Foat.

A couple of other Palm Springs-set crime novels: Albert Simon’s five-book Henry Wright series starts in Palm Springs with For Sale in Palm Springs (2004), with retired police chief Wright living in Palm Springs and asked by his friend Wayne Johnson, a detective in the Palm Springs Police department to help solve a crime. Additionally, Martin Roy Hill’s Empty Places (2013) is set in an economically depressed Palm Springs in 1987. There’s still a rather dissolute set with their expensive cars and cheap drugs. war correspondent Peter Brandt returns from Central America to find his ex-wife brutally murdered and the local police unwilling to investigate her death. Suspects include anti-communists, drug smugglers, and corrupt politicians.

Of course, I don’t want to give the impression that Palm Springs is all just about sin, vice, and murder just beyond the reach of big, bad LA up the road. It’s a cozy town too. Just ask local real estate agent, Amanda Thorne, in David James’s very cozy Three Bedrooms, Two Baths, One Very Dead Corpse (2010). Seemingly luxury properties are not enough, so Amanda and her ex-spouse, Alex, team up in a new venture: solving murders. Local activist Doc Winters is found dead (unfortunately in a house Amanda is trying to sell) and maybe his wellness touting wife did it, or maybe it was his ‘elderly, oversexed, oversharing neighbor.’

Also in the cozy vein, and in the popular sub-genre of equine-related crime novels, is Lillian M Roberts’s Riding for a Fall (1996). Hired by old flame Ross McRoberts, Palm Springs vet Andi Pauling learns that her wealthy new client’s horses have been the targets of a saboteur, a situation that is complicated when a polo player is murdered.

And then there’s Dianne Harman’s High Desert Cozy Mystery Series, which runs to 19 books and has murders all over Palm Springs. Most crimes have links to food and, yes, recipes are included in the books, featuring Marty, a recently divorced antique, and art appraiser who moves from the Midwest to live with her sister in High Desert, California, just outside of Palm Springs.

And finally, something a little different, as usual. Norman Mailer pitched up in 1955 to write The Deer Park, which went by a few publishers (worried about its obscenities) before Putnam’s published it. The metaphorical “Deer Park” is Desert D’Or, California – a thinly veiled stand-in for Palm Springs full of the fashionable, the Hollywood elite and the generally morally depraved. Incidentally, the title refers to the Parc-aux-Cerfs (Deer Park), Louis XV’s personal harem. My old paperback copy includes the enticement on the jacket: “Desert D’Or – an incestuous hothouse of a town – a haven for manipulators, film stars, lovers, pimps, producers, whores, gamblers, scriptwriters and cheats.”

The Deer Park is not so much a crime novel in the conventional sense but more a description of an American equivalent of, say, the French Riviera, if you buy Somerset Maugham’s description of the French coast as a ‘sunny place for shady people’ (or more recently, using Laura Lippman’s definition of noir: where ‘dreamers become schemers’). And so welcome to Palm Springs. I mean Desert D’Or. Or is it Poodle Springs? Take your pick. 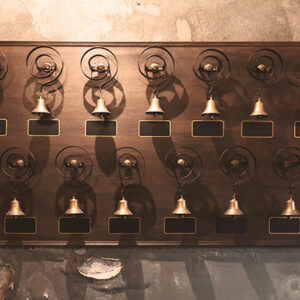 Sure, the killer butler is an obvious suspect, but why isn’t anyone looking at the maids? The easy answer: they were invisible....
© LitHub
Back to top