Brighton, long regarded as London’s sleazy West End on Sea and definitely a prime candidate for a Crime City. Just an hour or so by train from London to the Sussex coast, a town of burnt down piers and dirty weekend hotels. It’s home to early rising commuters and transient bed-sitters; hopeful gentrifiers and desperate homeless; relocated Londoners in need of fresh air and newly arrived immigrants looking for seasonal work; weekend ravers on Ecstasy and family day-trippers down from “The Smoke” for a sliver of sunshine and a stick of rock. Everyone knows that 1960s Bank Holiday weekends were when the Mods on their Lambrettas and Vespas followed the Rockers on their BSAs and Triumphs to Brighton—the Rockers drank the town dry while the Mods dropped Blackbombers and Purple Hearts in the Frothy Coffee shops (it took England some time to ask for a “cappuccino”). They then passed the time battling it out along the sea front sending sunbathing families scattering under a hail of wooden deckchairs and flying beer bottles. Go back a bit further and you might think of Brighton as a town of (probably fixed) horse races, illegal betting and razor gangs; a town run by the Italian Sabini gang who brought their organized crime outfit down from London to the seaside.

And that’s usually where Brighton as a crime city starts for readers—Graham Greene’s Brighton Rock, published in 1938 and described by the author himself as “an entertainment.” And it is . . . if your kind of entertainment is wildly slashing razor gangs and revenge killings. Brighton Rock isn’t quite a True Crime book, but it was inspired by real events as the local razor gangs battled for supremacy of the town’s betting trade. Greene’s gang boss Colleoni is a very thinly disguised portrait of Charles “Derby” Sabini, a Brighton resident since the 1920s, boss of the Sabini mob, and the notorious “King of the Racecourse Gangs.”

The image of the town Greene presented in Brighton Rock has never quite been shaken off, much to the chagrin of Brighton’s local politicians. The image persists—perpetuated first by Richard Attenborough’s unnerving performance as the young psycho Pinkie in the 1947 movie version of Brighton Rock (scripted by Greene with Terence Rattigan) and then again in Rowan Joffé’s 2010 remake with Sam Riley bringing new menace to the story, reprising Attenborough’s Pinkie, but relocating the story from the “Spiv” culture of the 1940s to the Mods of the 1960s.

Talking of Greene, there is a scene in the 1999 Neil Jordan movie version of Greene’s 1951 novel The End of the Affair (that isn’t in the book) of a man, in a Brighton hotel, surreptitiously staging an affair in order to obtain a divorce from his wife. Brighton was always a town where illicit lovers weekended; Britain’s stern marriage laws allowed a couple to divorce if the husband was “caught” with a female (not his wife) in a bedroom. All that was needed to secure the divorce was a witness (invariably a paid-off hotel maid). Brighton was the most popular destination for these staged liaisons. Greene’s seedy vision of Brighton has stuck fast in the British public imagination—no matter how many beach raves, Gay Pride festivals, vintage car rallies or other alternatives the local tourism promotion board offers visitors.

Greene’s vision of Brighton as a haven for the criminal and the marginal has continued to grip crime writers’ imaginations. Brighton-born Danny Miller’s 2011 Kiss Me Quick (which for non-Brits is a famous seaside slogan printed on cheap hats) is the first in his Vince Treadwell series. It’s set in 1964 Brighton amid the battling Mods and Rockers with plenty of the sort of Brighton Greene would have felt at home in—illicit porno flicks, Corsican pimps down from London, drugs, police corruption and a dead girl. Kiss Me Quick delves into the bars, nightclubs, dirty weekend hotels and gambling joints of the town’s legendary past. In later books Miller has Treadwell move on from Brighton—first to Swinging 1960s London in The Gilded Edge (2012) and then to the sexy, suntanned French Riviera (well, nobody ever went to Brighton to get a serious tan!) in Exit The Thief (2014).

Another local Brighton writer, Elly Griffith, has also been successfully mining the Brighton of Greeneland. The Zig Zag Girl (2014) brings together the unlikely pairing of Detective Inspector Edgar Stephens and slightly past-it seaside vaudeville magician Max Mephisto to solve a murder in 1950s Brighton. The pair team up again in Smoke and Mirrors (2015) when two kids go missing after a second-rate pantomime. They don’t get much of a breather before they have to confront an anarchist plot to bomb the pier in The Blood Card (2016) and then there’s a dead dancer from a nude tableau show (a form of entertainment that’s just so very 1950s Brighton!) in The Vanishing Box (2017). Each of the Stephens and Mephisto novels conjure (forgive the pun) the slightly down-at-heel post-war Brighton world of cheap end-of-the-pier entertainment shows, mouldering lodging houses that reek of the chip pan and smoky pubs serving warm beer.

But surely Brighton’s changed, I hear you cry? Gentrification, the Commuter Belt, the “Gay Capital of Britain”, student ravers? Well, reading the local crime fiction, yes and no; same but different would seem to be the best answer. The King of Brighton crime nowadays is undoubtedly Peter James. James has sold about as many books in his phenomenally popular Detective Superintendent Roy Grace series as there are pebbles on Brighton Beach and—as anyone who’s ever tried to stretch out in the sun and get comfortable on that beach will tell you—that’s a lot of pebbles. Every one of the 13 (certainly not an unlucky number for James—he’s sold 18 million copies and counting worldwide so far) Roy Grace novels has the word “dead” in the title giving you an idea of the content.

But though they’re murder mysteries the Roy Grace series is firmly set in the Brighton of now—drugs, undocumented immigrants, hit-and-run killings, gambling debts, philandering husbands. James himself was born in Brighton and was writing thrillers set here, there and everywhere. Then one day a former Chief Constable in the city’s police (just to confuse things Brighton was always a town until it was re-designated a city in 2001) told him that Brighton was the favored place to live in the UK for “First Division Criminals.” That opened a whole world of possibilities and Roy Grace confronts most of them.

With Roy Grace being such a big seller, and James’s new novels regularly entering the book charts at number one on the strength of pre-sales alone, it’s amazing he hasn’t appeared on our TV screens so far. And yet it hasn’t happened, despite rumors of everyone from Steve Coogan (who played it straight in 2013’s Philomena, but is best known in the UK as a comedy actor) to Hugh Bonneville (the stiff upper lipped Lord Grantham in Downton Abbey) being cast as the forty-something DS with Brighton Police. Grace fans await further news with baited breath. Though one thing everyone agrees on is that the show absolutely must be filmed in Brighton.

A couple of other Brighton crime novels (and a TV show) worth noting . . .

The Death of Bunny Munro (2009) by Nick Cave. Australian Cave (of Nick Cave and the Bad Seeds) is a long time resident of Brighton. His Bunny Munro is a womanizing, alcoholic, failed salesman in early 2000s Brighton where a serial killer is on the loose (fiction) and the Victorian West Pier has just been destroyed in an awful fire (sadly, not fiction). It’s a stylish, indie-film of a novel and includes an extended road trip through the city to many of Cave’s favorite places. [Ed. note: Nick Cave + crime fiction = sold]

Dirty Weekend (1999) by Helen Zahavi. Plenty of Brighton tropes in this controversial novel that divided the critics when it was published. Bella, a sex worker, goes on a killing spree targeting men who abuse women—man after man; murder after murder. No lesser commentator than Salman Rushdie hated it; no lesser feminist critic than Naomi Wolf loved it. Either way it was a best seller. Unfortunately just about everybody disliked the movie adaptation a couple of years later, directed by Michael Winner. Several reviews described it as “sleazy”—Brighton’s reputation clings on doggedly.

The Fear (2012), Channel 4. Written by Richard Cottan (who also wrote the UK TV version of Wallander with Kenneth Brannagh) The Fear was filmed entirely on location in Brighton and stars the always terrifying Peter Mullan as local crime boss Richie Beckett who’s got three major problems—firstly, the Kosovan mafia have arrived and want to take his empire away from him; secondly, his sons are big on violence, but decidedly smaller on smarts and; thirdly, Richie’s mind is disintegrating in the early stages of an aggressive dementia. Mullan is amazing as the city’s gang boss and, of course, the narrow Brighton “Lanes” and seafront are suitably sleazy and filled with strip clubs, kebab shops, dark pubs and prowling minicabs. The trick in a gangster show of course is to humanize the monster (Tony Soprano as much as Jimmy Cagney) and Mullan, despite his trademark thick smog of menace and volatility, is also surprisingly vulnerable as the horrible disease takes control of him.

There’s a direct line from Brighton Rock to The Fear—a line that encompasses just about all crime writing associated with the city. Sleaze, transience, edginess runs through the place, so the saying goes, like “Brighton through rock.” One last recommendation—a novel that truly captures the down-at-heel world of 1930s London and Brighton—Patrick Hamilton’s Hangover Square (1941). I know it’s not always thought of as a crime novel, or a specifically Brighton novel, but there are elements of both. No spoilers, but, if you haven’t read the story of Netta and George Harvey Bone then I suggest you do. I guarantee you won’t forget it; it’ll stick with you afterwards—like too much cheap lager and a portion of greasy fish and chips on a dirty weekend to Brighton, right before you realize the local bastards picked your pocket, nabbed your wallet, and stole your car keys. 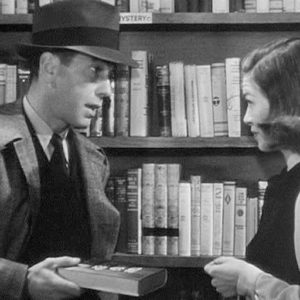 There is, at the start of the trailer for the 1946 film version of The Big Sleep, a surreal vignette in which Humphrey Bogart,...
© LitHub
Back to top