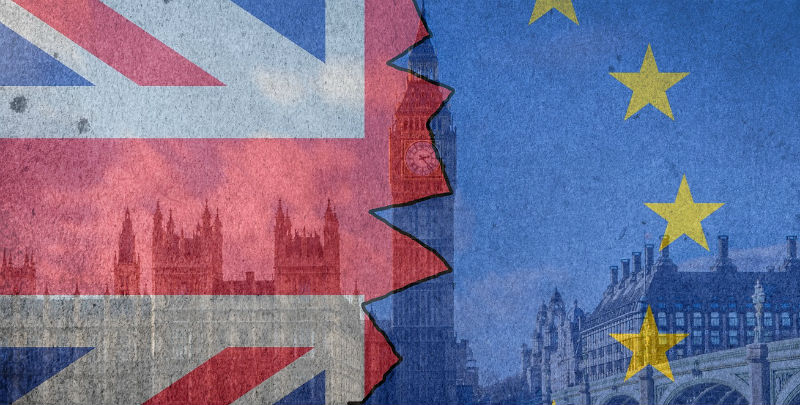 Crime fiction is capturing the bitter comedy of Brexit. Here are five novels of politics on the edge.

It’s 2019. We’re trembling on the edge of disaster and suddenly we’re giggling with terror, wondering what the hell will happen if we go over. Writers about the present have a hard task on their hands—in the UK, as in the USA, Turkey, and all over the world, we’re living in societies that are split right down the middle by choices we never really wanted to make. Respect for our political masters is at a record low. On the other hand, by using our freedom of speech to tell the story of our times, we novelists might represent an argument that democracy, despite what Mr Putin says, remains the least worst option.

Whenever reality gets odder than usual, fiction, with its vocabulary of extremes and waking dreams, may be the best way of recording it. Since the referendum in 2016 when we were required to vote ‘Yes’ or ‘No,’ quiet Brits have grown louder and angrier in a way that’s surely not us, or at least, not the us we thought we were. TV shows are full of people throwing insults at each other; interviewers are so deafly opinionated that we rarely find out what their interviewees are trying to say.

I tried to catch this mad, anarchic, adversarial Brexit spirit by writing Blood, a black comedy in which real horror and danger are disrupted by sheer absurdity and, as the Sunday Times said, ‘laugh-out-loud’ passages. In Blood‘s 2019 Britain, no-one, including the police, hears those who suffer. My heroine Monica Ludd, however, is a maverick. A six-foot, 260-lb senior teacher, she loves her pupils, especially those who, like her, have had a neglected childhood. As a powerful, fearless, supersized and outspoken woman, her very existence is a challenge not just to her mealy-mouthed head teacher Neil but also to her own murderous father, Albert Ludd, and metaphorically, the real world’s inflated male leaders—Putin, Trump, Erdogan, Kim Jong Un, Xi Jin Ping.

The most prosaic challenge for those writing about the present and future on the brink of a huge chasm of uncertainty like Brexit or Remain is ‘Which way will it go?’ In Blood, I (by a fluke) managed to predict 2019’s ‘endless stalling on dull committees.’ All the writers on the list below solved the will we/won’t we problem in different ways: all are well worth a read. 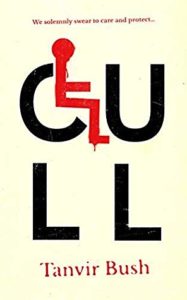 This novel, featuring the thoughts, feelings and amazingly rich smelly world of a wonderful guide-dog character called Chris, fizzes with satiric energy and wit as it attacks the ‘divide and rule’ mentality of the politicians leading the drive to Brexit. In the world of Cull, a version of the far right, xenophobic UK Independence Party has come to power and a virtual war on ill, elderly or disabled welfare claimants is beginning. Feisty blind journalist Alex and her lovable canine sidekick Chris lead the fight-back in a Britain where the long-term homeless or alcoholic have started to disappear under mysterious circumstances. Very funny, sometimes shocking and featuring a memorable cast of corrupt senior doctors and venal politicians, this book reminded me of Anthony Burgess’s timeless Clockwork Orange or the fantastical but razor-sharp cinematic satire of Lindsay Anderson, writer and director of If. 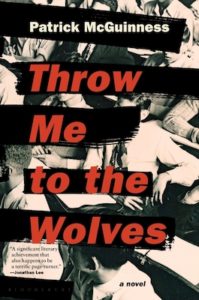 Throw Me to the Wolves, by Patrick McGuinness (Bloomsbury)

Patrick McGuinness has set his darkly funny political thriller just after Brexit to avoid committing himself to the details of how it might happen, instead telling a story that critiques the aggressive populism and demonising of ‘the other’ that has led up to it. When a pretty young woman disappears, suspicions fall on one of her neighbours, ‘Mr Wolphram’, an eccentric old former private school teacher whose ‘crimes’ include his class, his age, his penchant for classical languages and love of art and fine wines. The anti-intellectual popular press howl for Mr Wolphram’s blood, and even the total absence of incriminating material on his computer paradoxically becomes an argument for his likely guilt. At first, two shabby detectives, Ander and Gary, keep up a stream of gags as they fail to protect the innocent or catch the guilty. Then Ander starts to reflect on a similar case of ‘bullying the oddball’ from his own schooldays, and steps up to the plate… 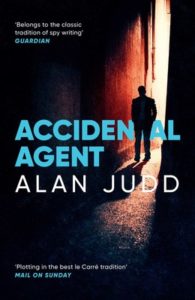 ‘Alan Judd’ is the pseudonym of an author with a military, Foreign Office and, one gathers, secret intelligence background. His comedy of errors reveals how truth can leak away through the cracks between Parliament and the secret state as an ambitious and unscrupulous senior spook starts trying to influence Brexit  negotiations. The fictional head of MI6, Charles Thoroughgood, is a thoughtful, fair-minded older man with enough self-awareness to worry about the resemblances between him and Gareth Horley, the corrupt agent who he must hunt down. Charles is shown as reliable and judicious. His fine-grained moral sympathies can distinguish between devout Muslims who want to do charitable work in Syria and fanatical Islamists who support ISIS.’  There’s a brief caricature of an intelligent but scruffy, tousled Foreign Secretary who, despite the intelligence with which Judd credits him, is surely a version of hapless former Foreign Secretary and likely future UK prime minister Boris Johnson. In Judd’s view, the likelihood of a Brexit deal is all about the level of the exit bill Britain has to pay; Britain and the EU are both bluffing about their respective top and bottom numbers. The novel may offer an over-reassuring picture of both Boris Johnson and the basic decency of UK’s spies, but it’s never less than fast, gripping and exciting reading. 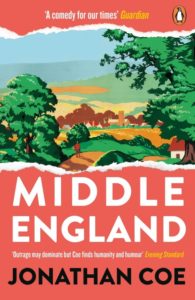 If future readers want to follow in detail and at length the ins and outs of the actual events and opinion shifts that led to Britain leaving the European Union, this mostly upbeat 419-page chronicle may be the book to read. Where the other novels on this list approach things via metaphor and obliquely, Coe, well-known for his previous satires, has made a solid, full frontal assault on the Brexit story, following his pro- and anti-Brexit cast of characters (many of them familiar from his previous novels)  from 2010, through the runup to the 2016 referendum and on to March 29 2019, the ‘official’ Brexit date, when he has anticipated the birth of a ‘beautiful Brexit baby’. As we know now, real life has let this prediction down, and Coe’s careful chronological approach leads to a certain slowness. But in an age where so many well-known British novelists have fled into writing historical fiction, Coe’s comprehensive comedy of machinations in the two main British political parties and generational tussles over Europe in the English countryside deserves respect. 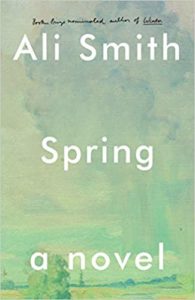 Ali Smith is a novelist much influenced by the radical American prose-poet of 100 years earlier, Gertrude Stein. Smith is that rare thing in these post-literary times, an experimental writer—and experiments can go right or wrong. Spring is the third in a seasonal quartet of novels all published over the last three years, following Autumn and Winter, with Summer still to come. Among the many habits Smith shares with Stein are her avoidance of orthodox grammar when she feels like it and her radically disruptive approach to individuals, the ‘characters’ novels usually live or die by. At the beginning they are blended into a choric mass who speak for their society; more often individuals are metaphors (like Florence, the brilliant 12-year-old telling the oldies how it is, who represents a figure like climate activist Greta Thunberg) or spokespeople for opinions. At her best, Smith makes her characters speak powerfully from the heart for us all. Here Brittany, unhappily conscripted to work at a refugee camp where the ‘deets’ are indefinitely detained, refuses the polarizing questions of a BBC journalist. ‘No, see, I’m not going to tell you how I voted… Doesn’t matter what…anyone voted. Because what’s the point, if nobody in the end is going to listen to or care about what other people think unless they think and believe the same thing as them…You don’t care what we think. You just want a fight.’

Click here to read an essay by Maggie Gee on why Virginia Woolf’s depression shouldn’t define her.

Maggie Gee is a British novelist known for her sardonic works and engagement with social and political works. Maggie Gee’s fifteenth novel, Blood, is published in the UK and US by Fentum Press. 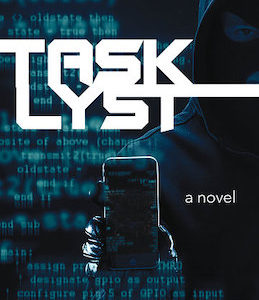 The suspense ended for Elliott Tuesday night when a Task Lyst alert sounded on his smartphone. He clicked on the notification...
© LitHub
Back to top