Crime, History, and the Texas Panhandle

5 Visions of the Texas Flatlands and Mesas

If it’s true, as the late V.S. Naipaul once wrote, that “there is no landscape like the landscape of your childhood,” and it’s also true, as Larry McMurtry wrote, that “the South, fortunately for its writers, has always been dark and bloody ground, but Texas is only scenery,” where did that leave me, a child of remote West Texas, the most existentially un-scenic part of the state, trying to write a novel about a thief picking his way across those flatlands in an existential fugue?

For one thing, I knew McMurtry didn’t really mean it, or if he did it was during one of his ornerier periods, in 1968, in his acidly elegant collection of essays about his home state, In A Narrow Grave. (“Pussyfooting is a vice I have been concerned to avoid,” he announces in that book, as if anyone would ever accuse him.) For another thing, I knew enough about the lore of desolate, sparsely populated lands like my own to understand that they are often, in their silences and seeming banality, places where a sense of unease—the feeling that something over the horizon might be gaining on you—roots itself even more ominously than it does in urban alleys and kudzu-covered river bottoms. The sunlight leaves you undefended. Starkweather and Fugate or Hickock and Smith or Bonnie and Clyde might be in the car approaching yours down the road with the headlights off, the only other car as far as the eye can see.

In my novel, Presidio, the thief, Troy Falconer, is barely a professional and comically far from hardened. He’s never used a weapon. He’s never hurt any of his victims, other than financially and maybe emotionally, upending their sense of personal security. He steals cars and, after a nervous breakdown, comes primarily to work motels, where he stays until he sights a fellow lodger about his height and weight. When the man steps out for a meal or a swim, Troy cleans him out, drives away in his car, then repeats the process again and again down the road whenever the things he’s stolen start to feel too familiar, too much like his own.

In writing the book, I returned to the Texas panhandle countless times from my home in Brooklyn but only once with a rental car and a notebook. Otherwise, the reconnoiter was accomplished entirely in the pages of histories, essays, memoirs, geographical texts, topographical maps, department-store catalogs, small-town telephone books, church registers, school annuals, fuzzy newspaper microfiche and anything else I could find to supply me with a deeper sense of the past and what Eudora Welty beautifully called “the grain of the present.”

Here are five of the books I turned to, the last of which is quite obscure but carries a true-blood affiliation. 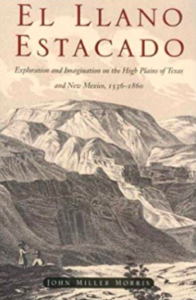 This marvelous 1997 history of the vast mesa lands of the Texas panhandle—the place Spaniards called the llano estacado, the staked or palisaded plains, one of the largest tablelands in North America, twice the size of Switzerland—demonstrates just how unfair the world of letters can be. The book was not uncelebrated; it won several Texas and historical association awards. But it deserves much wider recognition, not only because of the rigor of Morris’s research and the assured quality of his prose, but also because it is the only thorough history of a place that carries an outsize cargo of myth in the formation of the Old West and the American frontier. The llano was the Comancheria, the hunting territory of the Comanche tribes, who had displaced the Apache there in the 18th century and who were themselves driven out by force and starvation after the great bison slaughter sanctioned by the U.S. military. The land was the crucible where the cattle drive and the idea of the cowboy were born. It’s the place where John Ford set The Searchers (though Ford shot in Monument Valley because he needed a backdrop more cinematic than a flat-line horizon.) Morris’s book captures the terrifying majesty of a rare kind of landscape, so featureless that members of Coronado’s expedition, probably the first Europeans to pass through, in the 16th century, were barely able to navigate it. Even the index conveys the depth of the uncanny—there are no fewer than 15 citations listed under “Llano Estacado: disorientation on.” 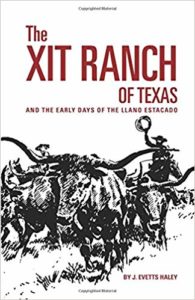 The XIT Ranch and the Early Days of the Llano Estacado, by J. Evetts Haley

Haley (1901-1995) was among the deities of Texas letters, a historian who took on heavy-duty subjects like the cattle king Charles Goodnight and, less memorably, Lyndon Johnson, whose presidency he loathed with an arch-conservative conspiratorial fervor. His first book, in 1929, was an epic chronicle of the ranch that once occupied almost the entire Texas Panhandle, at its height reputed to be the largest ranch under fence in the world. The story behind the formation of this longhorn ranch, the most fabled in Texas lore, is better than fiction: the land was sold to finance the construction of the Texas capital in Austin, whose granite dome still stands gracefully today, and among the investors in the ranch itself were the Earl of Aberdeen and the flamboyant English explorer and bon-vivant Henry Seton-Karr, who went down with the Empress of India in 1914 while returning to England from a hunting trip. 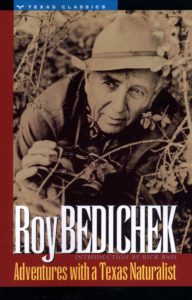 Adventures of a Texas Naturalist, by Roy Bedichek

Bedichek was another literary god in the Texas pantheon, not much remembered today outside the state, but his writing is so erudite and wise, and his connection to the land he loved so profound, he deserves a permanent place among the great American naturalist bards like Rachel Carson, Wallace Stegner, Edward Abbey and Aldo Leopold. McMurtry wrote of him: “He was an old-style philosophic humanist whose formal affinities are with Emerson, Thoreau, and, very distantly, Montaigne.” His writing about his time spent in the Davis Mountains, in far West Texas, is particularly good, especially when he casts his eye to the pre-historic, rhapsodizing the ancient petroglyphs in the rocks and urging just the right time to see them: “With sufficient leisure and toward sunset, when the sheer vastness of the landscape seems designed as mete and measure for eternity itself.” 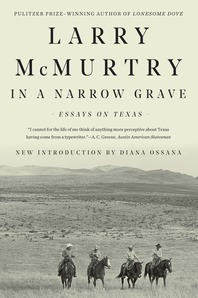 In a Narrow Grave: Essays on Texas, by Larry McMurtry

McMurtry is a fine essayist, and my favorite of his collections is Walter Benjamin at the Dairy Queen: Reflections on Sixty and Beyond, published in 2001, a kind of summing up of long-gestated feelings about many things, chief among them Texas. But this early gathering, full of vim and venom, meant a lot to me when my own love-hate relationship with Texas often tipped over onto the hate side of the scale. The book includes a hilariously scathing piece about rural sexual mores, “Eros in Archer County,” that takes into casual account both anal-genital confusion and bestiality. But the best essay, for my money, is one that follows McMurtry on a slow, solo drive up the mighty length of the state, from Brownsville in the south to Texline at the northwestern corner. When he finally comes over a rise and sees the lights of his hometown in West Texas, he writes, with brutal clarity: “Through my college years, topping that ridge had always given me a great sense of being home, but time had diminished the emotion and I had begun to suspect that home was less a place than an empty page.” 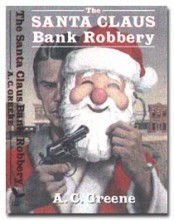 I include this odd little local history, published in 1999, partly because it capably relates the tale of one of the more outlandish and violent crimes in early 20th century Texas, when four men—one of whom inexplicably decided to disguise himself in a Santa suit—held up the First National Bank of Cisco, Texas, on the eastern edge of West Texas, on Christmas Eve day in 1927. The job went quickly awry and led to the largest manhunt in the state’s history at that time, as well as to six corpses. But the main reason I include the book is because one of the robbery’s henchmen, Henry Helms, a wayward pastor’s son who was executed in the electric chair for his involvement in the crime, was my first cousin, three times removed, on my grandfather’s side. It’s the closest connection I can claim to any real criminality, but I think it does a pretty good job.

Randy Kennedy is the author of Presidio. Kennedy was born in San Antonio, Texas, and raised in Plains, a small farming town in the Texas Panhandle, where his father worked as a telephone lineman and his mother as a teachers’ aide. He was educated at the University of Texas at Austin. He moved to New York City in 1991 and worked for twenty-five years as a staff member and writer for The New York Times, first as a city reporter and for many years covering the art world. A collection of his city columns, Subwayland: Adventures in the World Beneath New York, was published in 2004. He is currently director of special projects for the international art gallery Hauser & Wirth. He lives in Brooklyn with his wife, Janet Krone Kennedy, a clinical psychologist, and their two children. 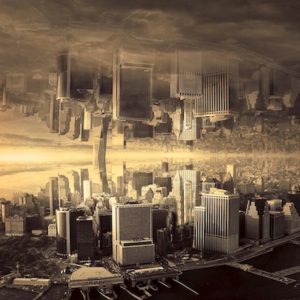 Urban fantasy and crime go together like steak and potatoes. Each element compliments the other because urban fantasy has a great...
© LitHub
Back to top