7 Books That Show Why Fiction is the Traveler's Best Companion

It was only after returning from Santa Fe for the first time thirty years ago that I started reading Tony Hillerman, devouring a half-dozen mysteries in the space of a month as a way to sustain my journey after the fact from my armchair. I began to wonder, though, what my trip would have been like had I read his novels before traveling, perhaps instead of the guidebooks I did page through. What if in their collaboration, Joe Leaphorn and Jim Chee had first prepared me for the complex cultural legacies I would encounter in New Mexico? A travel guide may appear at first glance to present neutrally assembled information, but in its very curation and emphases, it might offer as biased a survey of a place as any novelist with his particular worldview. With a travel guide, a reader can speculate about what it will be like once he or she arrives in a new country, but in moving through a novel, that same reader gets to inhabit and traverse the same map through a character’s point-of-view. Because crime fiction tends to depict social history with vivid plot, the reader not only gets to wander all of the famous parks and boulevards as any tourist would, but also goes beneath bridges and down dim passageways, deep into the shadows, taking in the city from another, often troubling perspective.

Reading crime fiction in place of (or often alongside) travel guides became my preferred mode of preparation for my trips, especially voyages abroad. Here are seven titles I’d recommend for seven cities—although a warning: adopting this approach might mean you get to know your shoulder better than you ever expected from looking over it so much. 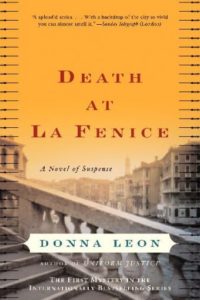 The murder of a celebrated (and reviled) maestro launches Donna Leon’s always engaging Guido Brunetti series, each mystery of which is set in and around Venice. So many writers have been drawn to La Serenissima for its old stones and canals, for its game of shadows and impossible reflections, but really it should be known as the Capital of Paranoia. What I love about Leon’s novel is the way her commissario navigates trickery and deception amid a maze of streets where it’s nearly impossible not to lose your bearings. I traveled to Venice for the first time in 2000 and stayed at a hotel a few blocks from the famous phoenix of an opera house—in fact, when I was there, La Fenice had been gutted by fire (for the third time) and was midway through a restoration, which only deepened the intrigue embedded in Leon’s writing. 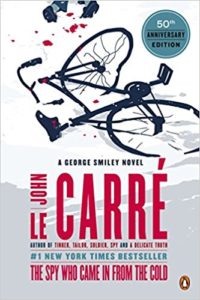 I read The Spy Who Came in from the Cold when I was a teenager after I came across the mass market paperback at a library sale. I judged the book by its cover—a winter photo of the Brandenberg Gate seen though barbed wire—and was drawn to its chill: I read the thriller in a day. It was originally published in 1964, but didn’t seem terribly dated during the Reagan years, and oddly it didn’t seem so dated in 2004 when I reread it before traveling to Berlin. By then the Berlin Wall was physically gone, yet psychologically ever-present. Even as it changes dramatically, I think Berlin will long be a place marked more than others by its dark history; as one moves around it freely now, one encounters memorials everywhere, both tangible—the names of murdered families stenciled on the sides of apartment buildings, the plaques noting where banal basements became torture sites—and invisible, which is to say in one’s memory, or perhaps one’s readerly imagination. As far as suspense writing goes, this makes The Spy Who Came in from the Cold a valuable and chilling introduction to the city. 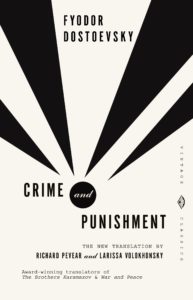 Crime and Punishment by Fyodor Dostoevsky

Like many adolescent existentialists, I first read Crime and Punishment in high school and identified with Raskolnikov’s feverish oscillations, if not exactly his attempt to pull off the perfect murder. I reread the book ahead of a trip to St. Petersburg, another paranoia-inducing canal city where you can catch the elongated reflections of strangers before you turn the corner and actually see them. It seemed entirely possible that the egomaniacal Svidrigailov was listening to me on the other side of the Hotel Astoria wall or that the detective Porfiry would stop me to look at my passport: Was I the elusive witness who could make his case? I don’t know that Doestoevsky set out to write a thriller from the murderer’s point-of-view, or that in Porfiry he meant to draft the indefatigable police inspector, or for that matter that with Sonya he intended to set up what later we would call the femme fatale, but I think he did. It’s the perfect crime novel to take with you on the long flight to Russia. 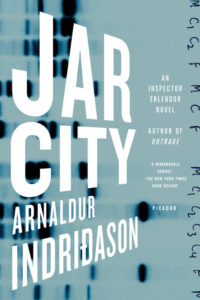 Really any Detective Erlendur mystery will provide you with as good a view of Reykjavik as climbing the modest spire of Hallgrímskirkja, but my favorite novel in Arnaldur Indridason’s franchise is Jar City. The murder of an older man in the present day sends Erlendur to the Genetic Research Center, and therein we readers can coil back through decades of recent Icelandic history. I especially love novels that can exist in multiple temporal planes and animate the past, and while most travel guide writers want to glorify the country’s extremes of geothermal heat and glacial frigidity, Indridason reminds us that this beautiful country is also populated by human beings engaging in very human dramas, at times misguided and tragic, at times tilted toward justice. 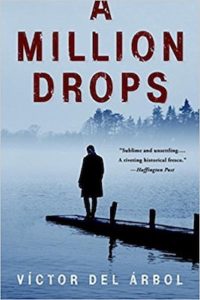 Ahead of a recent first trip to Spain, I did look at some guidebooks which I will admit helped me sort through the Spanish wars of succession, but Victor del Árbol’s Catalan thriller made my time in Barcelona all the more fascinating. In A Million Drops, it’s the suspicious suicide of a lawyer named Gonzalo Gil’s police officer sister and her connection to a murdered Russian gangster that unlocks a story of two families, and therein the interconnected history of fascism and communism in Europe. Gil becomes that classic figure in crime fiction, the amateur concerned citizen who becomes a semi-professionalized detective in order to defend those he loves. Del Árbol gave me new insights into the Spanish Civil War and its aftermath by also following Gil’s father, whose idealism in the USSR is corrupted by atrocity, turning him into a vexing anti-hero back in Spain during the anti-fascist resistance. A Million Drops stayed with me as my boyfriend and I wandered the narrow stone streets of the Gothic Quarter in the summer rain and, later in Madrid, as we took in Picasso’s still horrifying Guernica. 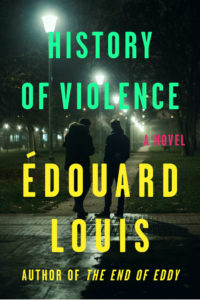 History of Violence by Édouard Louis

I’m cheating now because I first traveled to Paris when I was fifteen and then again for a summer during college, during which time I read both Hemingway’s The Sun Also Rises and Baldwin’s Giovanni’s Room, which given (spoiler alert) its murder plot point might be classified as some sort of crime fiction. But were I to recommend one book for a first-time traveller to Paris now, I’d suggest Édouard Louis’ History of Violence, the follow-up to his debut The End of Eddy. History of Violence takes us into the streets of Paris on Christmas Eve, when the narrator is heading home from his friends’ house late at night, eager to read the books they’ve given him. However, he’s followed by a fellow young man who eventually seduces the narrator and convinces him to invite him up to his flat; after they hook up, the stranger proceeds to assault and nearly murder the narrator. I’m not giving away too much because what is so brilliant about the novel is the nonlinear way the plot unfolds. The narrator simultaneously gives his account of that terrifying night, recalls overhearing his sister tell her husband about the assault (noting her misinterpretations), and walks us through the police investigation—the police are especially interested in the assailant’s immigrant status. We pretty much know what happens at the outset, but as we keep circling back over the night in question, we go in deeper and deeper, and understand more and more of the psychological and physical violence enacted. As in his first novel, Louis is interested in class, in the way the similar background of the criminal and the victim should bring them closer, but in the end ruinously casts them apart. Louis’ History of Violence takes apart the traditional crime novel and reassembles it in order to register the zeitgeist. 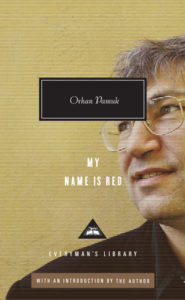 My Name Is Red by Orhan Pamuk

My favorite book about Istanbul, and the novel that turned out to be the better than any travel guide, is My Name Is Red, which begins puckishly: “I am nothing but a corpse now, a body at the bottom of a well.” The novel is set in the late sixteenth century and is communally narrated by a full cast of Ottoman characters and figures (including Satan and the color red), but it notably begins Sunset Boulevard-style with a murdered miniaturist, setting in motion a great mystery (along with a love story and a treatise on art and religion). The reader (metafictionally alongside the author) becomes the detective working through a labyrinthine whodunit. Elsewhere, in Istanbul: Memories and the City, Orhan Pamuk describes a Turkish phenomenon called hüzün for which there is no easy translation; it is a kind of collective melancholy for an imperial past that will never be re-achieved. Guidebooks will send you to all of the important mosques and palaces and commercial streets, but they won’t make you sensitive to hüzün the way My Name Is Red will: The city famously straddles the West and the East, and the way the Islamic miniaturists flirt with the forbidden figurative while trading in the abstract captures that conflict. That this conflict might lead to murder somehow seems eerily urgent in present-day Turkey.

Peter Gadol's seven novels include The Stranger Game, Silver Lake, Light at Dusk, and The Long Rain. His work his been translated for foreign editions and appeared in literary journals, including StoryQuarterly, the Los Angeles Review of Books Quarterly Journal, and Tin House. Gadol lives in Los Angeles, where he is Chair and Professor of the MFA Writing program at Otis College of Art and Design.

When American Jails Were a
Mom-and-Pop Business 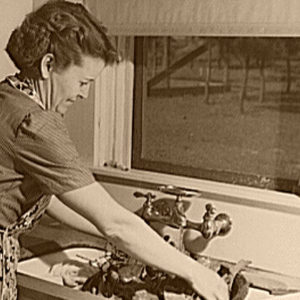 When American Jails Were a
Mom-and-Pop Business

Truman Capote’s In Cold Blood is a crime story of Homeric proportions that explores the violent murder of the Clutter family...
© LitHub
Back to top