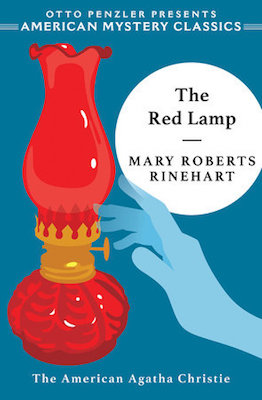 Mary Roberts Rinehart’s The Red Lamp, excerpted below, is the first in the American Mystery Classics series, launching today, and dedicated to reissuing the best American mysteries of the genre’s Golden Age in hardcover and paperback. Accompanied by new introductions from Otto Penzler, the first six titles are now available: an all-star roster that includes Ellery Queen, Dorothy B. Hughes, Stuart Palmer, Craig Rice, Clayton Rawson, and Mary Roberts Rinehart. In the following excerpt from The Red Lamp, a skeptical professor inherits an estate rumored to be haunted. Though initially dismissive of the claims, the man is forced to question his convictions when the property is visited by an apparition.

More sheep were killed last night. The Livingstones have lost a dozen of their blooded stock, and several farmers have suffered.

In each case the method is the same; the sheep are neatly stabbed in the jugular vein and then as neatly laid out in a row.

We are buying no mutton from the local butcher!

I assured Thomas this morning that I had not lighted the red lamp again, but he did not smile. He is quite capable of believing, I dare say, that I have summoned a demon I cannot control.

But he tells me that a county detective from town, sent by the sheriff, is coming out to look into the matter. And there is a certain relief in this. It seems to me that we have to do with some form of religious mania, symbolistic in its manifestation. The sheep is the ancient sacrifice of many faiths.

This belief is strengthened by Thomas’s statement that in each case save the first one there has been left on a near-by rock or, in one instance, on a fence, a small cabalistic design roughly drawn in chalk.

8:00 p.m. I feel like a man who has dreamed of some horrible or grotesque figure, and wakes to find it perched on his bedpost.

I feel like a man who has dreamed of some horrible or grotesque figure, and wakes to find it perched on his bedpost.

The detective sent by Benchley, the sheriff, has just been here, a man named Greenough, a heavy-set individual with a pleasant enough manner and a damnable smile, behind which he conceals a considerable amount of shrewdness.

He had, of course, gathered together the local superstitions, and he was inclined to be facetious concerning my ownership of the red lamp. But he was serious enough about the business that had brought him.

“It’s probably psychopathic,” he said, “and the psychopath is a poor individual to let loose in any community, especially when he’s got a knife.”

My own suggestion of religious mania seemed to interest him.

“It’s possible,” he said. “It’s a queer time in the world, Mr. Porter. People seem ready to do anything, think anything, to escape reality. And from that to delusional insanity isn’t very far.”

I suppose I looked surprised at that, for he smiled.

“I read a good bit,” he said, “and my kind of work is about nine-tenths psychology, anyhow. You’ve got to know what your criminal was thinking, and then try to think like him. The third degree is nothing but applied psychology.” He smiled again. “But that’s a long way from sheep-killing. Now I’ll ask you something. Did you ever hear of a circle, with a triangle inside it?”

I suppose I started, and I had a quick impression that his eyes were on me, shrewdly speculative behind his glasses. But the next moment he had reached into his pocket and drawn out a pencil and an envelope. “Like this,” he said and, drawing the infernal symbol slowly and painstakingly, held it out to me.

To save my life I could not keep my hand steady; the envelope visibly quivered, and I saw his eyes on it.

“What do you mean, hear of it?” I asked. And then it came to me suddenly that that ridiculous statement of mine had somehow got to the fellow’s ears, and that he was quietly hoaxing me. “Good Lord!” I said, and groaned. “So you’ve happened on that, too!”

“So you know something about it?” he said quietly, and leaned forward. “Now do you mind telling me what you know?”

He had not been hoaxing me. There was a curious significance in his manner, in the way he was looking at me, and it persisted while I told my absurd story. Told it badly, I realize, and haltingly; that I had picked up a book on Black Magic somewhere or other, and had as promptly forgotten it, save for one or two catch phrases and that infernal symbol of a triangle in a circle; how I had foolishly repeated them to a group of women, and now seemed likely never to hear the last of it.

“As I gather, the Lear woman has spread it all over town,” I said. “She dabbles in spiritualism, or something, and it seems to have appealed to her imagination.” I thought of Cameron, too—to whom I’d sent the picture.

“It has certainly appealed to somebody’s imagination,” he said. “That’s the mark our friend the sheep killer has been leaving.”

He was very cordial as he picked up his hat and prepared to depart. He was sorry to have had to trouble me; nice little place I had there. He understood I was fighting shy of the other house. He would do the same thing; he didn’t believe in ghosts, but he was afraid of them.

And so out onto the drive, leaving me with a full and firm conviction that he suspects me of killing some forty odd sheep in the last few nights, probably in the celebration of some Black Mass of my own psychopathic devising.

From THE RED LAMP. Used with the permission of Penzler Publishers. Copyright © 1925 by Mary Roberts Rinehart. 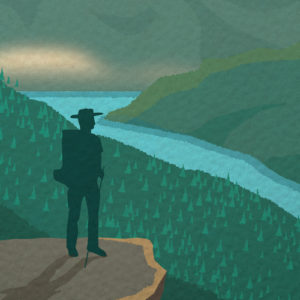 Crime Novels Are Better than Travel Guides It was only after returning from Santa Fe for the first time thirty years ago that I started reading Tony Hillerman, devouring...
© LitHub
Back to top