Once a Swamp, Always a Swamp

Hardly a news cycle goes by these days without some bombshell allegation splashing across the front of The Washington Post with reports of security breaches at the White House, mishandling of classified information, or meetings with the Russians that High-Ranking Administration Official X conveniently forgot to mention during the confirmation hearings. You could be forgiven for thinking the DC political workforce is now made up mostly of spies, collaborators and informants. It’s starting to feel like the Nixon 70s all over again, or maybe the early 60s circa Cuban Missile Crisis, or else that’s the scent of McCarthyism in the air.

Whatever damage the current political situation is doing to our national values and constitutional system, it might also be reinvigorating an old literary field with a venerable place in the postwar canon: the DC intrigue novel. It’s a welcoming, if sometimes fairly grim genre, with room enough for historical fiction, spy thrillers, murder mysteries, crime fiction, alternate history, and weighty literary epics. Depending on your current levels of outrage and paranoia, there’s likely a DC book to either stoke the fire, expand your way of thinking, or provide you with a bit of diversion in between the breaking scandals and the breathless news coverage.

Now, some out there may just prefer to stick to the straight-ahead non-fiction. All the President’s Men is at the top of anyone’s reading list when it comes to cover-ups and downfalls. Or maybe you’re in the mood for the blow-by-blow from David Halberstam or Jeffrey Toobin, or else you’d prefer to read memoirs from those who found themselves at the center of scandal and controversy. By all means, dig into those texts, but when you’re ready for the balance of intimacy and scope that only fiction can provide, the DC intrigue novels will be there waiting for you.

From Tricky Dick to the secret history of the CIA to sex scandals, spy scandals, and all manner of high crimes and impeachment madness, here’s a selection of paranoid thrillers and conspiracy classics from the nation’s capital. 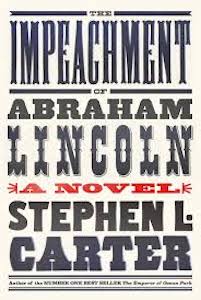 It’s hard to imagine any writer better equipped to take on the byzantine doings of a constitutional scandal than Stephen L. Carter, the bestselling novelist who also happens to be a Yale law professor and a former law clerk to Justice Thurgood Marshall. In The Impeachment of Abraham Lincoln, Carter reimagines post-Civil War DC had Lincoln lived to see the war’s end and the political reckoning for his alleged abuses of executive power. The book’s heroine is the youngest member of Lincoln’s defense team, tasked not only with saving the President’s career, but also solving a murder while she’s at it. Palace Council makes for an interesting companion. It’s Carter’s take on the Nixon era—another murder, another investigation, and all the trappings and corruptions of power. (The book’s title also serves as a reminder of the old council/counsel distinction the President is currently having a hard time with.) 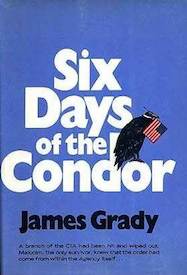 That’s right, with the novel you get three more days of the Condor, plus the fun of noting all the liberties and risks the movie took in adapting Grady’s 1974 conspiracy classic. The book is set principally in DC, not Pollack’s gritty 1970s New York, and the claustrophobia is even more intense. Ronald Malcolm is a low-level CIA man, responsible for reviewing mystery novels for code and plot points (…it’s a questionable job, but that’s the CIA for you). He comes back from his lunch break one day to find his station has become a slaughterhouse. When he tries to call in from the cold, his code name (“Condor”) only stirs up more trouble. This is quintessential 1970s government thuggery, and if you want to read with Robert Redford and Faye Dunaway in mind, then by all means, you’re a (sort of) free citizen. 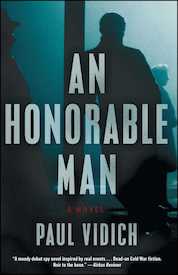 An Honorable Man is one of the more impressive espionage debuts in some time, a book that earns its place in the Le Carré tradition. George Mueller, a Yale man and a seasoned case officer, performs the Smiley-esque spy work of rooting out a Soviet mole. Vidich sets his story in the McCarthy era, a snarl of backstabbing, suspicion, and secrets. This DC is, in short, “a terrible place for honorable men to work.” The book’s primary conceit is cynical in the finest tradition of continental spy literature: both countries, both systems are irredeemably corrupt, and the spies working in their service are only playing a sisyphean game, occasionally to the death. But even in that Cold War morass, Vidich manages moments of vivid humanity, not to mention a brooding DC atmosphere to rival any of the city’s crime fiction or noir. 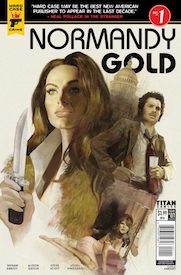 Normandy Gold is breaking new ground, part of Hard Case Crime’s rollout of crime fiction in graphic form, with the first issue set for a June release and the book compilation due out by winter. It’s also the work of a partnership between two contemporary crime and mystery stars, Megan Abbott and Alison Gaylin, with art by Steve Scott. The story starts with a death in a DC hotel room, which prompts the victim’s sister, a small town sheriff named, naturally, Normandy Gold, to investigate a sleazy circuit of escorts, politicos and power brokers. You can expect a large dose of sex, crime and murder, but with Abbott and Gaylin at the pen, you can also rest assured that the characters and their relationships will hit home, too. 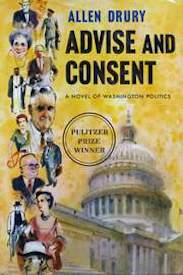 This is the DC political procedural that launched the genre and remains one of its most compelling fictions. Chronicling the nomination of a new Secretary of State, Advise and Consent is an indictment of both left and right in the post-war Capitol. The President’s nominee is a liberal believed to be sympathetic to the Soviets, and so the intrigue begins—the back-room deals, the covert ops, the perjury, blackmail and suicide. Readers will recognize many of the era’s figures—stand-ins for Alger Hiss and Joseph McCarthy, especially—but more than anything, it’s the shamelessness of the Congressional maneuvering that strikes a familiar chord. Almost 60 years later, Drury’s novel remains a gold standard, an anti-West Wing for anyone still possessed of illusions when it comes to our leaders. 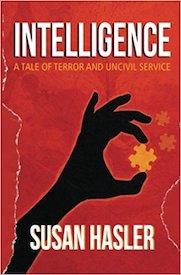 Hasler’s first novel is one of those DC satires in the style of Iannucci or Isherwood, where you hope none of it’s true but suspect it probably is. In this case there’s even more reason to believe, since Hasler, before launching her writing career, worked at the CIA for over 20 years as a linguist, analyst and speechwriter. In Intelligence, the President only wants to hear information that supports his own warped worldview and demands that the CIA toe the line. One agent goes rogue and assembles her own team to do what the leadership won’t. The story is told with a healthy portion of world-weary humor and inside baseball—more or less what you’d expect from a career spook. 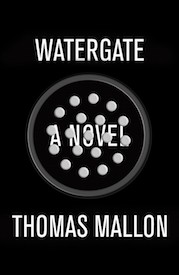 Here’s the Nixon regime in all its petty, paranoid glory, the story of the scandal as imagined by Mallon, America’s master of high historical fiction. (Think of this as an American cousin to Wolf Hall.) The vivid portraits of miscellaneous crooks and climbers passing through the White House are unforgettable, but the book’s most penetrating insight, the one that still resonates, is that Nixon and his loyalists (in Mallon’s version) really believe history will vindicate them, that they’ll be remembered with tributes and monuments. The delusion is astounding and somehow touchingly human. A few weeks ago in The New York Times, Mallon suggested that President Trump would be well served to read H.R. Haldeman’s diaries from the Watergate era. A fanciful idea, given the President’s reported aversion to reading, but it’s good to know Mallon is still keeping tabs on the White House. 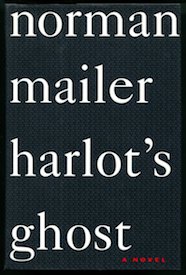 The chutzpah behind this novel makes it a worthy read anytime, but especially in a moment of looming national crisis. Its 1,300-plus pages span the modern history of America’s covert intelligence operations. Some of it’s true, much of it’s imagined; at its best, the prose pulses with that special energy Mailer could summon when he was truly locked in on a subject. The story focuses on Harry Hubbard, recently cuckolded by a colleague and bereft of a mentor. He flees for Moscow and the comfort of his memoir, which doubles as the story of the CIA, in particular the agency’s involvement in Cuba and the JFK assassination. There are moments of bombast and hubris in Harlot’s Ghost, and moments when you’ll think you can’t take another page, but for anyone interested in intelligence or literary ambition, this is a cornerstone read, and a far more engrossing story than the De Niro film (The Good Shepherd) that borrowed so heavily from it. 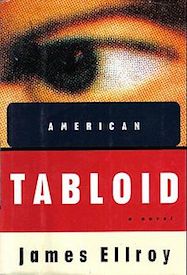 Ellroy’s trilogy is every bit Mailer’s rival in scope and ambition—another alternate history that might seem far-fetched at first, but once the thrills and twists settle in, you can’t help but suspect it’s as plausible a version as any. Together, the three books amount to a crime-and-conspiracy laden rendering of nearly every major political event in the Americas from the 1950s through the fall of Nixon. American Tabloid is the most popular of the trilogy, focusing on Cuba and the Kennedy brothers, but the two later novels share many of its merits—the third-person perspective rotating between gangsters and operation goons, the fictional documents slipped into the text, the gallows humor, and the spine-chilling web of linked assassinations. And since we’re currently in search of a new flunky to run the FBI, it’s worth savoring Ellroy’s send-up of the petty, paranoid J. Edgar Hoover. 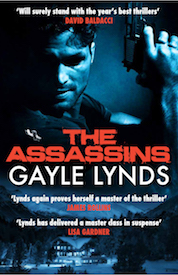 With a bibliography growing by the year and a reputation for intricate, engrossing plot, Gayle Lynds has lately risen to icon status in a genre long dominated by men. For DC espionage and atmosphere, look to The Assassins (part of her Judd Ryder series) or Mesmerized, featuring one of Lynds’ best heroines, Beth Convey. For something more far-flung, Lynds’ debut, Masquerade, and her 2010 post-Cold War epic, The Last Spymaster remain two of her strongest. These are page-turners, to be sure—well suited to a vacation or, say, a long train ride if you should find yourself shuttling between New York and the hearings, investigations, and protests in D.C.

A few more authors to consider
*

For D.C. crime far away from the politics: George Pelecanos, the master
*

For a murder mystery written by a First Daughter: Margaret Truman
* 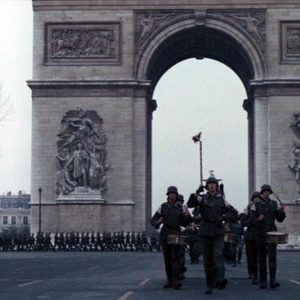 The Anglo-American love affair with Paris has always been complex, and such great and diverse writers as Henry James, James...
© LitHub
Back to top