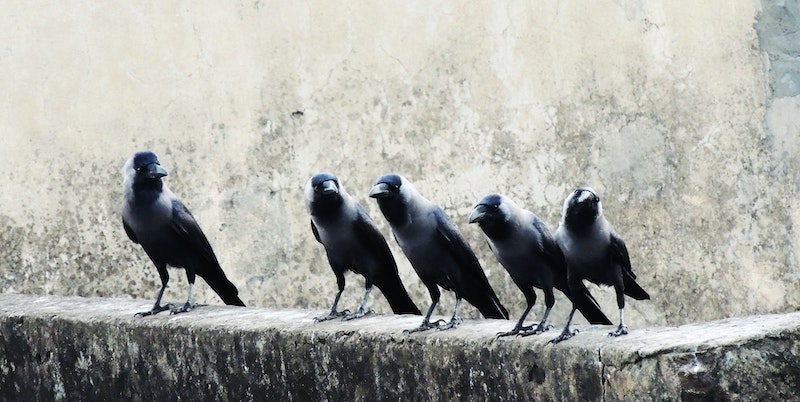 (But They May Be The Criminal Masterminds of the Bird World)

So, have you ever met a crow? Ever talked to a crow?

You walk out onto your patio or deck one day, and there perched nearby is a crow. A big, glistening black bird with alert, intelligent eyes regarding you enigmatically. Not flying off at the first sound as so many other birds do, but clearly watchful. Maybe even wary. Maybe turning his (her?) head this way and that way so both alert eyes can study you.

What’s your first reaction? Do you think the big bird might get into your feeders? Might keep smaller birds away, and hog the birdbath? Or maybe pester your pets? Because, you know, large bird.

Or do you feel more than think about the crow? Are your instincts uneasy? The hair on the back of your neck stirring? Is the sound of their cawing like fingernails on a blackboard to you? Does it make you uncomfortable, that stare? Do you think back to a scary movie lots of us remember and wonder? Are you tempted to pick up something and throw it, or wave it, or to just yell at the bird to go away?

They remember if you’ve been nice to them.

Or if you haven’t.

Take another look at the crow. Big, isn’t he (she?)? Could do some respectable damage if he (she?) wanted to, right? Maybe why they were one of the villains in that scary movie. Maybe you even wonder, since a flock of crows is called a “murder,” whether they might be creatures it would be better off to avoid.

I think crows get bad press.

First of all, consider intelligence. Some believe crows may be as smart or smarter than primates, possibly because of the relative size of their brains. They are acutely aware of their surroundings, and choose those carefully so as to provide the best homes for themselves.

If you’ve got a family of crows about—typically around 20 birds—it’s likely because there are good food sources available to the birds. See, crows will eat most anything, and they’re opportunistic feeders. And smart, remember. They like your trash, especially if you leave the lids off the bins. They like grain and wild berries, and of course they are carrion birds, so road kill is something that (Yuck!) attracts them.

And maybe they see those bird feeders of yours as an open invitation, though the food itself is less likely to be a draw than you may believe. It’s more likely that the feeders draw other birds to nest nearby, and crows have an unfortunate habit of raiding the nests of other birds for eggs and helpless young birds.

The cycle of life.

If you live in a heavily forested land, or otherwise have many trees around your house, you’re less likely to find crows hanging about; they like open areas with fewer trees, including cityscapes and suburban neighborhoods. Maybe they learned to stick close to such areas because hunting is less likely there. You think? I do. As dark omens of a kind, they’ve been hunted by nervous mankind over time, certainly here in the US, and crows are, as I said, smart. They learn where they’re likely to be safer and have food.

They can use tools, did you know that? They can even make their own tools. And they’ll not only stick together to mob a larger target (like hawks and owls) but will also call out for reinforcements if needed. And reinforcements come right away to help. How’s that for cooperation?

They post sentinels to keep an eye on things.

Guards. Watchers on the walls.

They take care of each other, and not just by having sentinels to warn of approaching predators. They learn from one another. Families often include younger birds from earlier nesting seasons that help care for chicks. On the other hand, they also have a form of social awareness that rewards cooperation and punishes selfishness; hog all the food or otherwise show yourself to be a jerk, and the other crows are not going to want you around. They will make this very plain to you.

And did you know that crows mate for life?

Feed crows who live around you and you may find that they leave gifts for you—things like lost keyrings or jewelry, small bones, even rocks—in thanks. On the other hand, perhaps the “gifts” are accidental, and what the crow learns is that appreciative people leave more food out!

We mustn’t ascribe them human emotions and other characteristics, right? That’s what scientists so often say, rather conveniently forgetting that we ourselves are animals. So maybe we can argue about whether crows have emotions. On the other hand …

Play is an important part of their lives; they appear to invent games with each other, often using items they find on the ground. Sounds like crows having fun, right? Emotions again. They are rather famously attracted to bright objects, and it’s not unheard of for a crow to have a stash of personal objects or toys hidden away for his—or her—own enjoyment. They are capable of as many as 250 different calls. And they are also capable of mimicking the calls of other birds, other animals—and even us.

But a crow just speaking crow is interesting in and of itself. I mean, if a murder of crows sets up a ruckus when you go outside, they may be trying to tell you something. That you were mean to them yesterday or last week. Or even last year. Or that there’s a snake in the grass and you’re being warned. Or maybe just that it’s dinnertime and how’s about it?

And did you know that they hold funerals for their own dead?

We’ve probably all heard the reports of elephants visiting their dead, apparently in grief and respect; why shouldn’t we expect something similar from other intelligent species?

But let’s get back to that bit about crows being bad omens.

They permeate our culture, and many of us view them as ominous, eerily threatening birds. There’s something unsettling about those direct, penetrating stares. Right?

And a flock of them is, after all, called a murder. Mustn’t forget that.

So maybe they’ve earned our wariness and suspicion?

That doesn’t mean that the appearance of a single crow, or a murder of crows, heralds something bad. Really, it doesn’t.

Only there is something you should really keep in mind. Crows not only remember whether you’ve been nice or mean to them, they also tell their friends. And those crows take it personally. They remember, and they continue to spread the word about you. Pretty well indefinitely.

So if, when you step outside, that murder of crows sets up a ruckus, loudly scolding, maybe you’d better examine your conscience.

Kay Hooper, who has more than thirteen million copies of her books in print worldwide, has won numerous awards and high praise for her novels. She lives in North Carolina. Her latest book, Hidden Salem, is now available from Berkley Books. 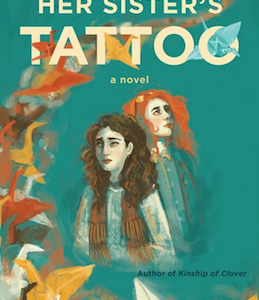 It’s Detroit, 1968. Sisters Rosa and Esther march against the war in Vietnam with their best friend, Maggie. As they...
© LitHub
Back to top