He was Britain's most popular detective. Then he all but disappeared from the pop culture. Or did he?

For nigh on seventy years, the detective Sexton Blake, star of penny dreadfuls, story papers, comics, stage productions and silent movies, had represented what, throughout the period, was considered the “best of British.” He was stiff-upper-lipped, square-shouldered, straight-backed, intellectually superior, morally unassailable, principled, generous, dry-witted, self-sacrificing and entirely superior.

However, as the twentieth century chipped inexorably away at the British Empire, so too, there was a very long and slow decline in enthusiasm for Sexton Blake. We Brits became rather less sure of ourselves, and by the Swinging Sixties, Blake felt a little too much like the “old guard,” a dust-covered and creaky public relations officer for an establishment now being mocked and scorned by the “groovy” new generation.

The famous detective had, over an extraordinarily long period, been published in three formats: story papers, such as Union Jack, Boys’ Friend and Detective Weekly, spanning 1893 to 1940; picture strips in Knockout Comic from 1939 to 1960; and in The Sexton Blake Library, a periodical that launched in 1915 and ran for forty-eight years. The latter’s demise caused the first break in his otherwise unbroken run; the only year since his Edwardian-era genesis in which not a single Blake tale saw the light of day.

The final issue of The Sexton Blake Library was published in June 1963. In November of that same year, the BBC transmitted the debut episode of a TV series created by Sydney Newman and Verity Lambert. It was Doctor Who.

By 1965, Who was an established hit, and Newman and Lambert, along with Who writer Donald Cotton, moved onto their next project. Newman was a big Sexton Blake fan and wanted to bring the long-lived crime fighter to the nation’s TV screens. The idea was to have Blake frozen by an arch enemy in 1902 before then being revived in the contemporary world. This, they thought, would give them an opportunity to take a satirical swipe or two at Mary Whitehouse, an establishment figure who was, at the time, decrying the state of modern-day morals.

Newman and Lambert, however, immediately ran into a problem. Sexton Blake as a character was owned by Fleetway Publications, the stories being commissioned, purchased and edited by W. Howard Baker. Baker, faced with plummeting sales, had in 1956 given the detective a considerable overhaul, yanking him away from his somewhat Sherlockian roots to transform him into a much more Bond-like hero, complete with dolly birds, double entendres, and volcano-dwelling super-villains. While Baker’s “New Order” stories for the most part remained within the crime genre, in some, more fantastical elements were emphasized, giving a dash of science fiction or horror. This harked back to Blake’s Golden Age, the 1920s, which had also contained much that was outlandish.

In 1965, with the Library having “rested” for a year, Baker was now reviving it in paperback format. He didn’t think his updated Blake was compatible with Newman and Lambert’s retro version. He therefore refused the BBC the rights to the character.

The TV project went ahead anyway but Blake was dropped from it, the protagonist becoming instead a new creation: Adam Adamant. With his keen intellect, multiple degrees, athletic prowess, talent for fisticuffs and ju-jitsu, excellent swordsmanship, and, of course, old-style stiff-upper-lippedness, Adamant was conspicuously Blake in all but name.

Adam Adamant Lives! lasted for two seasons, broadcast in 1966 and 1967. It starred Gerald Harper as the revived Edwardian crime-fighter and Juliet Harmer as his young assistant. Unfortunately, the show didn’t to live up to Newman’s expectations and couldn’t escape the shadow of its considerably more lavish competitor, The Avengers. It was cancelled in March of ‘67.

Meanwhile, having received a lackadaisical response to his new line of Sexton Blake paperbacks, W. Howard Baker had a change of heart and sold the broadcast rights to Rediffusion who, six months after the end of Adamant, debuted Sexton Blake, starring Laurence Payne as Blake and Roger Foss as his sidekick, Tinker. The series was set, albeit rather unconvincingly, at the tail end of the 1920s, and, as Baker had done with the updated Library, it hearkened back to the more bizarre yarns of that decade. For example, “The Invicta Ray,” concerned a crook who could make himself invisible, which echoed the “Mr Mist” stories written by Gwyn Evans and published in Union Jack in 1928. This oft overlooked aspect of Sexton Blake has about it a distinctly Doctor Who-ish flavor.

The Sexton Blake TV series proved very popular and ran for fifty episodes, the last of them shown in January of 1971. Valiant comic carried picture strips based on the show, which also ended in 1971, bringing Blake’s phenomenal publishing run to a conclusion.

That same month, Patrick Troughton’s reign as the second Doctor finished. His vagabond cosmic clown regenerated into Jon Pertwee’s altogether more incisive, sophisticated and foppish incarnation; one that, it might be observed, bore a distinct resemblance in both character and attire to a certain Mr. Adam Adamant!

In these three characters—the Doctor, Adamant, and Blake—with their intertwining timelines and cross-fertilizations, I think we can see the old archetype of Britishness struggling to redefine itself in a new, empire-less age. From the period of readjustment that began when Blake “paused” in 1963, the same year the Doctor was “born,” and finished in 1971, when Blake “died,” Pertwee’s Doctor emerged with much of the old detective incorporated into him. He was dashing and intellectual, a charming gentleman but also Bond-like (the gadgets and vehicles!), a master of martial arts and a man of action … but now he was also trendy and “with it.”

Thus, we see that when Blake’s quintessential Britishness became anachronistic, the elements that no longer functioned in the modern world were discarded and what remained passed to a new character. The Doctor’s non-Earth origins (which weren’t fully established until Pertwee took the role) made him the perfect candidate to take over from Blake, for by definition, alien lies outside of Establishment. He’s still in essence a crime-fighting Brit, just as he always was; only now, his criminal opponents tend to be extra-terrestrial!

Yup, I’m adamant: Who is Blake. 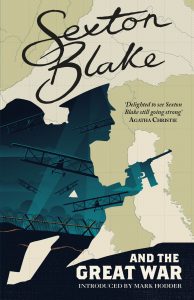 Mark Hodder is the author of the Philip K. Dick Award winning novel The Strange Affair Of Spring Heeled Jack and its seven sequels, and of the first officially sanctioned Sexton Blake novel to have been published in nearly half a century (he created and maintains BLAKIANA: The Sexton Blake Resource). He also writes short stories, flash fiction and vignettes. Mark was born in the UK. He has worked as a commercial radio scriptwriter, a freelance copywriter, and as a web content producer for the BBC.

Tokyo Crime Novels: The Storms Beneath the Calm Surface 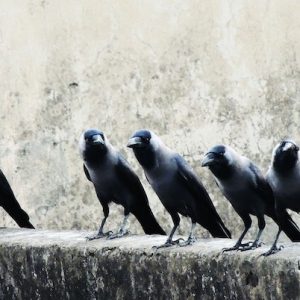 So, have you ever met a crow? Ever talked to a crow? You walk out onto your patio or deck one day, and there perched nearby...
© LitHub
Back to top