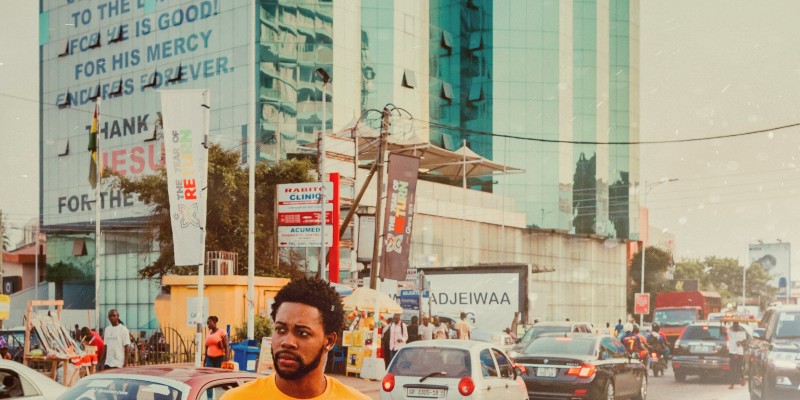 At the center of the world, an African story with a complex history and storytelling tradition turns to noir fiction.

Accra is the perfect setting for noir fiction. The telling of such tales—ones involving or suggesting death, with a protagonist who is flawed or devious, driven by either a self-serving motive or one of the seven deadly sins—is woven into the fabric of the city’s everyday life. Allow me to explain. 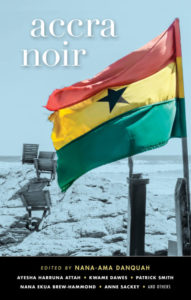 Accra is a city that stands at the center of the world. Of course, this is technically untrue. The center of the world is at the meeting point of those two imaginary lines that divide the globe into hemispheres, separating north from south and east from west—the equator and the prime meridian. It’s the intersection of 0° latitude with 0° longitude. Accra’s geographic coordinates are latitude 5° 33′ 21.6″ north and longitude 0° 11′ 48.8″ west; not quite the center of the world, but remarkably close. Those few degrees of distance notwithstanding, Accra has long served as the meeting point of east and west, north and south, as a cultural crossroads.

Accra is one of the most well-known cities in Africa. It’s the capital of Ghana, which in 1957 became the first sub-Saharan (read: black) nation to gain independence from colonialism. But the city, in all its globalism, predates the nation. Prior to becoming a sovereign land, the area now known as Ghana was the Gold Coast, a British colony formed in 1867. Ten years later, Accra was installed as its capital. For nearly a century, in addition to being a political and financial center, the city was a major hub of trade. People came from Europe and other African nations to trade everything from gold and salt to guns and slaves.

Accra is more than just a capital city. It is a microcosm of Ghana. It is a virtual map of the nation’s soul, a complex geographical display of its indigenous presence, the colonial imposition, declarations of freedom, followed by coups d’état, decades of dictatorship, and then, finally, a steady march forward into a promising future.

There is a story in every name, be it of a building or neighborhood such as Christiansborg Castle, Jamestown, Cantonments, Flagstaff House. Many roads and landmarks are dedicated to the architects of independence, not just Kwame Nkrumah, J.B. Danquah, William Ofori Atta, Edward Akufo-Addo, Ebenezer Ako-Adjei, and Emmanuel Obetsebi-Lamptey, the six men who are recognized as Ghana’s founding fathers, but other leaders as well, including those of the Non-Aligned Movement like Egypt’s Gamal Abdel Nasser, India’s Jawaharlal Nehru, and Yugoslavia’s Josip Broz Tito.

Given that Ghana’s Independence Day is March 6, one might wonder why there is a street named 28th February Road, situated by Black Star Square and Independence Arch. It commemorates the Accra riots, which began on that date in 1948, and continued for five days in response to the deaths of three protesters, ex-servicemen, at the hands of the colonial police. The riots were considered a clarion call for freedom. It makes sense then that 28th February Road leads directly to the monuments of liberty.

Inside Black Star Square, upon declaring Ghana a free nation, Dr. Kwame Nkrumah, the first president, issued another clarion call: “Our independence is meaningless unless it is linked up with the total liberation of Africa.”

This is not intended to be a history lesson, though history is perhaps the most straightforward way to explain how multifaceted the city is, how everything in and about it holds meaning and is sending a message. When in Accra, one learns quickly to look beyond the literal. It is not enough to consider a text; one must also consider the context, beware of a pretext, search for a subtext.

Earlier, I likened Accra to a map. As with most maps, there exists a legend through which one can decode any and all aspects of the place. Legends are merely definitions, commentaries.

Accra is a city of storytellers, people who speak and live and love in parables and aphorisms and proverbs. Sprawled on the back windows of taxis and trotros—the minivans that are used for unregulated public transportation—are sayings such as “cry your own cry,” “every day for thief, one day for master,” “jealousy will kill you,” “haste not in life,” and so on.

Admonitions and affirmations are also conveyed in symbols. The Ga people, an ethnic group that has inhabited Accra for over five centuries, have a system of symbols called samai. An example is adowa fai, the name of a symbol that translates literally into English as “deer’s hat” or “crown.” 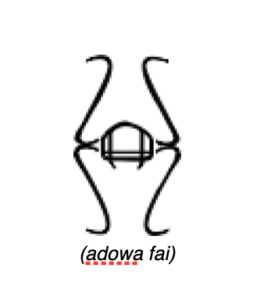 The message of this symbol is that the most admirable traits of the deer—such as its cunning, agility, wisdom, and swiftness—are also evident in a great ruler.

The tribes of the Akan clan also utilize a similar system of symbols called adinkra. An example is sesa wo suban, the symbol of transformation. The literal translation of the words is “change your character.” This symbol is actually made up of two other adinkra symbols, the morning star, which represents the dawn of a new day, and the wheel, which represents rotation or independent movement. 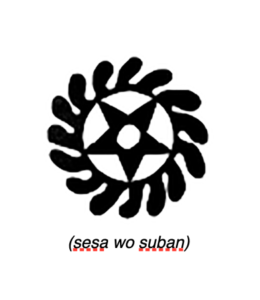 These symbols, from both the samai and adinkra, are ever present. They are used in the design of cloth, jewelry, and home decor. They are utilized in the creation of visual art and referenced in music and literature. They are an essential part of the culture that shapes life in Accra.

The use of proverbs is not limited to the windows of vehicles and a set of symbols belonging to a specific tribe. Far from it. When an individual dies, a special cloth is designed for mourners to wear at the funeral. Each cloth design has a name, and each name is an aphorism. Weddings and naming ceremonies are rife with parables. Everything in the culture revolves around story, and every story has a moral or theme, one that can be encapsulated in a pithy phrase. We are born into this tradition.

There is one name that every child in Accra who is able to walk and talk definitely knows—Kwaku Ananse. He is the closest thing we have to a mascot or superhero. Ananse is a trickster, capable of assuming any form, though his usual appearance is half man, half spider. The stories of his adventures and misdeeds are called Anansesem, or spider stories.

Before Kwaku Ananse won the right to have all stories bear his name, those stories belonged to Nyankopon, the sun god, and were called Nyankonsem. There are many different tales about how and why Nyankonsem became Anansesem; the one I will share with you happens to be my favorite.

Legend has it that Nyankopon issued a challenge. He wanted to teach Death, a taker, a lesson about loss. Anyone who could bring Nyankopon the golden broom, golden pipe, and golden sandals that belonged to Death would have all the stories renamed after them.

Everybody wanted the stories, but they feared Death. (Whenever my grandmother would tell me this story, she would pause after this observation and say, “That’s the way it is, Nana-Ama. Everyone wants to go to heaven but nobody wants to die to get there.”)

Only Kwaku Ananse, a slick and wily creature, was foolish enough to take Nyankopon up on the challenge. With the help of a few other creatures, whom he’d promised to feature in the stories once they became his, Ananse entered the Kingdom of Death, a place from which no one had ever managed to return. But Ananse did return—with the items he’d been challenged to retrieve. He also returned with Death hot on his heels. Ananse had planned for this turn of events. He and the creatures who’d helped him enter the kingdom had even laid out a trap. Once they successfully captured Death, they chopped it up into a thousand tiny pieces, which they then scattered all across the land. That is why Death now exists everywhere.

Nyankopon kept his word and turned the stories over to Ananse, making them Anansesem. The stories, particularly the ones that specifically feature Kwaku Ananse, attempt to prove the truth of a proverb by showing what happens when one does not heed its inherent wisdom.

One thing that people, too easily seduced by the city’s charm and history and beauty, forget about Accra is that it is a major metropolis. Accra is New York; it is Los Angeles; it is Shanghai, Mexico City, Santiago, Caracas, and Cape Town. It is an urban area, with poverty, desperation, and the inevitable result of a marriage between the two—crime.

In his book The Coming Anarchy: Shattering the Dreams of the Post Cold War, Robert D. Kaplan, an expert on global affairs, writes: “Crime is what makes West Africa a natural point of departure for my report on what the political character of our planet is likely to be in the twenty-first century. The cities of West Africa at night are some of the unsafest places in the world. Streets are unlit; the police often lack gasoline for their vehicles; armed burglars, carjackers, and muggers proliferate.”

The stories that you will read in this collection will highlight all things Accra, everything that the city was and is—the remaining vestiges of colonialism, the pride of independence, the nexus of indigenous tribes and other groups from all over the world, the tension between modernity and traditionalism, the symbolism and storytelling both obvious and coded, the moral high ground, the duplicity and deceit, the most basic human failings laid bare alongside fear and love and pain, and the corrupting desire to have the very things you are not meant to have.

Much like Accra, these stories are not always what they seem. The contributors who penned them know too well how to spin a story into a web, elaborate with a geometrical arrangement of lines and a beautiful network of fractals. Read them carefully; read between those lines. Consider the context, beware of a pretext, search for a subtext. Remember that in the culture that defines this city, everything holds meaning and is sending a message. Kwaku Ananse exists in each story, in different forms.

It is an honor and a pleasure to share these stories—classic Anansesem, spider stories, in the guise of noir fiction—and all they reveal about Accra, a city of allegories, one of the most dynamic and diverse places in the world.

NANA-AMA DANQUAH was born in Accra, Ghana, and raised in the United States. She is the author of the memoir Willow Weep for Me: A Black Woman’s Journey Through Depression, and the editor of three anthologies: Becoming American, Shaking the Tree, and The Black Body. Her essays, fiction, and poetry have been widely anthologized, and she has written for numerous magazines, journals, and newspapers, including Essence, Allure, the Washington Post, the Wall Street Journal, and the Los Angeles Times. During her tenure as an international speechwriter for the president of Ghana, the addresses she penned were delivered at the United Nations General Assembly, the African Union, the Palace of Westminster, the University of Oxford, and Harvard University. She has taught at Otis College of Arts and Sciences, Antioch University, Los Angeles, and the University of Ghana, Legon. She splits her time between Accra and Los Angeles, and has one daughter, the actress and writer Korama Danquah. She is the editor of Accra Noir.

Five of the Greatest Ambiguous Endings in Crime Fiction 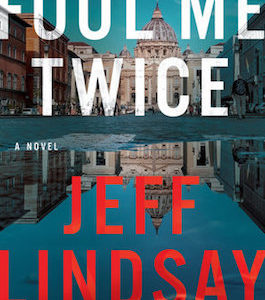 I was right about the guys in black. I have been dragged into a lot of cells in my time, from backcountry lockups to maximum‐security...
© LitHub
Back to top