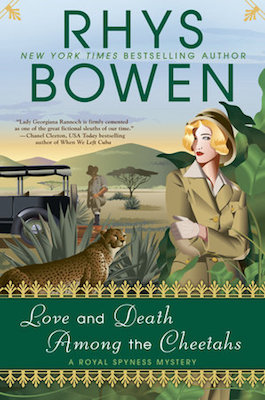 The following is an exclusive excerpt from Love and Death Among the Cheetahs, by Rhys Bowen. The thirteenth installment in the Royal Spyness mystery series lands our heroine, the plucky investigator Lady Georgiana Rannoch, in Kenya, where she's honeymooning with her detective husband Darcy O’Mara. But when a vacationing British aristocrat ends up dead from an apparent lion attack, Georgie and Darcy suspect that something far more sinister, and a lot more familiar, is lurking in the jungle.

So I allowed Zou Zou to kit me out for the garden party. Not only her beige silk dress with the navy trim but her jaunty little navy hat and gloves that gave it a nautical air. I looked très, très chic, as Darcy put it. He, poor fellow, was going to suffer in the heat as gentlemen never took off their morning suits and hats.

“I’m going to find a big tree and stay under it all afternoon,” he muttered to me as our taxi drove toward the palace.

“You can’t. You have to be sociable and chat.”

He made a face. “Between ourselves, I’m dreading this,” he said.

I looked at him with surprise. I had never known Darcy to be afraid of anything.

“Are you apprehensive about meeting royals en masse?” I asked.

“Absolutely,” he said. “You forget. I don’t mingle the way you do.”

“But you’re now related by marriage,” I said. “And most of them are awfully nice. You know the Prince of Wales, don’t you?”

“Sent abroad on a mission to visit the Commonwealth, to keep him away from a certain lady.” Darcy muttered this, in case the taxicab driver was listening.

We drew up at the side entrance that led straight to the gardens and joined a line of other, suitably dressed visitors waiting to enter. Binky and Fig were in line ahead of us and Binky turned back and waved. One by one our invitations were scrutinized and we were allowed onto the grounds. A band was playing. Small tables had been set out on the lawns. Binky and Fig came up to join us.

Champagne and lemonade were handed round. Then came the trays of canapés. I took a vol-au-vent and was about to pop it into my mouth when I realized it was too large to eat in one bite. I bit into it and puff pastry flakes promptly flew all over my navy front trim. What’s more there was a lot of dry pastry and very little filling.

“I don’t think much of these, do you?” Fig commented.

“There’s too much pastry and not enough . . .” I began, when a dry pastry crumb went down the wrong way. I realized, to my embarrassment, that at any minute I was going to cough. I put my hand up to my mouth, half choking as more pastry flakes came flying out.

At this moment there was a roll of drums, “God Save the King” was played, the doors leading to the terrace at the top of the steps opened and Their Majesties came out, followed by their children and spouses. I tried to stop coughing, swallow the remains of the vol-au-vent, brush off the crumbs and look respectable as we were lined up to be presented. If only the trim hadn’t been navy blue. . . .

“Are you all right?” Darcy whispered.

“Went down the wrong way,” I tried to whisper back, which only made me start coughing again. I was brushing furiously, while holding my breath, as the royal couple came closer. Queen Mary, as usual, looked calm and elegant in gray silk. The king, I thought, looked tired and frail. He had never really recovered from that bout of pneumonia.

I had been feeling rather proud of myself when we arrived at the palace. I was no longer the shy awkward girl. I was a sophisticated married woman, here with my husband. And I looked jolly nice, even if it was Zou Zou’s frock I was wearing. But now I had lingering pastry flakes down my front and I was terrified that if I opened my mouth to speak to the king and queen more pastry flakes might come flying out.

The royal couple had drawn level with us and stopped as they recognized me.

“Ah, young Georgie. Back from your honeymoon so soon?” the king asked as I curtsied to him. “I wasn’t expecting to see you here.”

“We’re back from the first part of it, sir,” Darcy said. I shot him an inquiring look.

“Oh, so you’re off somewhere else now?”

“I’ve told them they should go up to Balmoral ahead of us,” the queen chimed in. “They can have the estate to themselves. It is the perfect spot for a honeymoon. All alone with that glorious scenery and trout fishing . . . Should I have my secretary telephone and let them know that you will be coming?”

“It’s very kind of you, ma’am,” Darcy said, which was good as my brain had gone numb with panic. “But I’m afraid our honeymoon trip is already planned.”

“Really? And where shall you be going?”

I gave a little gasp, which was the wrong thing to do. I put my hand up to my mouth again as another cough threatened. I didn’t dare breathe. I just stood there, holding my breath.

“Kenya? You’re going to Africa for your honeymoon?” The queen looked surprised.

“That’s right,” Darcy said, giving me rather a smug grin.

I shot him a quick glance, still speechless, still holding my breath.

“My goodness. How ambitious,” the queen said.

“You’ll be going on safari, I expect,” the king chimed in, giving a nod of approval. “Going to try and bag an elephant or a lion?”

“How terribly exciting. Shall you be traveling by ship?” the queen asked, turning to me.

I took a cautious breath. “I’ve no idea, ma’am. Darcy has kept me in the dark about our plans.”

Article continues after advertisement
“I didn’t say anything because I wasn’t sure of all the details and whether we could secure a passage by air. But now it’s all set.”

“I wanted it to be a surprise for her,” Darcy said. “So I said nothing until everything was in place. We are going by aeroplane. It only takes five days instead of a long steamship voyage.”

“We shall certainly miss you at Balmoral this year,” the queen said, “but I’m sure it will be a great adventure.”

Equerries stepped in to chivvy them along the waiting line. As soon as they had passed I turned to Darcy. “Did you just make that up or is it true?”

“Now, why would I make it up?” he asked. “Of course it’s true. I didn’t say anything because I wasn’t sure of all the details and whether we could secure a passage by air. But now it’s all set. I managed to snag the last two seats on the next flight out and we leave on Tuesday.”

I had sworn never to say “golly” again now that I was a married woman but it just slipped out. “Golly,” I said.

The band struck up a lively tune, the crowd broke apart as the presentation had finished and more drinks and eats were handed around. I avoided any further food embarrassments and sipped a lemonade as we chatted with other guests. The Duke and Duchess of Kent came over to us. I hadn’t noticed before that Princess Marina was expecting a child. That was jolly good news. I offered congratulations.

“Maybe you’ll have your own good news before too long,” Prince George said, giving me a knowing wink. “I don’t imagine that husband of yours wastes any time.”

They had just moved on to converse with other guests when one of the footmen sidled up to me. “Her Majesty would like a word, my lady,” he said. He addressed Darcy then. “If you could spare your wife for a few moments, sir?”

I was led away to where the queen was sitting in the shade of an enormous beech tree.

I noticed that in spite of her long sleeves, she didn’t appear to be sweating at all. I don’t know how the royals do it. They never seem to exhibit any of the bodily functions of us mere mortals. I think they can go all day without visiting a loo!

A footman handed me another lemonade. I sat, beside her, praying that this wasn’t to persuade me to go to Balmoral instead of Kenya. She did like to get her own way.

“So you’re off to Kenya,” she said. “Such a long way for a honeymoon. What made your husband decide on that country?”

“I have no idea, ma’am. Darcy had promised me somewhere special,” I said. “But this came as a complete surprise.”

“I’m sure you’ll have a wonderful time,” she said. She hesitated, toying with her glass. “Did you know that my son will be arriving in Kenya any day now?”

“The Prince of Wales?” I said, careful not to call him David in public.

“Indeed. The king dispatched him on a long Commonwealth tour, hoping, of course, that a certain lady might find someone else during his absence, or, failing that, might blot her copybook in a way that even my son found unforgivable.” She leaned closer to me. “One does understand that she has not exactly been faithful to my son during their relationship. A secondhand car dealer?” She raised her eyebrows. “The German ambassador? So many rumors but I’m assured that most are true. The question is how much my son is prepared to forgive.”

“You are giving her enough rope to hang herself,” I said and she chuckled.

“Precisely. On the other hand . . . the latest cable from David says that he plans to stay on in Kenya after his official engagements are concluded and spend a few days with a certain Lord Delamere.” Again she leaned closer to me. “One wonders why. He has never shown that much interest in safaris before; in fact he once made it known that he thought it was poor sportsmanship to kill a magnificent animal just for a trophy. So I’d like to know just what he plans to get up to there.”

She patted my hand. “Which is why it’s so fortuitous that you will be there at the same time. You will be my eyes and ears on the spot. I know I can rely on you, Georgiana.”

“Of course, ma’am,” I said. There was nothing else one could say.

From Love and Death Among the Cheetahs by Rhys Bowen. Used with the permission of the publisher, Berkley. Copyright © 2019 by Rhys Bowen.

The Doctor Is In: How Psychologists Advance a Psychological Thriller 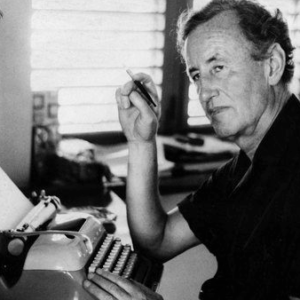 CrimeReads Brief: Week of August 17th "I think the boundaries in fiction are breaking down all the time, which is a great thing." Tana French talks...
© LitHub
Back to top