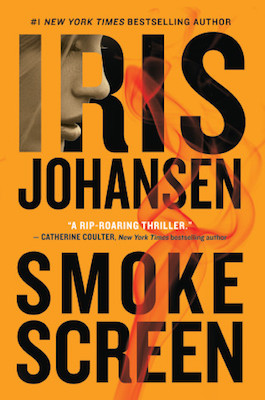 The following is an exclusive excerpt from Smokescreen, the new thriller from Iris Johansen. Johansen’s twenty-sixth installment in her Eve Duncan series begins when Eve, a forensic sculptor and detective, is contacted by a journalist begging for help to solve the mystery behind a massacre in a small African village. But when Eve arrives, she learns that she’s been lured there under false pretenses, and must quickly uncover why.

Eve stabbed in the phone number on the card that Jill had given her. She wasn’t surprised when Jill answered the phone in two rings. “Get over here. I want to talk to you.”

“I thought you might,” Jill said quietly. “Actually, I thought it could be—”

“Get over here,” Eve interrupted. “I’m angry, and on edge, and I want to see your face while I’m listening to what you say to me. You went to a hell of a lot of trouble to tear me apart, and I have an idea why. How quick can you be here?”

“Ten minutes. I’m in a motel just off the freeway.”

“I thought about it.”

“I’m sure you did. I’ll expect you in ten minutes, and don’t expect either coffee or politeness. We’ve gone past that now.” She hung up.

She got to her feet and moved toward the door to the porch. She needed air and to calm down a little before she confronted Jill. She hadn’t realized until she’d actually made contact with her how the anger had been building in the last few hours. Or perhaps it had started building earlier, during all the hours she’d been working on Nora last night.

She took a deep breath and gazed out at the lake, trying to steady herself.

Everything that she wanted to surround her while she was working on Nora and others like her who had been robbed of all three.

And this was Eve’s life, her home.

The anger was growing again.

But now she had a target.

Jill was driving down the lake road and pulling into the driveway.

Eve met her at the top of the stairs. “You’re early. You must be eager to see me.”

“I broke a few speed laws. I figured that you needed to vent before you exploded,” she said. “You don’t get angry often, but when you do, it’s supposed to be impressive.”

“Of course you’d know that about me, too. Research.”

“I think it was all part of your plan to manipulate me. You knew exactly how to do it. You knew which buttons to push and took time to coordinate them in the right order.”

“Are you? I don’t believe you. I think it was all part of your plan to manipulate me. You knew exactly how to do it. You knew which buttons to push and took time to coordinate them in the right order.” Her lips tightened. “Those photos and biographies were a masterstroke. They brought me down as if I’d been run over by a fifty-ton truck. You knew they would, didn’t you?”

“Yes. It was your principal weakness.” She added, “And your greatest strength. I had to use it.”

“You’re not even denying it.”

Eve stared at her in frustration. It was difficult to hold on to her anger as she gazed at the reporter. Jill wasn’t boasting; there was only vulnerability and that sadness Michael had noticed. “Not yet. I hate being manipulated. Last night, I started thinking about every way you’d done that since you walked in here yesterday afternoon. It took me a little while to get it together because you were so clever and so good at what you do. Even those photos weren’t close-ups of the children. Just loving family shots. Because you knew I never looked at facial photos of my reconstructions.” Her lips tightened. “And then you hit me with the photos after the massacre.”

“I didn’t want to do it. But I had to convince you.” She moistened her lips. “We need you, Eve. You don’t realize how much. But I promise if you come, that you’ll see how worthwhile it is.”

“I can tell that you think it is. But you’re asking me to put my life and career on hold while I do those reconstructions.”

“Only for a few weeks. I told you, I wouldn’t expect more from you.”

“How generous of you,” she said dryly. “It’s what I expect of myself that matters. You’ve been playing me to get what you want, but that’s over.” She was silent. “I’m the only one in charge of what I do, but there are things I have to know before I commit.” She stared her straight in the eyes. “Is everything you told me the truth?”

“Even those stories you wrote about the children at the school, their stories?”

Jill nodded. “I swear it. You can ask their parents and grandparents. You believe me?”

Eve couldn’t help but believe her. “You’re so good at what you do. I had to be sure.”

“I am good. I’m a fantastic storyteller. It’s my primary talent. I have others, and I’ve always had to use whatever skills I have to survive. But I try to be honest, Eve.”

“I had to be sure about that, too. You told me not to take you at face value. I didn’t. I spent a little time this morning finding out about you.”

“I thought you might. Did you discover anything interesting?”

“You spent your entire life until you were eleven years old trailing around the world with your father, who was a photographer. When he was killed in Tibet, it took the U.S. consulate over a year to get you back to the States. But you had no relatives, so you were fostered out for the next five years. Then you worked your way through a community college and started freelancing. Your gift for languages helped you to get ahead, but the first couple years must have been hard.”

“Not that bad. I liked traveling around on my own again. I was a little gypsy until my father was killed.” She added, “But you didn’t find anything incriminating, did you? Other than being a loner, I’m pretty much what I appear on the surface.”

“I wanted to find something.”

“I know you did. It would have been an excuse to close your eyes again.” She paused. “Are you going to come with me?”

“I’m close,” Eve said jerkily. “Not because you want me to do it. Whether it was for a good cause or not, you tried every weapon in your arsenal to make me do what you wanted. And I could see how you’d pried and researched into who I was to make that happen. That’s probably what I resent most. Talk about violation of privacy? And you did such a damn good job.” She gestured impatiently. “No, it’s because last night I realized those stories were like a poison inside me. I couldn’t forget them. And I knew the only way I might be able to was to do something to help, to heal, those children. But you probably knew that would be my reaction?”

“I thought it was likely. You’re very caring.”

“And I can’t heal them, but I might be able to heal those closest to them.”

“So when I decided that those stories might have trapped me into doing this, I decided I had to look the situation over and explore how bad it might be. First. My family. I have a husband and a son who need me. And I need them. From what I’ve been able to find out, Maldara is still too unstable to be considered safe on any level. Yet you said that I’d be safe while I did those reconstructions. How?”

“I have friends at the embassy. And the U.N. staff on-site think reporters have to be given special protection. No bad press. I’ll just convince them to extend that protection to you.”

“From what you said, they don’t even want the work done at Robaku.”

Jill grimaced. “But I’ve been a thorn in their diplomatic asses over the last year. They’ll be glad to shut me up and get rid of my nagging as long as it doesn’t affect their budget.” She added, “But, you know, it might be a good idea for you to call one of those charities you mentioned and tell them you’re volunteering to do the job. You have tremendous name recognition, so there’s no question they’ll jump at sponsoring you. Just ask them if they’ll contact the U.N. and advise them you’re operating at their request. That way you’d get the official protection and not raise any U.N. hackles by mentioning me.” She shrugged. “And the charity would get credit in the international community that might translate to donations later. Everyone wins.”

Your Guide to the Essential Crime TV of August 2019 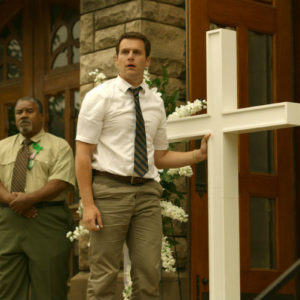 Your Guide to the Essential Crime TV of August 2019 It’s August, which means it’s really too hot to be outside, and all your summery activities serve only to maintain the illusion...
© LitHub
Back to top