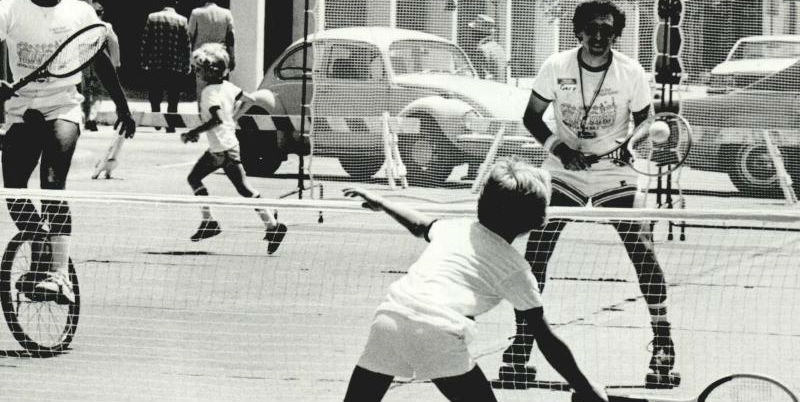 Decades Later, an Obsession
with a Predator Grows

It was 2008. I was driving to a college reunion with an old boyfriend, Michael. We were both in our early thirties. He was a poet and I worked for a tabloid newspaper. We were hunting for meaning or something to do. A story we could write together about our college experience, the place we fell for each other but never dated, and now here we were heading back to Baltimore.

We traded benign college memories—the frat party where pledges swallowed live goldfish, the film professor who smoked on the Gilman Hall steps—but were soon onto the more tragic. Addiction, suicide attempts, a murder on campus.

At a Delaware tollbooth, I handed Michael a crumpled five-dollar-bill. Then I mashed my palm flat over the door lock—thwarting a sudden impulse to open the door and run. A capsule had been pierced in my brain, and now a memory leaked out. A man in a trench coat with his collar turned up.

The syllabic combination, the roll of the tongue, so familiar, so reminiscent of a time I’d buried away, I wanted to keep saying it.

“I have a story, but it didn’t happen to me,” I told Michael, though I didn’t remember exactly what the story was. I knew something terrible had happened, involving a plastic blow-up doll and shackles and a wheelchair. I knew Gary Wilensky was dead, and for a moment I missed him.

Later in the trip, I sat in a campus coffee shop and watched Michael across the street dwarfed by a sculpture of Native American lacrosse players. One bronze player loomed over him, penny-green stick poised to smash his head. Michael leaned against it and scribbled poetry. Again I thought of Gary, a drawing of him in a magazine, dressed in a trench coat, arm raised above his head brandishing… What was it? A flashlight? A baton? A cattle prod.

“This is stupid,” I’d said when Michael suggested we each describe the statue in our notebooks. “I’ll wait for you at the coffee shop.”

We’d been arguing the entire weekend. First when my car was towed, then in front of the statue, and later in a campus parking lot.

“What is your problem?” Michael asked, hands stiff in his coat pockets.

“This isn’t the story I want to write,” I said, because I was frustrated. I had questions that couldn’t be answered here, with him. I had a thought that needed to be completed, and everything that didn’t involve that thought was a distraction.

“Well, what do you want to write about?” he asked, exasperated.

“Gary Wilensky,” I said. I wanted to keep saying his name.

“But I can’t write that with you,” he said, throwing up his hands. “That’s your story. I’m not in that one.”

This was how we broke up, in a Baltimore parking lot, arguing about another man. He was right. I wanted to do my own thing, to shake loose the obligation of partnership, to be as alone as I was when I was fourteen. I wanted to be that girl, not this one.

Years later, still alone, I have driven in another car to Roslyn to dig up remnants of Gary Wilensky’s past. I am a reporter, I tell myself, because that is better than being a person with an obsession.

I am prone to obsessions. I know this. I fixate on one person compulsively. It is a brand of OCD that involves putting my eyes on every word or image pertaining to a specific person in order to feel in control of other parts of my life.

Jim Morrison came first. It was an obvious choice, an early teenage cult-follower move, spurred on by newbie sexuality and Oliver Stone. Though the obsession was less romantic than it was relentlessly mathematical—always counting the number of pictures of him that belonged to me; always memorizing his poetry, each unscripted moan in his songs; running through the encyclopedic collection in my head; believing that I could put him back together if I just had all the parts. And years later, when I was too old for it to be cute, the target was Keith Moon. Same thing—all the pictures, all the books and stories. Not even the music, this time, but the famed antics, and the photographs of his sticky bangs, his wild, puckish eyes, his glorious, mythologized self-destruction. For a year, I counted the pictures of him on Google Images until I could fall asleep each night.

The infusion of a dead man into my daily routine felt safe and made me less lonely, less desirous of real partnership. It made me feel in control of someone who was legendarily uncontrollable, and in effect braver, more in touch with the wildness inside of me.

I am prone to obsessions. I know this. I fixate on one person compulsively.

By this point, I have spent months coming up with new search terms to enter into a borrowed Nexus account, variations of Gary’s name misspelled, and feeling with each discovery—a Geraldo transcript! A 1984 UPI article!—that flimsy dopamine drip that squelches from the brain when an addiction has become routine. More.

I have already read everything about him on the Internet, which is strange in itself. Had his crime taken place now, there would be personal accounts from his students on social media, essays with click-bait headlines, a Facebook group, perhaps a hashtagged collection of photographs on Instagram.

He is dead in the truest sense, obsolete, which must rankle his ghost. Alive, Gary Wilensky tacked Gary Wilensky’s name on everything—T-shirts, magazine ads, newspaper articles. Dead Gary is barely a few pages on Google.

Nobody cares about him anymore, which makes the fact that I do, feel more significant. The difference between this obsession and the others is that I knew him. I was alive when he was alive. We sat between an armrest and breathed the same trapped air. It’s different because any worshipfulness I had for him was in the past, and any obsession I have for him now is more inquisitive. I believe that this obsession, this time, could be productive, legitimately enlightening, if I can just stay grounded in the facts.

Here is a fact: In April of 1993, the reporter called. I chewed the rubber coil and paced the white kitchen tile answering his questions. My mother listened on the other side of the swinging kitchen door.

A week later, I found the eight-page New York magazine article, “Break Point: A Tennis Coach’s Fatal Obsession,” on a coffee table in the living room. It opened to a photograph of a life-sized doll with yellow skin and a painted red mouth, slack and open.

Everything but her head was deflated. She was flesh-toned and flattened, folded up from the knees, arms crossed at her chest. But her head was round and human-sized, made of hard rubber, topped with bristly yellow hair that curled at her temples. One of her eyelids was lazily half closed as if she’d been drinking.

“A rubber sex doll found in the cabin,” read the caption. I stared at her until my mother took the magazine away. “You’ll finish this later.”

Twenty-odd years later, I did. When I returned from the college reunion, I visited my parents and said Gary Wilensky’s name.

My mother placed a finger to her lips and got up from her bed where we’d been sitting. She walked over to her desk, opened the bottom drawer, and removed a blue file folder with his name on it.

I believe that this obsession, this time, could be productive, legitimately enlightening, if I can just stay grounded in the facts.

Between the flat planes of cardboard was a stack of jaundiced folded newspapers, a brittle Newsweek magazine, two invoices for tennis lessons, each with a résumé printed in blue ink on their backsides, an index card stamped with the red outline of teddy bears and Disney characters holding Valentine’s heart-shaped messages: Luv U Lots. Be Mine. On the opposite side of the card was my address, Gary’s return address, and a label with the number for his tennis-tip hotline. Resting beneath the Valentine was the New York magazine article with the photograph of the blow-up doll. A startling image, still, so many years later.

My mother, the collector, the archivist, the character in the movie who catalyzes the hunt for the killer with a bread-crumb trail of old tabloid headlines. All through my teens and twenties I would scavenge her room when she was away, rifling through cabinets for old prescriptions, jewelry boxes for stale weed, bureaus for packaged tights, and desk drawers—that same drawer—for the manila folder where she kept photographs of two men she almost married who weren’t my father. The evidence that she was a young woman once, and I almost wasn’t. Strange how I never discovered the folder with Gary Wilensky’s name scripted in ballpoint pen until the need to claim her property had been replaced by the need to cultivate my own. All I had to do was ask.

I sprawled out on her bed to read the New York magazine reporter’s story on the life and death of Gary Wilensky. I looked for my name, but found only penciled-in brackets around two paragraphs on the third page of the six-page article. Brief impressions of Gary from an unnamed student who witnessed his mood shift in his final weeks.

I examined Gary’s old invoices, billing my mother for lessons once a week.

“Didn’t he coach me twice a week?” I asked her.

“That’s right,” said my mother. “I paid for the weekday lessons, but Saturdays were free.”

“They were free? Why were they free?” I asked.

“Because he thought you were good. He told me so. He wanted to get your game to the next level.”

“No, you were good,” she insisted.

There was the folder with the whole truth about Gary Wilensky laid out on her bed. And still there was some leftover pride separate from the facts, a preserved memory of a phone call between a tennis coach and a mother about a daughter who was special. A part of her still wanted to believe him. A part of me wanted to, as well. 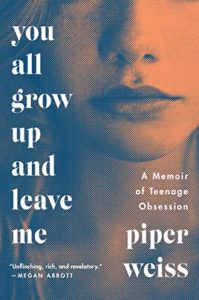 Piper Weiss has served as editor in chief at Levo, editorial director for HelloGiggles, and features editor for the New York Daily News and Yahoo. She is the author of the book My Mom, Style Icon and has written for various publications, including Hazlitt, McSweeney’s Internet Tendency, Elle.com, and Refinery29. She lives in Brooklyn, New York.
http://www.PiperWeiss.com 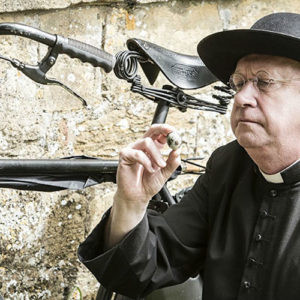 From the bespectacled Father Brown, blundering along with pipe and umbrella, to Clare Fergusson, the tenacious, Air-Force-pilot-turned-Episcopal-priest,...
© LitHub
Back to top