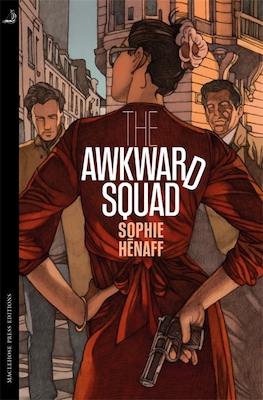 The following is an exclusive excerpt from The Awkward Squad, by journalist and bar owner turned writer Sophie Hénaff. In the following passage, a semi-disgraced police officer learns she is the new commander of a squad composed of the rest of the force’s rejects.

“Your new post takes effect in September. You’ll be heading up a new squad.”

Capestan could not help raising an eyebrow at this. Her reinstatement had been enough of a surprise; entrusting her with a position of responsibility was starting to look suspect. Something about Buron’s little speech had the effect of the crack of knuckles that usually precedes a punch.

“It’s a special, force-wide initiative,” Buron explained with a distant look. “As part of the police’s restructuring that aims to optimize the performance of various frontline services, an ancillary squad has been formed. The squad will report directly to me, and will comprise some of the force’s least . . . conventional members.”

“The squad will report directly to me, and will comprise some of the force’s least . . . conventional members.”

While Buron delivered his spiel, his associates looked bored beyond belief. Fomenko was studying the collection of old medals in Buron’s glass cabinet without any real interest. From time to time he ran his hand through his white hair, tugged at the bottom of his vest, or gazed at the points of his cowboy boots. His rolled-up shirtsleeves revealed hairy, muscular forearms: a reminder that Fomenko could unhinge your jaw with one swing of his fist. As for Valincourt, he was fiddling with his watch in a manner that made it plain he wished it would speed up. He had clean, angular features and a dark complexion that brought to mind an Apache chief, an old soul that had been through many incarnations. He never smiled and gave off a permanent air of irritation, like a monarch who takes offense at the slightest inconvenience. He was no doubt reserving his attention for more lofty concerns, an altogether higher purpose. Mere mortals would do better than to disturb him. Capestan decided to put them all out of their misery.

The casualness of her tone irritated Valincourt. Like a bird of prey, his head revolved abruptly to one side, revealing a powerful hooked nose. He shot Buron a questioning look, but it took more than that to ruffle the chief. Buron even allowed himself a smile as he edged forward in his armchair.

“Very well, Capestan, here’s the bottom line: we’re cleaning up the police to give the stats some gloss. The drunkards, the thugs, the depressives, the layabouts, and everyone in between—the people hamstringing the force but who can’t be fired—are all to be absorbed into one squad and forgotten about in some corner. With you in command. Starting in September.”

Capestan did not react at all. She looked toward the window, taking in the blue shades playing across the double glazing. Beyond the glass, she watched the gentle ripples of the Seine gleaming beneath the clear sky, giving her brain a moment to extract the meaning of this pitch from the men in suits.

A shelf. One big shelving unit, basically. Or rather a trashcan. A bunch of down-and-outs discarded into the same Dumpster; the department’s shamefaced pigsty. And she was the cherry on the top. The boss.

“Why me in command?” she said.

“You’re the only one ranked commissaire,” Buron replied. “Oddly enough, most people with a penchant for thuggery or drunkenness don’t get much opportunity for promotion.”

Capestan would have bet good money that this squad had been Buron’s idea. Neither Valincourt nor Fomenko seemed to approve of the scheme: the former out of disdain, the latter out of indifference. Both of them had better things to do, and this whole business was a tiresome distraction.

“Who’s in the team?” Capestan said.

Buron stuck out his chin and leaned forward to open the bottom drawer of his desk. He pulled out a thick, bottle-green leather folder and dropped it on his blotter. There was nothing written on the cover. The anonymous squad. The chief opened the dossier and picked out a pair of tortoiseshells from the lineup of glasses below his lamp. Buron had a variety of spectacles that he alternated depending on whether he wanted to appear reassuring, trendy, or strict. He began reading.

“Alcoholic? So there’ll be no shortage of personnel . . .”

Buron closed the folder and handed it to her.

“I’ll leave you to study it at your leisure.”

She tested the weight: it was almost as heavy as the Paris phonebook.

“How many are we? Are you ‘cleaning up’ half the police force?”

As the regional chief sank back into his chair, the brown leather issued a creak of surrender.

“That’s not a squad, that’s a battalion,” Fomenko jeered.

Forty. People who had taken bullets, done days of stakeouts, piled on the pounds and filed divorce papers for the sake of the force, only to be spat out into this dead end. They were being sent to a place where they would finally hand in their notice. Capestan felt sorry for them. Curiously, she did not count herself as one of them. Buron sighed and removed his glasses.

“Capestan, most of them have been off the grid for years. There’s no chance you’ll even see them, let alone get them to do any work. As far as the police force is concerned, they no longer exist: they’re just names, that’s it. If any of them do turn up, it will be to swipe the stationery. Don’t be under any illusions.”

“Yes. Dax and Évrard are lieutenants, Merlot and Orsini are capitaines.”

Buron paused for a moment and concentrated on the arms of his glasses as he twiddled them in his hand.

“José Torrez is a lieutenant, too.”

Torrez. Better known as Malchance: the unlucky charm, the black cat you would never want to cross your path. Finally they had found a place for him. Isolation had not been enough—they had pushed him even farther away. Capestan knew Torrez by reputation. Every police officer in the country knew Torrez by reputation and would always cross themselves when he was nearby.

“As far as the police force is concerned, they no longer exist: they’re just names, that’s it. If any of them do turn up, it will be to swipe the stationery. Don’t be under any illusions.”

His story had started with a simple accident: a partner was stabbed during an arrest. Fairly routine. While the officer was convalescing, his replacement was injured, too. Occupational hazard. The next one took a bullet and spent three days in a coma. And the last guy had died, thrown off the top floor of a tower block. Any blame on Torrez’s part had been brushed aside each time. He had not been responsible in any way, not even of negligence. But his aura became thicker than pitch: he brought Bad Luck. No one wanted to be on Torrez’s team anymore. No one wanted to touch him; few would even look him in the eye. Except for Capestan, who didn’t give credence to such things.

“I’m not superstitious,” she said.

“Oh, you will be,” Valincourt said, in a funereal tone.

Fomenko nodded in agreement, suppressing the shudder that rippled down the dragon tattoo on his neck, a souvenir of his days as a young man in the army. Nowadays, Fomenko wore a big white mustache that fanned out beneath his nose like a shaggy butterfly. Somehow the mustache didn’t go too badly with the dragon.

Every time Torrez’s name was uttered, a silence fell over the room for a few moments. Buron filled it.

This time, Capestan sat bolt upright in her chair.

“The very same,” Buron replied, spreading his arms resignedly. “I know, he didn’t make things easy for you.”

“No, he wasn’t the most flexible. What’s that fair-play fanatic doing here? IGS isn’t even part of the police judiciare.”

“A complaint was filed, something about a personality clash at IGS: basically an internal affair at the internal affairs division, and they decided they didn’t need him anymore.”

“But why the complaint?”

Lebreton might have been monstrously uncompromising, but no one could accuse him of being shady. The chief shrugged the question aside, feigning ignorance. The other two scanned the cornice of the ceiling, smiling mischievously, and Capestan realized that she would have to make do with the party line.

“Let us not forget,” Valincourt said coldly, “you are hardly in a position to judge people for behaving aggressively.”

Capestan took the hit without wincing. It was true: she was not without sin, and she knew it. A ray of sunshine spilled across the room and she could hear the distant reverberation of a pneumatic drill. New squad. New team. All she needed now was her mission.

“Will we have any cases?”

Anne Capestan had the feeling that Buron was starting to enjoy himself. It was his little welcome-back joke, a knickknack to mark her brand-new position. After a decade and a half of service, she was back in first year, and this was her initiation ceremony.

“You should know that we’re not expecting any results.”

“Following an agreement between police headquarters, the local branch of the police judiciaire and the brigades centrales, you will take on all the unsolved cases from every single squad and commissariat in the region. We have also relieved the archives of any closed cases that still have question marks. They have all been sent to your office.”

Buron gave a satisfied nod to his colleagues, then continued:

“The headline is that the Île-de-France police force’s record for solving cases stands at one hundred percent, and yours will be zero percent. One incompetent squad letting down the whole region. It’s all about containment, you see.”

“Archives will send the boxes over when you start moving in,” Fomenko said, scratching his dragon. “In September, when you’ve been assigned your premises. We’re fuller than a Roman Catholic school at number 36, so we’ll find you a little spot elsewhere.”

“If you think you’ve got off lightly, then you’re wrong,” Valincourt said, still not moving an inch. “You should know that we’re not expecting any results.”

Buron made an expansive gesture toward the door: Capestan’s cue to leave. Despite these less than encouraging final words, she had a smile on her face. At least now she had an objective, and she had a start date.

Decades Later, an Obsession
with a Predator Grows 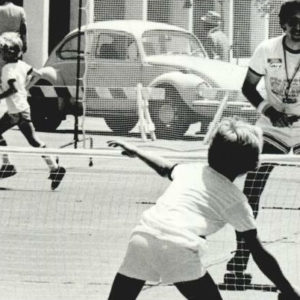 Decades Later, an Obsession
with a Predator Grows It was 2008. I was driving to a college reunion with an old boyfriend, Michael. We were both in our early thirties. He was a poet...
© LitHub
Back to top