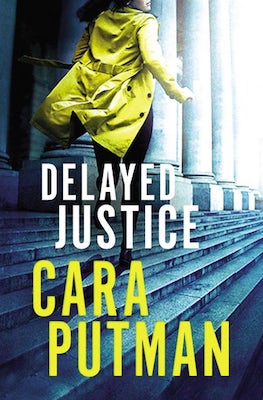 The following is an exclusive excerpt from Delayed Justice,by Cara Putnam. In the following passage, a lawyer out with her friends encounters an extremely unwelcome visitor.

The lights of DC twinkled across the Potomac through Jaime’s window, a view that was worth every extra dollar she paid for it.

The mantra of real estate in a city was location, location, location, and her experience reinforced its importance. She could spend hours a day commuting with thousands of other going-nowhere cars, or pay obscene rent and step on the Metro a block from her home. She chose the latter. From one spot she could watch sunset river cruises along the Potomac, and through another window she could imagine she saw the lights of Capitol Hill. In truth she was a little too far away, but the illusion didn’t hurt anyone.

As she drove from Arlington along the George Washington Parkway and through Old Town, she was filled with churning emotions. What had she set in motion today by meeting with Mitch McDermott? She couldn’t tell from his words as they parted whether she should be hopeful or expect to be disappointed.

She shifted her gaze and noted a few hardy boats cruising the Potomac. Probably romantic dinner cruises, the kind she would never take. Romance was for people who had needs she’d already put to death. A need to be seen. A need to be admired. A need to be cherished.

Jaime’s needs were different. She needed to prove she was as good if not better than every man she worked with. To prove to herself she could stand on her own two feet, independent and strong. To prove she could affect the world around her, in ways big or small.

These needs left her standing a bit outside the world of her friends. A lone star amid the constellation of friendship.

“Snap out of it, Nichols,” she said under her breath. Jaime meant the words to be brusque, but they came out in a whisper in the small space inside her car. The longing for more always surfaced in the moments before she joined her law school friends for their monthly dinners.

Was it too late to create an excuse to stay home? A nice migraine would be perfect about now. Let the medicine knock it out after she un-RSVPed.

Was that even a word? It should be. She sighed and parked her car. It was time to step into the lion’s den of friendship with the women who could see beneath her mask.

As she walked into Il Porto at its prime spot along King Street in Old Town Alexandria, the sound of Caroline Bragg’s laughter told her exactly where her friends had gathered. The cozy table in the corner would be their spot as long as they wanted to linger, since the waitstaff were used to the group’s periodic binges on great Italian food and friendship. The women had made the restaurant their own while in law school, so walking in this door should feel like coming home.

The women had made the restaurant their own while in law school, so walking in this door should feel like coming home.

Though the Italian restaurant was a favorite of the others, Jaime had never bothered to tell them she’d rather eat anything else. The story of her life. It wasn’t their fault she’d be eating bad sandwiches for a week to compensate for the high-priced meal and still make her rent.

She gave a nod to the hostess and headed to the corner, passing tables covered in red-checked or green-checked tablecloths in the white stucco-and- brick-walled room. Her heels echoed against the red tile floor.

She heard Caroline laugh again. The woman carried a certain light everywhere she went. It was maddening. Caroline worked so hard, yet never seemed to get down from the briefs she read day after day in her job at the court.

It only took a glance to spot Hayden McCarthy and Emilie Wesley seated at the table. It was unusual for Hayden to be early—Emilie must have put some pressure on her roommate. Three empty chairs at the table telegraphed that two more would join them besides Jaime—likely their law school mentor, Savannah Daniels, and her new sidekick, Angela Thrasher.

Caroline spotted her and leapt to her feet.

“Girl! You’re here. You know, each time I wonder if you’ll really show up.” She tugged Jaime into a reluctant hug. “Happy birthday!”

“Thanks.” Jaime was relieved to see presents were absent, then paused to note the tight lines around Caroline’s eyes. “You okay?”

Before she could follow up, Emilie stood and pulled out a chair for Jaime. “I already ordered your water with lemon. Happy birthday.”

She leaned closer. “I told them no presents this year.”

“Thank you.” It was hard to explain how uncomfortable gifts made her, even gifts from friends.

Hayden smiled a welcome as Jaime sank onto the empty chair.

Jaime nodded. What else could she say? Blurt out how the last criminal trial had left her wanting to take a continuous shower?

That the constant defense of men and women who had done terrible things weighed on her even as she believed in the importance of what she did? Mention that she’d finally taken the step to hold her uncle accountable? That would raise too many questions.

“I’m good.” Obfuscation was easier than the truth.

Jaime loved these women. They had carried her through classes that didn’t make sense and provided a community when she hadn’t been sure she could endure. Her goal had been twofold: persevere, and find the voice her uncle had robbed her of when she was a child. It was only because of the women at the table that she had survived law school. Finding her voice in the way that mattered most was still to be realized.

“Earth to Jaime.” Hayden’s words pulled her from her circling thoughts.

“Your body is here, but you haven’t heard anything we’ve said.”

“Sorry.” Jaime forced her thoughts to return. “I’m here.” But she looked up to see three concerned sets of eyes studying her.

“Okay.” Hayden glanced at Caroline, who gave the smallest shrug.

The waiter approached with a tray of drinks, and a few minutes later Savannah and Angela bustled in, apologizing for their delay.

“We are finally here, ladies.” Savannah tugged Angela after her to the table, and the conversation paused as the waiter took their orders. When he left with the menus, Savannah started a story about her rescue kitten’s latest antics. “Getting that little thing was the best thing I’ve done in a long time. It’s so nice to have something eager to see me when I arrive at home.” She glanced around the table, her dark, shoulder-length hair arranged in a perfect bob.

“I’m surprised y’all don’t have one. The relaxation I get from her is so worth the cost of cat food and vet visits.”

Caroline jumped in with a story about a cat she’d had as a child, and in no time the conversation moved on to other childhood memories. Jaime stayed silent, smiling and nodding at appropriate times. She didn’t share that she also had a cat, a beautiful orange striped tabby named Simba. It seemed too personal, which only demonstrated how truly broken she was inside. Her friends knew her well enough not to ask her for stories. They gave her the grace to speak only when she wanted to share.

Her phone buzzed in her pocket, and she started. “Sorry.” She pulled it out and glanced at the screen.

Need to see you ASAP. Come straight to my office in a.m.

It was from her boss, Grant Joshua. She frowned as she reread the message, then slid her phone back into her pocket.

“Yeah. Just a meeting in the morning.” Jaime pushed it from her mind. She could worry about it tomorrow.

The hostess walked past, followed by two thirtysomething men, whom she seated several tables away.

Jaime pulled her gaze back to the table. Savannah turned to Hayden and elbowed her colleague. “I think we need to order Jaime something a little stronger than water.”

Caroline piped up. “One sickeningly sweet tea, coming up.”

“No, really.” Jaime’s protest was cut short by Caroline’s laugh.

“I know you, girlfriend.”

Emilie shook her head as Caroline headed to the bar. “The rest of us would flag down the waiter, but Caroline has to fix it herself.”

“She’d mother us to death if we let her.” Hayden’s concerned gaze followed Caroline. “That’s why we have to help her.”

“Help her with what?” Jaime asked.

“I told you she wasn’t listening.” Emilie tapped Hayden’s arm with a triumphant smile.

Her words froze in her throat at the sound she would recognize anywhere—her uncle’s laughter echoing through the room.

“She was distracted by the guy who walked past a minute ago—the one who looks like Hawkeye.” Savannah winked.

Jaime had to laugh. “Just because I like the Marvel movies . . .”

“Ah, but if Hawkeye ever gets his own movie, you’ll be first in line.”

“There is something about a superhero who’s all about justice and freedom . . .”

Hayden nodded, but her fingers beat a staccato rhythm against the red-and-white checked tablecloth. “We still have to create a solution for Caroline.”

“She can have the couch in the basement.” Emilie shrugged. “I can make room.”

“She won’t go for that,” Hayden said. “She won’t want to be an ‘inconvenience.’”

Caroline came back to the table carrying a slightly sweaty glass of watered-down tea. She set it in front of Jaime. “Here you go.”

Jaime picked it up and took a hesitant sip, then smiled. “An Arnold Palmer.”

“I told you I know you.” Caroline’s calm words settled over Jaime like a comforting mantle.

“Thanks. So what is it you need help with?” Each time they gathered, somebody needed something. In law school it had been answers to legal theories. Jaime used to think those were complicated issues—now she wished that was as difficult as life got.

“Caroline needs a place to stay for a week.” Emilie’s direct gaze dared Caroline to contradict her.

“Have you ever lived somewhere while the floors are being refinished?” Hayden raised an eyebrow.

“And it’s not only the dust and then the fumes. Projects like this never go on schedule.” Emilie looked like a sage as she made the declaration. “My family had our entire first floor refinished once. Next time we left town for a month.”

Just then Jaime heard the sound of laughter coming from the entrance. She glanced in that direction and felt the blood drain from her head. She’d read that expression in books and always thought it was such a lame description, but now it was real as she went from fine to woozy in a matter of seconds.

Savannah scooted her chair back, the screech penetrating the growing fog. “Jaime.”

Jaime couldn’t answer. Her words froze in her throat at the sound she would recognize anywhere—her uncle’s laughter echoing through the room. In one moment, she was back at his apartment.

She was paralyzed as he came closer.

And there was nothing she could do. 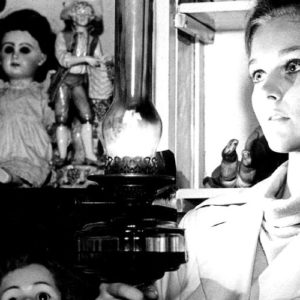 How I Learned to Stop Worrying About Crime Fiction and Love It as Horror There’s a certain amount of crossover between horror and mystery—they both celebrate what other genres abhor, and both...
© LitHub
Back to top