There’s a certain amount of crossover between horror and mystery—they both celebrate what other genres abhor, and both are judged partially on their ability to inspire disgust, fear, and other negative emotions. One can divide mysteries into several categories based on probability of occurrences—rarely happens, might happen, and definitely happening somewhere. Crossover with horror occurs in the “rarely happens” and “might happen” categories. A murder by a serial killer, a kidnapped privileged child, elaborate manipulation, devious revenge, and sadistic torture by home invaders are all…unlikely to occur, at least to the reader, anyway. Murder in the family and stolen identities at any level of income, or vulnerability to early death or suffering in the context of poverty? Much more likely venues for suffering, and less likely for crossovers to horror—horror is the genre of our darkest fears, not the genre of our reality.

I used to find serial killer and home invasion novels extremely problematic; they seemed like safe spaces for white middle class fears. I dismissed them as ways for readers to view themselves as potential victims, often of a racialized other, and to allow themselves to forgo their earthly social responsibilities in lieu of delighting in fictional fears. If one spends all one’s time in a fiction-induced coma of victimhood or righteousness, it does seem to make it easier to ignore ways in which many of us are perpetrators and participants in the daily violence of inequality and injustice. I wanted my crime fiction the same way I wanted my history and current events—socially engaged and giving the reader no quarter.

As I’ve developed a love for horror, science fiction, and the “new weird” of China Mieville and Jeff Vandemeer, I’ve come to reconsider my former position. Fred Vargas stated once in an interview that she thinks of crime fiction as modern day fairy tales—mysteries are ways to safely experience and digest the horrors of everyday life, ballooned to extreme proportions, that we may sleep at night and convince ourselves to not fear the world around us for just a few hours. Yet this attitude applies more to the use of modern fairy tales for comfort than their original purpose as cautionary tales.

The harsh yarns of cannibals and tricksters, early marriage and castaway children, all allow us to process the arbitrary suffering caused by nature and humanity.

The harsh yarns of cannibals and tricksters, early marriage and castaway children, all allow us to process the arbitrary suffering caused by nature and humanity. According to the folklorists of the 1970s and 80s (the seminal essay collection The Great Cat Massacre is a great place to start your research) early fairy tales had a teaching component, and were sanitized in collections for the wealthy and comfortable. There’s a stark difference between folktale collections from the 19th century onwards and the first dark tales of the forest set down in the 17th and 18th century. Like a Roald Dahl book, most fairy tales start with plausible suffering that gives way to pleasurable fantasy—but the suffering is not, itself, meant to imply horror or fantasy.

Horror mirrors this same fairytale transition, going from descriptions of realistic fears and attempts to explain the unexplainable, to tales grounded in the comfort of the reader and the excess of entertainment pushed to extremes. Science fiction and crime fiction have taken up the mantle of moralizing, placing present day fears in near-future contexts, imposing present day utopian imaginings onto fantastical depictions of the past, or attempting to make sense of the violent extremes those who are vulnerable frequently suffer. In a way, scifi, fantasy and crime fiction have efficiently divided the hallmarks of fairytales—extreme fear to horror, excessive consumption and hierarchy to fantasy, and tricksters and arbitrary death to crime fiction.

Serial killer novels were the first that I chose to characterize as horror. The Snowman, by Jo Nesbo, can either be a highly implausible crime novel with an unlikely villain (and behavior by Harry Hole that in real life would place him next to the Harvey Weinsteins of the world), or it can be a horror novel, taking primal fears of blood, snow, and betrayal, and placing them in a modern context with a horror-movie villainess. An article I frequently reference, “On Dead Women and Crime Fiction” by Åsa Larsson, explores the genre as the modern pulpit for those who don’t care about religion. To draw a logical conclusion from the article, in an era of police procedurals where each detective is more grizzled, divorced and beer-sodden than the last, the detective represents the sinful, universal us who can only define ourselves as good through comparing ourselves to that which is otherworldly and clearly evil—in Christianity, the devil; in history, the Nazis; in crime fiction, the serial killer.

Home invasion novels, too, become less problematic when viewed as horror—an unlikely fear of a stranger in our home, fodder for bland suburban racism and the home security system industry, becomes less the stuff of reinforced stereotypes when one views it as the horror of the outside coming in. In a history of Russia titled The Icon and the Axe, author James H. Billington talks of the three horrors of early Russian folk tales as the horrors of life in the forest—howling wolves, raging fire, and burrowing insects, all invaders to a home with unstable boundaries between outside and inside. Anne McClintock’s Imperial Leather: Race, Gender, and Sexuality in the Colonial Context, a history of late-19th century Victorian imagery and society, picks apart the Victorian fetish for eternally shining shoes. As the the only part of the outfit to come in contact with outside and inside, they must be continuously cleaned to distinguish the genteel indoors from the filth of the outside. In an era where homes are thought of as castles, and vampire novels, with their vampirical home invaders, finally subsiding from a peak in literary popularity, it’s easy to cast fears of break-ins, assaults, robberies, and the like as a modern-day incarnation of centuries of growing comfort indoors and subsequently increased fears of the outside.

Missing children novels, like home invasion and serial killer stories, represent another example of stories that are problematic as representations of ordinary suffering, yet make sense as representing our greatest fears. I don’t have children, but if the amount of times I’ve dreamed of my cat running away is any guidance, parents must be very, very, afraid of their children disappearing. Those who believe in themselves as good parents are not as afraid of their children running away as they are of their children being abducted. A kidnapped child is both an understandable fear, no matter the likelihood, and a twisted, self-serving confirmation that one’s child is, in fact, the most precious child on earth.

While some horror/mystery crossovers make sense from a perspective of similar attitudes and subject matter, others appear as strange bedfellows, to delight and confound us in their bizarre combinations. There’s an entire sub-genre just of works featuring Sherlock Holmes and Cthulu—there’s something irresistible about combining a figure of the utmost logic with a creature who defies logic. With crime fiction, there’s always a need for why—a book can be easily dismissed because it doesn’t explain character’s motivation, while in horror, that…thing…that creeps up the walls has no motivation, and that’s okay. I mean, it definitely wants to kill us, and may want to eat us, but we don’t really need to know why. Whereas if a cannibalistic serial killer shows up in a crime novel, and I read it as a crime novel, he damn well better have a reason to eat people. One of the nice things about Silence of the Lambs is the plausible backstory of Hannibal Lector—a childhood in Soviet-controlled Ukraine during famine, leading to a life of cannibalism? Hey, not the path I’d take but it sure does make sense!

Horror excels at allegorization of our internal dialogue—that voice that tells you terrible things, late at night, can easily be recast as a monster…

Horror is, of course, a substantial ouevre, and I’ve barely scratched the surface. As in crime fiction and scifi, there’s plenty of horror concerned with social responsibility. Horror excels at allegorization of our internal dialogue—that voice that tells you terrible things, late at night, can easily be recast as a monster, and that’s the brilliance of the Babadook. Horror can teach us to not fear the physically monstrous, as in the delicate love story of Let the Right One In, or horror can represent the harsh realities of oppression, difficult to articulate sometimes in everyday microaggressions, but perfect for the symbolic subtlety of such films as Get Out. Horror was once explained to me as the only genre that glories in female dysfunctionality. If Jane Eyre was written as horror, the madwoman wouldn’t be in the attic—she’d be the star of the show.

I know it may seem rather arbitrary to say that serial killer novels, or any other genre I’ve mentioned here, offend me as crime fiction, but entertain me as horror. I’m perhaps overly concerned with the idea of responsibility in fiction, although it is true that the stories we consume, alongside our personal experience, influence how we see the world around us. To build off of Plato’s parable of the cave, if we only read stories about serial killers, then emerge into a world full of ordinary murderers, we can be forgiven for thinking that all killers are the most extreme versions of a murderer. However, if we understand that people kill for all kinds of reasons and in all different circumstances, we can be judged for choosing to learn only about serial killers. On the other hand, if we only read books about serial killers, but frame that as a conscious choice to scare ourselves (while in no way influencing our knowledge of the world of killers at large) than we are in a gray zone where we have handed off our need to understand the world to a different part of our consumption. 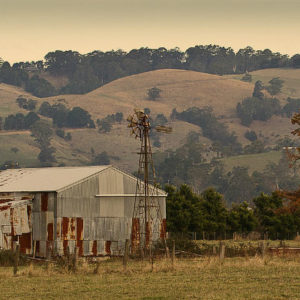 Australian country towns are often poor, isolated and drought-stricken. Even the prosperous ones, gifted by climate and industry,...
© LitHub
Back to top