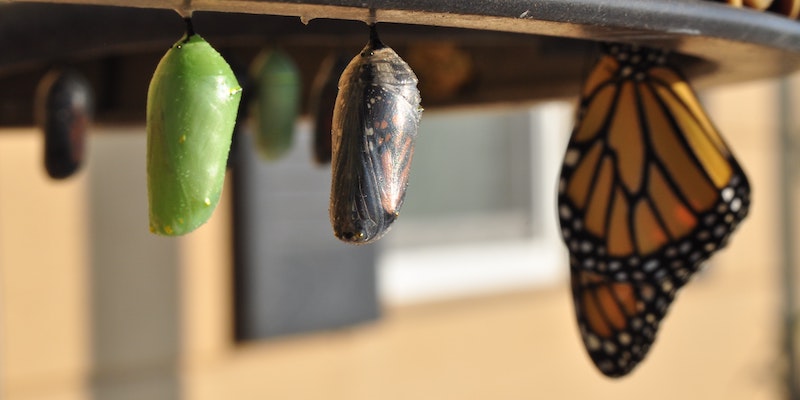 "The goal of a character’s transformation is that it feels natural, satisfying, and deserved."

I was going to title this essay ‘Dragons, Butterflies, and Professional Wrestlers’, but then I realized that you’re not here for a college essay that deconstructs Thomas Harris’s use of William Blake’s art as a tool for metamorphosis. You’re here for the down and dirty on pumping up your story via character arc. Therefore, let us continue as we have begun: with your book’s metaphorical rump.

When you alight on a story idea, it’s generally either in the form of a character, a setting, or a hook. Whichever one comes first, your job is to create a perfectly balanced triangle in which your story could only happen to this particular character in a setting that uniquely challenges them. Once you’ve nailed down this foundation and you’ve begun to get a feel for the book overall, it can help to decide how the story will end. Even if you’re a pantser and have lots of scenes, details, and characters to discover along the way, most writers have a better chance of reaching the finish line if they know where to aim. For me, a big part of determining my story’s climax and ending is figuring out how the character will change from the beginning of the book to the final page.

In some stories, a character’s transformation is overt and visible. Francis Dolarhyde seeks to transform into the Red Dragon and gets a full-body tattoo—and kills several people—as part of his process. The Gardener of The Butterfly Garden kidnaps young women, tattoos them with butterfly wings, and holds them hostage in a beautiful garden. In A Simple Favor, Stephanie subsumes her dead friend’s life, cozying up to her husband, living in her home, and taking on the role of mother to her child. Physical transformation is, as they say in Beauty and the Beast, a tale as old as time.

But for other characters, their arc is internal. In The House of Brides, Miranda pretends to be a nanny so that she can meet her secretive family, and only once she has accepted her role in a history of liars can she claim her true heritage. In Little Threats, Kennedy has spent half her life in prison and must now learn how to live in the real world—and discover what happened when her best friend Haley was killed. And in Gone girl, of course, Amy goes from a cool girl with a cheating husband to an absolute psychopath who holds the reins of her marriage.

If a protagonist is the exact same at the beginning and the end of a story and they’ve learned nothing, the book is generally not satisfying for the reader—or the writer. We all want to see failure and triumph. We all want to know that change for the better is possible, that all this pain isn’t for nothing. That’s what I call ‘making the face match the ass’— there’s a symmetry to the beginning of your book and the ending.

When I was writing The Violence, I wanted to begin with a character we’re all familiar with—The Woman Who Has It All. A handsome, successful husband. Beautiful children. A magazine-cover home. And then I wanted to rip her world apart until there was nothing left, until she had to rebuild herself from scraps. Like Chelsea and her teen daughter Ella, I also suffered under an abusive, narcissistic alcoholic, and I know what it feels like to live with someone who tears you down until you think you’re worthless and have no resources. It was easy enough, starting a book in a place so familiar. The hard part was deciding who these women would become, how they would choose their own transformations when the chips were stacked against them. The answer, for one of them, is professional wrestling.

So, how do you give your character a satisfying transformation?

1. Give them a real flaw or fear. Not, ‘she’s so clumsy except when she’s not a ballerina/assassin’. When I first started writing novels, I was afraid of making my characters too flawed, but the harder you make their life, the more room they have to grow. Imperfection is real and much more sympathetic and believable than a cardboard cut-out with no real problems. In the beginning of The Violence, Chelsea is powerless, trapped without resources, skills, or friends, living with an abusive husband. She has forgotten how to fight back.

2. If a flaw or fear doesn’t immediately come to mind, start with the ass. If you know how you want the book to end, you can reverse engineer your character’s flaw or fear. For example, if you know in the end they will run into a burning barn to save someone, give them a backstory that includes a catastrophic fear of fire. If you know that in the climax, they have to speak up and tell the truth about a long-kept secret, start with them holding their tongue in an important meeting with their boss. I knew Chelsea’s story would end with a victory, so I started out by taking away her agency and power and seeing how far she would go to survive once a pandemic of animalistic violence allowed her to finally escape her husband.

3. Force an early failure. Once you know the flaw or fear that your character’s growth will center on, make sure that in the first half of the book, they will experience a huge failure or disappointment because of that fear. The character who is terrified of fire will have a panic attack and breakdown at their first hibachi restaurant. The character who can’t speak the truth will lose out on a great relationship because they’re too afraid to be honest about their feelings. For Chelsea, her early failure is losing her children because she’s too scared to fight back—the worst possible thing she can imagine.

4. Give them some help along the way. Characters—and real people—rarely accomplish transformation in a vacuum. On their journey, they’ll encounter influences good and bad. Whether it’s a trusted best friend who just has to tell the truth, an uneasy truce with an enemy who doesn’t care enough to lie, a prophetic dream, a loving grandmother, or even a beloved dog, give your protagonist some source of help, reflection, and insight. Let little epiphanies happen, let words of advice make sense at just the right moment. For Chelsea, help comes in the form of her neighbor Jeannie and, later, a counselor turned wrestling coach. I never thought I’d break down a character in a fairground agricultural hall in central Florida, but she needed the tough love.

5. Let them start to make some progress—and then push them back down the hill. It’s so exciting when a character is juuuuust starting to see the truth and make that leap… and then something terrible happens and they sink back into self-doubt or even briefly give up. Caterpillars have to turn to complete mush before they become butterflies, and so does your protagonist, if you want the transformation to feel earned. Chelsea escapes her husband… but loses her kids. She goes out to get a job as a pro wrestler… and loses a friend. She starts to gain a foothold in that job… but then she gets in trouble with her boss. Two steps forward, one step back. Growth is a jagged line.

6. Pump up that climax. So you’ve spent your entire book shepherding your protagonist along, taking them from flawed and fearful to strong and brave—or at least stronger and braver. Now you have to design a climax that crystalizes that transformation in the most dramatic and satisfying way possible. As they face off with the antagonist, it shouldn’t be a sure bet—there is always a moment of doubt, a punch that puts them on the ground, an admission that sends them reeling. But then they reach deep inside, twist the key you’ve carefully planted, and push back with renewed strength and understanding. Once you’ve crafted the scene, make sure you pump up the emotion in subsequent drafts, using all of the physical senses and the protagonist’s words, actions, and internal monologue to really underline the change they’ve gone through. This is their moment to shine, their ascension, the most intense moment in the book. I’m not going to tell you what happens to Chelsea at the climax of The Violence, but I can tell you it involves a pink Caboodle.

7. Bring it home in the aftermath. The climax is the most important moment, but what comes after that is important, too. As the adrenaline fades away, you must craft the next steps for your character. What will they do with their new abilities and understanding? How have their goals changed from the beginning of the book? Where will they go from here? This is a great place to make the ass match the face. Remember that scene at the beginning that really exposed their flaw or fear? Here is where it comes full circle. The character who was deathly afraid of fire has run into the burning building to save someone—and survived. Maybe it ends as they finally introduce their kid to s’mores. The character who couldn’t speak the truth runs into their ex in the coffee shop and finally finds the guts to speak their truth. The question asked at the beginning of the book is answered, leaving the character in a moment of understanding and, often, happiness. The Violence is set in Florida, so there was only one place the characters could end up—the Happiest Place on Earth. Not only has Chelsea reclaimed her power and found her calling and freedom, but she’s able to make life better for her children. She is finally, literally, driving the bus.

The goal of a character’s transformation is that it feels natural, satisfying, and deserved. There’s a gratifying symmetry to the arc that just feels exactly right. Whether the Red Dragon, like his idol, is thrown down, or the Butterflies escape their garden, or a powerless suburban mom becomes a pro wrestling star, there is a sense of completion and balance—one that real life rarely actually provides. Nail that transformation from beginning to end, face to ass, and your readers should feel it like a kick in the rump. 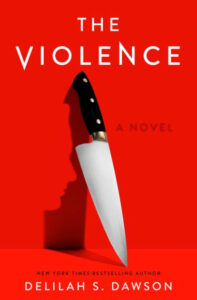 Delilah S. Dawson is the author of Hit, Servants of the Storm, Strike, the Blud series, Star Wars novels and short stories, a variety of short stories, comics, and essays, and the Shadow series as Lila Bowen. She lives in Georgia with her family and a fat mutt named Merle. Find her online at WhimsyDark.com. her new book, The Violence, is now available. 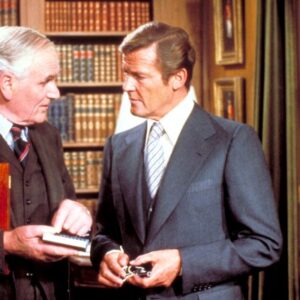 Located just outside a quaint British village in North Buckinghamshire is a mysterious country estate concealed by a wall...
© LitHub
Back to top