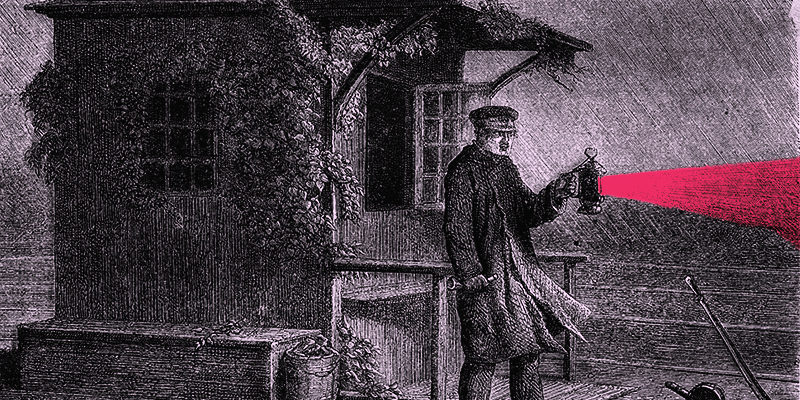 On the book’s front cover, a white-shrouded figure with hollow eye sockets menaces from beneath a gothic arch. On the back, a hooded shape retreats into a snowy landscape. Both unsettling images are surrounded by a darkly cross-hatched sky. Both are imagined as reflections in oval mirrors whose frames seem to be trimmed by patterns resembling heavily lidded eyes—all in keeping with the book’s title, The Haunted Looking Glass. This volume, published in 1959, was my first introduction to the matchless Edward Gorey and to many of the classic ghost stories found within that he had chosen.

One of best of these stories, to my mind, is “The Signalman” by Charles Dickens. While I was drafting my own mystery story, Funeral Train, (October 2022, Akashic Books) that involves a train wreck, a faulty signal and homicide, I consulted Dickens’ story. Later I learned that the author himself had survived a train wreck, which almost certainly inspired him to write “The Signalman.”

The story opens when an unnamed traveler, upon spying a railroad worker on the tracks below, leans over a steeply graded stone embankment to call out to the man. “Halloa! Below there!” The signalman, rather than looking upward as the traveler expects, peers at the stretch of rails in front of him. This is the first of many signals, in the traveler’s way of thinking, that the worker is disoriented or perhaps has “an infection in his mind.”

The traveler climbs down a precipitous path to the tracks. In Gorey’s illustration, a murky tunnel looms at the center of the page. Massive rock walls rise on either side. The silhouetted figures of the traveler, standing atop a rocky outcropping, and the signalman below, are dwarfed by these immense formations.

The two men greet one another and eventually retire to the signal box—a small building housing a desk, coal stove, and a telegraph apparatus. They converse about the signalman’s job, which is to manage the safe movements of passing trains and ensure there are no accidents or collisions. As they talk, the signalman twice stands abruptly and nervously peers at the tunnel as if he has heard a warning bell. But no bell has rung.

The next evening the two are again settled in the signal box when the signalman reveals the source of his unease. He confesses that he has twice observed a spectre outside the tunnel. The first time the ghostly presence cried out “Halloa! Below there!” just as the traveler had, and not six hours later a passing train was wrecked, killing and injuring many passengers. The second time heralded the death of a beautiful female passenger which the signalman witnessed in one of the coaches as it passed.

The reader now remembers the signalman’s panicked glances at the tunnel entrance during the pair’s first meeting. Will there be a third tragedy, we wonder. And, in fact, the story ends with the echoes of previous warnings: “Below there! Look out! Look out!” But this time the words come not from a spectre but from the locomotive engineer who spots the signalman standing on the rails the end of the tunnel as the train thunders toward him. It is too late to stop. As the shaken engineer explains to the traveler, who has arrived at the scene, he blew the whistle and when the signalman did not move aside, he called out the fateful words moments before the locomotive cut the man down.

By 1866, when Dickens wrote this story, fatalities and injuries as a result of train accidents were occurring at an accelerated rate in both Britain and the United States. Trains moved faster, carried more passengers and were heavier than their progenitors of the 1830s. When wrecks occurred, the number of casualties was high. Many passengers of this era were justifiably cautious about train travel—including Dickens. Still, he rode the rails frequently; crisscrossing the United Kingdom and United States giving readings.

And then, on June 9, 1865, the train Dickens himself was riding in crashed—adding ten more passengers killed to the year’s grim tally of railroad fatalities.

Dickens had started his journey that morning in France where he boarded a steamer to cross the channel. Because the channel is subject to tidal currents, the steamer’s arrival times varied daily. For example, on June 9, the ship’s crossing was scheduled two hours earlier than on June 10, to accommodate the tides. This, in turn, affected the schedule of the train waiting at the port of Folkstone to carry passengers inland toward Staplehurst and eventually London. For these reasons, it was considered a tidal train. In this case, Dickens’ train never made it beyond Staplehurst.

In Dickens and Staplehurst: A Biography of a Rail Crash (Olympia Publishers, 2021) Dickens’ great-great grandson, Gerald Dickens, describes the disaster and subsequent inquest. After crossing the channel and catching the train, Dickens was 45-minutes into the last leg of his journey. The train approached Stapleton at a clip of fifty miles-per-hour. Unknown to Dickens his fellow passengers, and to the entire train crew, rotting timbers in a low overpass over the shallow Beult River were being replaced—leaving a 42-foot gap in the bridge.

Suddenly, the train emitted two loud whistles and within moments the brakes were applied. Dickens and his traveling companions were flung into the corner of their compartment. The locomotive had jumped the gap, bringing several cars with it to the other side. Dickens’ first-class carriage, third in line, was left hanging over the river embankment. Other coaches fell directly into the river; many crashing onto their roofs and sides and breaking apart.

As Gerald Dickens notes, no one in his great-great grandfather’s carriage was seriously injured although they were shaking with fright. Dickens himself remained calm and once securing the companions’ safety hurriedly returned to the carriage for his brandy flask to administer aid.

In a letter one week later, Dickens described the scene to his friend, Thomas Mitton.

“…I took off my travelling hat for a basin, climbed down the brickwork and filled my hat with water.

“Suddenly I came upon a staggering man covered with blood and such a frightful cut across the skull that I couldn’t bear to look at him.”

After washing the man’s face, helping him sip some brandy and lying him on the grass  Dickens wrote that the man said, “‘I am gone’ and died afterwards.”

For the next two hours, Dickens, other surviving passengers and the train crew nursed the dead and dying. Many of the dead had been crushed or died of suffocation in the mud. Throughout the ordeal Dickens was calm, however the experience traumatized him for months and years afterwards.

Four days after the crash, an inquest was held. The wreck was caused by a number of missteps.

The trouble began when Henry Benge, the rail foreman overseeing the work on the viaduct. He misread the train’s timetable, mistakenly thinking the train would pass the worksite at 5:20 p.m.—which would have been the case on June 10. But not on June 9. On June 9 the train was due at 3:15 p.m.

Another error, Gerald Dickens says, was made by the work crew’s signalman, John Wiles. For the job, which was similar to today’s flagman on a road construction crew, Wiles was to stand 1,000 yards up the line from the worksite so as to warn approaching trains. Unfortunately, as Gerald Dickens states, “…Wiles decided to judge the 1,000 yards distance by counting telegraph poles which he guessed to be about 100 yards apart.” They were not. He took a position only 544 yards from the overpass which was not be enough distance for a train at full speed to come to a complete stop.

Another standard warning sign also failed. Regulations required the signalman to plant five explosive charges in advance of a breach. “These charges would detonate as a train passed, thereby sending an audible warning to the driver and guards that there was danger ahead,” Gerald Dickens states. No explosives were placed.

As a result of the inquest, Benge was charged with manslaughter. He served six months in prison and, upon release, worked as a farm laborer. Eventually Benge was admitted to the Kent County Lunatic Asylum and died there. It is speculated that the weight of his role in the disaster caused his mental deterioration.

After learning about the Staplehurst crash, I again re-read “The Signal Man,” paying close attention to the locomotive engineer at the end of the story who describes the catastrophe to the traveler.

“Ah! It was a dreadful time, sir. I never left of calling to him. I put my arm before my eyes, not to see, and I waved this arm to the last; but it was not use.”

The haunting power of remorse terrorizes both the signalman and the engineer. Remorse eats away until the bearer crumbles under the weight.

And that is worthy of exploration in any mystery story. 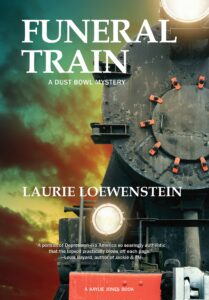 Originally from western Ohio, Laurie Loewenstein is a writer and teaches fiction for the Maslow Family Graduate Creative Writing Program of Wilkes University. Funeral Train is the second in her mystery series set in the Dust Bowl, and follows her acclaimed Death of a Rainmaker. She has lived in Pennsylvania, New York, Maryland and now South Carolina, but is a Midwesterner at heart. 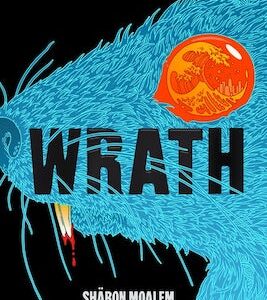 Sienna and Prez arrive together in the Astro van outside EditedPets’s 6th Avenue building. It is Saturday, December 24, 5:57...
© LitHub
Back to top