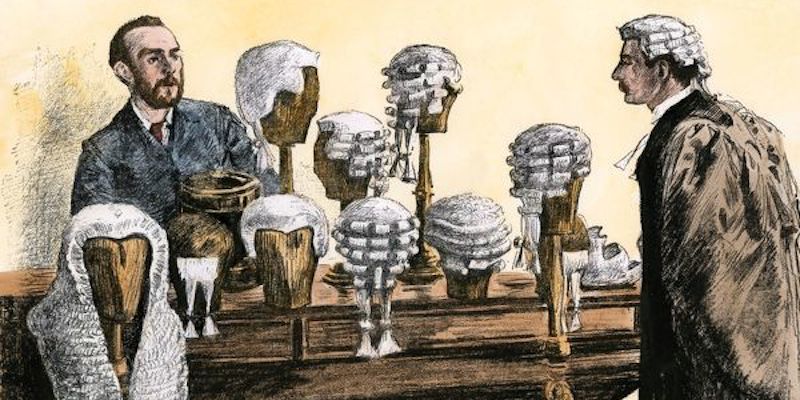 From Wilkie Collins to John Grisham to Lisa Scottoline, a look at the evolution of a singular genre.

What do you call twenty-five skydiving lawyers? SKEET! If you haven’t heard this one, I bet you’ve heard another or have a good lawyer joke that you love to tell. Have you heard the one about the lawyer that… the list is endless, and no one loves to tell lawyer jokes more than lawyers!

Before I began writing legal thrillers, I asked myself why we love the law and what brought about our fascination with lawyers, civil conflict stories, and those involving people in trouble with authority. I went in search of the origins of the genre and found a rich history of chills and thrills. I also discovered something particularly interesting about how people view lawyers through the evolution of these stories and through the lens of their personal forays into courtroom drama.

What is a Legal Thriller?

John Grisham, the most well-known attorney writing in the genre, says: “You throw an innocent person in there, get ‘em caught up in a conspiracy and you get ‘em out.”

I think we must include a bit of education about the law and its procedures, possibly a courtroom scene, and that about sums up the legal thriller. The history behind the evolution would take a book or two to recount. Here are the highlights.

As with all other genres, legal thrillers evolved. Modern readers are most likely to think this explosion of the genre is a recent phenomenon, but before Turow, there was a history of lesser-known lawyer-writers. The predecessors were attorneys who collected true crime, case law, and trial stories of eighteenth-century Europe, all providing the foundation of the genre today.

As early as the mid-1500’s, scandalous trials were the focus of many printed stories and theatrical performances. The legal thriller took a giant step in evolution when a French lawyer, Francois Richer, wrote in the preface to Causes Celebres: “I have taken care to arrange the material in such a way that the reader cannot spot at once how a case will end and what verdict will be pronounced. He remains in a state of uncertainty during the development of the action, and in that way, I believe each case will become more gripping. The reader will remain curious up to the final page.” Adding this suspense element, Richer created the template for the genre in its modern form.

Crime fiction culminated in one seminal work in 1841 with the publication in Graham’s Magazine of “The Murders in the Rue Morgue,” Edgar Allen Poe’s classic murder mystery with a detective. Logical reasoning provided the solution to the problem and is the central theme of the story, rather than character or description. As the detective gathers pieces of evidence throughout the story, the reader can also deduce the solution. Following Poe, sensational mystery stories appeared in all forms of print. Attorney Abraham Lincoln, a great admirer of Poe, wrote a news story in 1846 entitled “The Trailor Murder Mystery” based on a case he defended in Illinois.

The Genre is Born

When Wilkie Collins’ books, The Woman in White and The Moonstone were published, they were more popular than a new Grisham novel in his heyday. Collins was a friend and student of Charles Dickens who was also experimenting with legal thrillers at the time. Collins was the first to bring together the innocent person, a conspiracy, suspense, the detective, the legal system—in short, the quintessential legal thriller.

Anna Katherine Green, known as the mother of the American mystery novel, was the daughter of a famous criminal defense attorney. Her first book, The Leavenworth Case, 1878, was America’s first bestseller. Its overly dramatic method is almost comical today, but she was the first to introduce several plot devices such as the rich man murdered just before he changes his will, the hero lawyer who falls in love with his client, use of forensic evidence, the body found in the library, and others.

During the early 20th century, one of the most well-known and commercially successful American lawyer/authors was Melville Davisson Post. His plots were simple and rapidly paced, leading to the pulps of the 1930’s. His characters were lawyer/detectives, the first being Randolph Mason of Corpus Delicti. Mason is a calm, collected, intelligent lawyer who advises his clients on how to avoid prosecution by using loopholes even advising a client to commit murder and then defending him afterward.

In the 1930’s and ’40’s Erle Stanley Gardner, the creator of Perry Mason, was one of the best-selling authors of all time who built a reputation as a champion of the underdog. He wrote after practicing law all day, churning out about 4,000 words every night to earn additional income. In 1921 he sold his first mystery story to a pulp magazine, followed by hundreds more. He wrote in the hard-boiled, slangy, pulp style, using fast paced action, not characterization.

After several rejections, Gardner’s first novel, The Case of the Velvet Claws, was published by Thayer Hobson, president of William Morrow & Co., who suggested that the author write Mason as a series character. Eighty-one Perry Mason mysteries followed. According to critic Dennis Bounds, the formula for every Mason novel can be put into a single premise: “What if an innocent man or woman, who has every reason in the world to commit a murder, has little more than a flimsy alibi to prove to the police that he or she did not, is implicated and arrested for that murder, and gets attorney Perry Mason to defend him or her…?” Taking these elements as a springboard, the plot continues in a trajectory toward the climactic moment—usually at a trial—where the actual murderer is revealed.

About the time of Mason, many legal thrillers were born. Cornelius Grafton, the father of best-selling author Sue Grafton, used pre-WWII Kentucky as a setting for multi-faceted plots, procedural maneuvers, and a fast pace with attention to detail.

In the 1950’s and ’60’s, outselling all legal thrillers was the first of the truly realistic American courtroom dramas, Anatomy of a Murder. It was written in 1958 by Michigan Supreme Court Justice, John D. Voelker publishing as Robert Traver. He pitted a small-town hero against a hired-gun prosecutor in the trial of an unlikeable man, who may have defended his wife’s honor with murder. Travers raised the bar on legal thrillers with his attention to correct legal procedure and a memorable finale. In 1960, To Kill a Mockingbird by Harper Lee was published onto its own iconic bookshelf.

In 1987, Scott Turow’s Presumed Innocent skyrocketed the legal thriller market. George Higgins, a former district attorney in Boston, wrote The Friends of Eddie Coyle, 1972, made popular by the Robert Mitchum movie. And, of course, the mighty John Grisham took the genre to a whole new level of popularity in the 1990’s with “The” novels and movies: The Firm, The Client, The Chamber, etc., then circled back in popularity for attention to his first novel, A Time to Kill.

Today, Grisham continues to lead the pack along with Michael Connelly and his Mickey Haller series followed by Diane Capri, John Ellsworth, Mark Pryor, Lisa Scottoline, Alafair Burke, Kenneth Eade, William Landay, Robin James, Robert Dugoni, Marcia Clark, Larry A. Winters—the list goes on and on—suggesting that it’s a lot more interesting to write about the law than to practice it. A look back in a few years will show how the genre has further evolved as these new writers place their stamp on the legal thriller.

How Lawyers are Viewed Today

As these stories have progressed over time, the view of the attorney in society has gone through an evolution as well. At the time of Atticus Finch, Perry Mason, and before, attorneys were respected and often revered as pillars of society. Now, views of attorneys and their roles in society span a wide range as reflected in the genre today. Steve Martini, and those like him, write about lawyers who lose sleep over their client’s problems and argue in heroic fashion before captivated juries. George V. Higgins, and others, portray a gritty street lawyer in their legal thrillers who stay out of jail only one step ahead of their clients.

Lawyers seem to be divided into a schizophrenic split of good guys and bad guys depending on the reader and their experience of the law in real life. One thing is for sure, everyone knows at least one good lawyer joke, and no one calls for their mommy when they’re in big trouble—they call their lawyer.

*Thanks to Marlyn Robinson (1947-2014), Law Librarian at the University of Texas School of Law, for some of the references used above, and for her creation of the legal novel section in the stacks of the Tarlton Law Library. 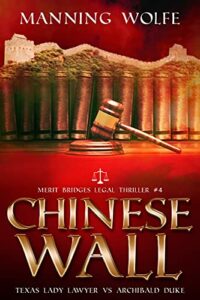 Manning Wolfe, an award-winning author and attorney residing in Austin, Texas, writes cinematic-style, fast-paced crime fiction. Her legal thriller series features Austin Lawyer, Merit Bridges. Manning is co-author of the popular Bullet Books Speed Reads, a series of crime fiction books for readers on the go. As a graduate of Rice University and the University of Texas School of Law, Manning’s experience has given her a voyeur’s peek into some shady characters’ lives and a front row seat to watch the good people who stand against them. www.bulletbooksspeedreads.com www.starpathbooks.com
http://www.manningwolfe.com%20 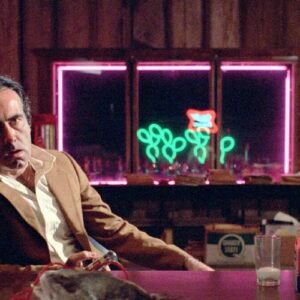