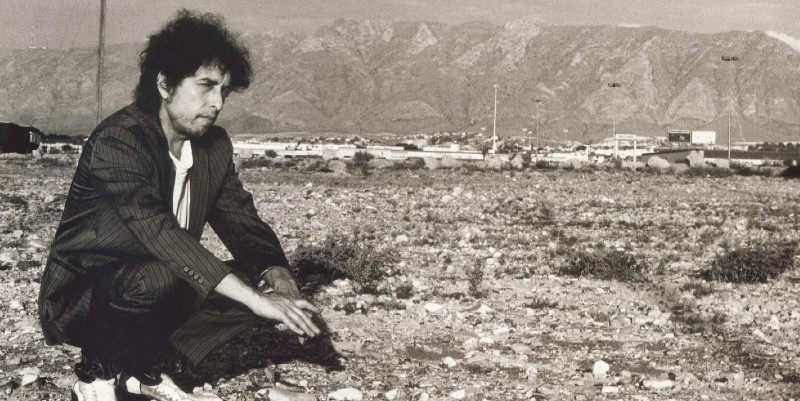 For fifty years, Bob Dylan has been writing about the end of the world. What does he want us to know about it?

He named his first album after himself: Bob Dylan. Yet only two of the eleven tracks were written by the eventual Nobel Prize winner: “Talkin’ New York” and “Song to Woody.”

Bob Dylan wrote love songs and protest songs and obscure dreamscapes, but nearly every album also has a song about the end of the world. Sometimes the songs, like “A Hard Rain’s Gonna Fall,” seem to presage nuclear war, other songs (“High Water” and “Everything’s Broken”) are about environmental or economic destruction, but “Song to Woody” sets the tone for the rest of Dylan’s apocalyptic oeuvre.

Dylan was all of twenty years old when he recorded “Song to Woody” in just one take.

In 1961, the Civil Rights movement was finally gaining traction, young people were making their voices heard, the President was youthful, modern, and had promised a trip to the moon. But the segregationists were still digging in their heels, the Cold War continued ratcheting up towards inevitable conflict, and all that youthful energy was already degrading into mass-market commercialism. At the start of the 1960s, Dylan was telling us we could watch everything die or we could finally be born.

But his second album, the jauntily titled The Freewheeling Bob Dylan, doesn’t hold out even that sliver of optimism. Freewheeling contains three end-of-the-world songs: “A Hard Rain’s A Gonna Fall,” “Talking World War III Blues,” and “Masters of War.”

“Talking World War III Blues” is Dylan laughing at the absurdity of the end of the world, but the blistering anger of “Hard Rain” and “Masters” are nothing short of the soundtrack to the apocalypse. In these two songs, Dylan is less a protest singer with a guitar and a harmonica, and more a prophet holding a scythe and an hourglass. Just in case you didn’t know our time was running low, Dylan is here to let us know:

If you heard a bushy-haired man on the corner screaming those words you would cross the street and consider crossing yourself—and not because of social distancing.

His third album tells us The Times They Are A-Changing, but he never actually tells us what that means. The title song has become a symbol of hope and resistance, but Dylan doesn’t promise a victory. He promises a fight.

There’s a battle outside
And it is ragin’.
It’ll soon shake your windows
And rattle your walls
For the times they are a-changin’.

Dylan’s always known the whole system could be turned upside down, and he’s spent most of his career cheering that destruction on. The times weren’t just a-changing, they had to change—or the segregationists would tear this country apart while the demagogues provoked a war no one could win.

For most of the sixties (if not still today), Dylan was the living embodiment of youth and change, but it’s important to remember that he hid for the final years of the decade. The world went to Woodstock but Dylan was holed up in a barn with The Band hammering out ditties and dirges that are all, in their own ways, apocalypse songs.

Messy, silly, unfinished, and hurried, The Basement Tapes are pure creative id. Each track is either about intense loneliness and frustration or sounds like it was recorded in the last pub left after the end of the world.

As the sixties peaked and ebbed into Nixon and the sweaty, polyester slog of the seventies, Dylan left the modern world behind and traveled to the past. He invented country rock, hung out with Pat Garrett and Billy Kid, and started dressing like a deranged rodeo clown because if the world was going to fall down around him then he’d go back in time where the modern world couldn’t touch him.

Then, the 1980s saw Dylan do something truly unbelievable. He found God. And not just any God but the righteous, smiting, old-timely God of the Israelites combined with a healthy dose of evangelical doom. This wasn’t some quick flirtation with Christianity. Dylan released three religious albums and went on multiple world tours where he harangued the audience and told them they were all going to hell if they didn’t repent. His apocalyptic warnings turned into ravings, and if the times were changing, this is not how the crowds thought they would go.

If we weren’t going to do anything about Reagan, Wall Street, and a Cold War that had grown even more dangerous, then Dylan was ready to call down the mighty gods to get the job over with.

For the past twenty-five years, Dylan has sung to us about a “World Gone Wrong,” told us “Everything’s Broken,” warned us that the water was high, the levees weren’t going to hold, and “Beyond Here Lies Nothing.” Maybe even more chilling, for the past ten years he’s given up on warning us and has retreated to covers of standards and show tunes. If we weren’t listening, then why should he keep talking?

Dylan’s been writing about the end of the world for more than fifty years, but the question I’ve been dodging is…so what? What’s his point? Does he want us to just hurry the process up and knock ourselves off?

It goes back to those lines from “Song to Woody.” The world actually is coming along, but it’s sick, hungry, and tired. Everything isn’t broken. It’s fragile.

One of the original Greek meanings of “apocalypse” is “revelation.” Sometimes an apocalypse can be destruction; other times it’s a revolution and a rebirth.

Maybe that so-called revolution of the sixties—or any upheaval and tribulation—was a chance to find the path to victory and listen to those chimes of freedom. But those same upheavals can also cause those masters of war to tighten their grip.

We have a choice.

We can let the hard rain wash us away, or we can (to reference one of those apocalyptic basement tapes) be released.

Dylan writes about the end of the world not because he wants to dance in the rubble, but because he knows beautiful light can come from the sunset.

I see my light come shining from the west down to the east. 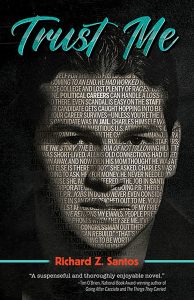 Richard Z. Santos is a writer and high school teacher living in Austin. His debut novel, Trust Me, was released by Arte Público Press in March 2020. He is a Board Member of the National Book Critics Circle and served as a non-fiction judge for the 2019 Kirkus Prize. ​He is also an Associate Editor for American Short Fiction. Click on the "My Work" page for links to many essays, stories, poems, reviews, and profiles. Before becoming a writer and teacher, Richard lived in Washington, DC and worked for some of the nation's top campaigns, political consulting firms, and labor unions. Richard has an MFA from Texas State University and has taught at Texas State, Georgetown University, and The University of the District of Columbia. He is currently seeking representation for his second novel: Every Family Is A Conspiracy Theory. 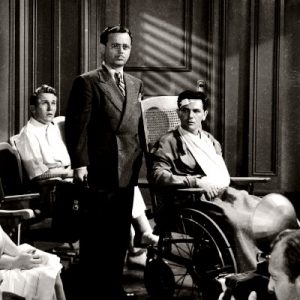 “There was a pause, while I fought against this other lesser kind of death that was creeping over me–this death called...
© LitHub
Back to top