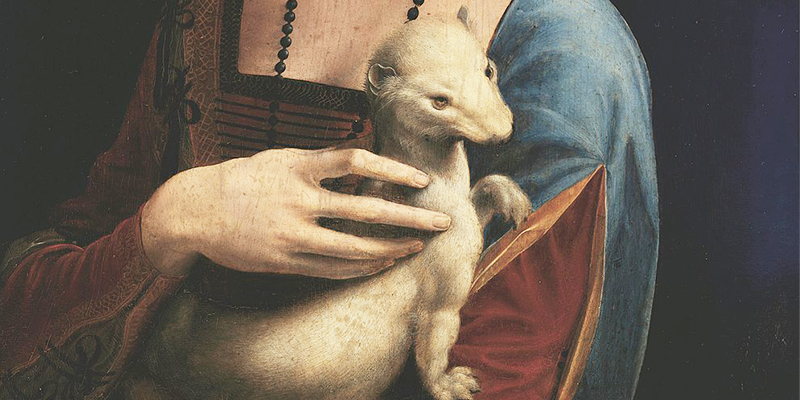 On the perambulations of Lady with an Ermine, one of Leonardo Da Vinci's strangest portraits.

It is often our subconscious self that underlies the decisions we make, and so it must have been with my far-reaching decision at a relatively young age to travel. That decision—more instinctive than cohesive—moved me off a single career path toward wide vistas of varied occupations. Every conceivable means of transport has taken me from one point on the map to another. Over the course of an unconventional career I have been a book publisher, the founder of a magazine, a corporate officer of a large multi-media company, and the chief-of-staff of a think tank operating in several international timezones and with a remit of global security. These decidedly different roles stationed me in New York, a city of sharp elbows and impossibly tall, glass towers; in L.A., an overly sunny place often considered foreign by Americans not living there; in Paris, claiming sophisticated and exceptional-looking inhabitants with consistently unfriendly attitudes;

in Brussels, populated by an increasing number of EU technocrats; in Beijing, choked by a solid mass of humanity and headache-inducing pollution; and, now, in London, occasionally emerging from the drizzle with the clever use of dry wit. Living and working in these places has enabled my current port of call as an author. A thinly disguised novel came first. Then a book written for Chinese readers on Western business practices, which was censored by the Chinese government before becoming a bestseller in the Mainland. Next was a memoir of the idosyncratic year spent living in China writing that book, which led to another nonfiction book on modern morality. It was travel, yet again, that brought me to the subject of my current book. During an afternoon spent at the art museum in Krakow—wandering from gallery to gallery—I came upon a darkened room in which hung a single, small, staggeringly beautiful painting.

Stationed by its side was an extremely serious-looking guard. Little wonder. Known simply as Lady with an Ermine, it is a priceless masterpiece by Leonardo da Vinci, one of only four portraits he painted of women. Aware of the portrait but unaware that it was in Poland, I couldn’t help but wonder how it got there. It was an utter mystery.

After retuning to London from Poland, I headed purposefully to St. James Square. On its northwest corner is the London Library whose slender edifice is deceiving: its interior pushes out beyond the building width and raises several more floors that are visible from the street and it houses more than two million volumes covering some twenty thousand subjects. Not much research was required there for me to realise that the portrait’s 530-year journey was so remarkable, it cheated fiction.

The government provided two days notice in early March before the strict COVID lock-down, which closed all non-essential stores and forbid anyone to leave his or her own home for anything other than food stores or medicine—and, even then, for only an hour a day. During that 48-hour warning, my version of hoarding toilet paper was to check out as many books as was possible at the Library. That first lock-down began in March and lasted into July. Left entirely on my own during that confinement, the days took on an existential drift.

In June, the library offered its members a lifeline: books identified on their electronic catalogue system and requested by email could be mailed. During the nation’s subsequent and less-onerous lock-down, the library was still closed but its skeleton staff—wearing surgical gloves—was allowed to retrieve books from the shelves and pass them to me over the front dest, protected with a newly installed wrap-around plexiglass protection.

History comes down to people, and my research enabled me to craft a story about the portrait’s journey by way of its disparate owners with whom I shared company. The first few numbered a cunning Milanese Duke likely to have murdered his seven year-old nephew for the title who commissioned the portrait; the portrait’s subject, a remarkable young woman renowned as much for her intellect as she was for her beauty; and of course the rare genius connecting them, Leonardo, who—even at his feverish pace, would have needed many lives in order to think out his thoughts to the end. Among the characters who would follow were Italy’s Cesare Borgia, whose ice-cold singleness of purpose inspired Machiavelli’s The Prince, Russia’s Catherine the Great, a masterful politician with extraordinary abilities to administer her vast country, and France’s Arsine Houssaye, who, being as he was extremely odd, bound one of the books he wrote—now owned by Harvard University—in human skin.

“Lost to view” is the dignified expression assigned by art historians to cover the over 250 mysterious years that the portrait vanished without a trace until its next recorded owner. She was an wilful Polish princess—a lethal combination of feminine charm and dynamite who counted as acquaintances Benjamin Franklin and Voltaire. It wasn’t only the characters in my book that filled my locked-down days and offered my dreams vividly foreign landscapes, there was the challenging task of tracking the portrait’s mysterious journey.

Against all odds, Lady with an Ermine endured a five-century passage through Europe, making its way across borders while nations and governments fell, while fortunes were built and squandered, while battles were won and lost, while begrudging political collaborations were agreed to and then often ignored, and while plagues and pandemics ravished. Exiled during the Poland-Soviet war to Paris’ Ile St. Louis, one of the few people who might have seen it hanging in the Hôtel Lambert was Fredrick Chopin. Returning to Poland, it was bricked up in a hidden cellar in advance of the German invasion and then discovered by the Gestapo on Hitler’s orders. Rescued after the war from a depot in Munich and deemed bourgeois under Stalin’s Communist reign, it was shut away in a warehouse until the the end of the Cold War when it seen for the first time in the West. It traveled—perhaps too much—until it came to a rest in the darkened museum room in Krakow.

While I had remained in one geographical location for two years, the five-century journey of a portrait that measures little more than 21” x 15” provided me with rich mental life. A young woman and her white ermine continued to prove their steadfast relationship with time by holding my imagination. 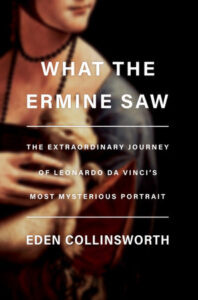 Eden Collinsworth is an author of, most recently, WHAT THE ERMINE SAW: The Extraordinary Journey of Leonardo Da Vinci’s Most Mysterious Portrait. 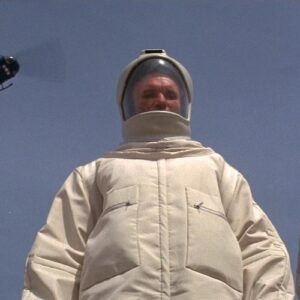 Biology is creeeeepy. At least, that’s the lesson I’ve learned from early readers of my new thriller, Child Zero, which...
© LitHub
Back to top