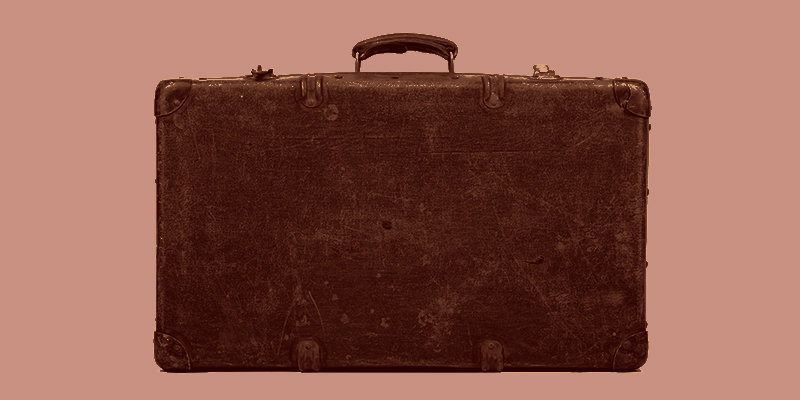 When writing my debut novella, Something Is Always Happening Somewhere, my goal was to make readers feel the sort of haunting, full-bodied mental and physical anguish I felt while grieving the loss of my mother, father, and grandmother. And based on some of the Goodreads and NetGalley reviews I’ve been getting for the book so far, which range in sentiment from “this was a beautiful depiction of grief,” to “I didn’t feel as a reader I need more misery. I was glad to finish reading in the end,” it seems like maybe I achieved that goal.

I lost my mom in 2013, my dad in 2017, and my gramma in 2018. That’s my core family right there, all gone in a relatively short span of time. Every sensory memory attached to my childhood, or the feeling of what it means to have a home, or a holiday, comes from those people, so when I lost them I felt as though I had also essentially died. Or if not an immediate death, that death was soon to come for me. That it was out there hovering, looming ever closer, waiting to finish what it started. My grief during these years felt like a supernatural force. I developed alopecia when my mom died, and even wet the bed once, something I hadn’t even done much when I was a baby. When my dad died I developed a rather unhealthy obsession with ghosts, and the general concept of death. I also started pretty heavily drinking. And when my gramma died, the woman who, along with my papa, I spent every summer with on their farm in rural Illinois until puberty reared its ugly head and called me to darker corners of my life, I all but laughed at the cruelty of it. By that point my body, and my mind, felt pummeled to the grave and back.

It’s hard to describe what this level of grief feels like, and I tried in many ways both conversationally, and in various essays and short stories I wrote in the years following, to pull what I felt inside out of my body and out into written word. As I wrote smaller things here and there I began to develop a toolbox of descriptions and themes that felt effective. I also found myself getting the stamina to write longer and longer pieces which, as someone who had primarily written for the internet, was a new skill for me. So I took all of this, everything I’d felt, and everything I’d learned thus far, and turned it into a book that, I think, packs a pretty hefty punch for its page length.

That’s the magic of writing. This book is upsetting people. It’s making people feel. And that’s all I wanted for this. In writing Something Is Always Happening Somewhere I, to put it crassly, hoped that people would one day  read it and come away from the experience feeling like shit. The story, the actual comings and goings within the book are just tools, moving sidewalks of sorts, to advance the reader through a kind of Disney’s Haunted Mansion ride experience of visceral sadness. And in the first cart of that ride is the book’s main character, Dale Travers.

When readers are first introduced to Dale it’s as she’s living the last little bit of normalcy she will ever know. From the moment she clicks the lock of the Jeep that will take her from work to the home she shares with her wife, Gina, she’s locked into that haunted ride I just described and nothing will ever be the same for her again.

When she arrives home, after making a quick stop to pick up Chinese food and wine that she thinks she and her wife will be enjoying together that night, as they have so many nights before, she’s instead thrust into her worst nightmare. From this point, through the rest of the book and up to the end, we experience life through her eyes as someone who has experienced the worst that it has to offer.

As the punching bag or, better put, embodiment of my own grief, Dale was crafted as a shadow. As close to the walking dead as a non-zombie character can get. After experiencing what she experiences at the beginning of the book (trying to not give too much away here) she pulls herself along reluctantly; doing the bare minimum required to advance through the days. In spurts she’ll reach for things that brought her comfort or pleasure pre-trauma, almost as muscle memory, but those things are no longer effective. She suffers at every moment of the day, and she looks forward to sleep, treasuring it as an opportunity to leave her body, and the world as a whole, behind. Although sleep brings with it a different kind of literal nightmare.

My hope was for readers to come to know Dale as they would a person watched from a bit of a distance through a window. Standing on a sidewalk looking across the way at a woman occupied with her own life. As you watch you begin to form a story about the woman in your head. That story is Dale’s whole life. Reader’s are meant to feel more about Dale than know about Dale, and anything concrete that they do learn about her is via what the character tells about herself directly via interior monologue, or brief and often tense conversations with others. You know her like you would the name of the perfume worn by the person who just left the room you just walked in to.

I’ve been describing Something Is Always Happening Somewhere as a visceral tale of grief with horror elements and I’ve seen a few reviewers object to the “horror” part. I’m now afforded the opportunity to object to their objection. This may not be a book about real ghosts, the kind that knock books off the shelves and rearrange furniture in the night, but I like to think it’s a haunted book all the same. The horror I was going for here is a description of the every day horror that threatens and torments us all. The kind of horror we find ourselves worrying about every time we lock the door when we leave the house, and every time we re-lock it coming home. This book is about the horror of true loss. And sadness. A true aching howl that there’s no escaping. For me, and definitely for the character Dale, there’s nothing scarier.

To close out, and if re-production rules allow, I’d love to share the opening passage of Shirley Jackson’s The Haunting of Hill House, which I would re-visit whenever I needed to get myself back into the intended mood of this book.

“No live organism can continue for long to exist sanely under conditions of absolute reality; even larks and katydids are supposed, by some, to dream. Hill House, not sane, stood by itself against its hills, holding darkness within; it had stood for eighty years and might stand for eighty more. Within, walls continued upright, bricks met neatly, floors were firm, and doors were sensibly shut; silence lay steadily against the wood and stone of Hill House, and whatever walked there, walked alone.” 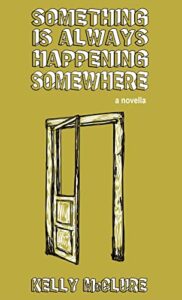 Kelly McClure is a journalist and fiction writer who lives in New Orleans with her wife Lindsey, dog Dracula, and two cats, Tokyo and Rocky. Her work has been featured in Vulture, The A.V. Club, Vanity Fair, Cosmopolitan, Nylon, Vice, and elsewhere. In 2017 Budget Press published a zine anthology of her short stories titled Terrible Stories. Something Is Always Happening Somewhere is her first book. 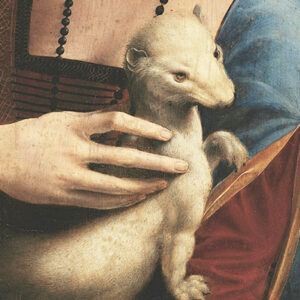 It is often our subconscious self that underlies the decisions we make, and so it must have been with my far-reaching decision...
© LitHub
Back to top