On a night in April 1957, the lean Western movie star Randolph Scott attended the Detroit premiere of his new film, The Tall T, based on a story by the bespectacled, crew-cutted young advertising man who stood beside him for a picture. Scott told the reporter from the Detroit Free Press that Elmore Leonard’s future looked promising if he could keep turning out stories “with a straight line and a small cast.” It was wisdom Leonard had already grasped, writing at his living room table each day from 5:00 am until he left for work at Detroit’s Campbell-Ewald agency, where he continued scribbling on a yellow pad hidden in his office drawer. While the top of his desk was given over to paperwork for the Chevrolet account, inside that drawer was a shimmery Apacheria of his imagination: parched southwestern landscapes thinly peopled with vaqueros or stagecoach drivers, raiding parties and cavalry units, dancehall girls and faro dealers, weary lawmen and bickering outlaws. Although Leonard would end up with “the Dickens of Detroit” on his headstone, at this point his literary focus was a long way from his own time and place.

Much of his best Western work is collected in a new Library of America volume, Elmore Leonard: Westerns (April), edited by the film critic Terrence Rafferty, who has provided a useful chronology of Leonard’s long career. The book includes half his Western novels and a strong sampling of the stories, from his first published, “Trail of the Apache,” to the famous “3:10 to Yuma” and later “The Tonto Woman.” (For a full sense of Leonard’s evolution, also seek out the 2004 book, The Complete Western Stories of Elmore Leonard). Even if cowboy literature, with its creaking leather and ringing spurs, is not your usual thing, these novels and stories herald the crime-writer he became. Crooks are crooks; mainly the landscape changed. As Greg Sutter, editor of the Complete Western Stories, explains, it was in writing his early tales about Apaches, Cavalry, and rustlers that Leonard developed his fondness for characters who were “good, bad, and really bad.” That formula would see him through, whether in Apache Junction, a Detroit alley, or the Everglades.

Leonard was originally no more a man of the West than was the Ohio-born dentist Zane Grey. While a kid in Detroit, Westerns enthralled him as they did most people in the 1930s and 40s. When he grew interested in writing during college Western fiction seemed a promising genre he could work in part-time. Unlike many writers then selling Western tales to pulps, though, Leonard insisted on accuracy, and kept a ledger of his research over the years, later crediting his longtime subscription to Arizona Highways magazine for many of his authentic descriptions. All had to be genuine: the guns, Apache terms and clothing; the frontier knives, card games, liquor, and especially the horses.

Leonard insisted on accuracy, and kept a ledger of his research over the years, later crediting his longtime subscription to Arizona Highways magazine for many of his authentic descriptions.

For readers of his later books, much should be familiar in these Western entertainments, with the respectful rivals on opposite sides of the law, failed heists and robbers whose loyalty proves weak on the run. (His outlaws have little honor, but they do accumulate regrets.) Often a mysterious woman turns up in Leonard’s Western stories who has been abducted and returned to life among the whites, or a man who was born Mexican but passes for Apache. Leonard likes outsiders, people brushed with otherness, or in the case of returned captives, double outsiders. In the novel Hombre, a recently liberated young settler woman shares the same tense stagecoach with other Anglo passengers and a Mexican-born man dressed like a Chiricahua. A white couple on the stage demand the man ride up top, and one of them can’t keep from asking the young woman about her time with the Indians, “Did they mess with you?”

What happens when captives return to their “own” people interests Leonard again and again, as in “The Tonto Woman,” where a wife lives in a cabin alone, banished by her rancher husband for the tatoo’d evidence of her Indian experience. Leonard favored Arizona and New Mexico for the region’s intersection of Apache and Mexican and Anglo cultures. (He liked that Apaches also used Spanish words, he said in an interview.) This gave him a three-sided conflict more interesting as a storyteller than the two-way fight on the Plains. One regional exception is his superb 1953 story, “The Big Hunt,” about a boy learning to become a buffalo hunter after his alcoholic father has died in a stampede. It begins:

It was a Sharps .50, heavy and cumbrous, but he was lying at full length downwind of the herd behind the rise with the long barrel resting on the hump of the crest so that the gun would be less tiring to fire…

After the boy, Will Gordon, fells and skins several dozen bison assisted by an alcoholic old man, the hides are stolen by the same passing crew that had sent his father to his death. The story turns on a dime to young Will’s revenge hunt after the thieves.

Corresponding with one of his writing heroes, the great sportswriter and novelist W.C. Heinz, in the spring of 1959 Leonard sent along one of his recent Western novels. Heinz wrote back, “I would like you to work at developing character through conversation—each person talks differently and so defines himself. You must be able to hear and see each character as he talks.” He certainly took this advice. For me, it is Leonard’s next novel, Hombre (1961) that finally rings out like his later work, somehow both loose and taut, with not an ounce of fat on its bones.

Like other excellent novels of the West— True Grit, Little Big Man, or Ron Hansen’s Desperadoes—Hombre is narrated by a pseudo-amateur writer. Young Carl Everett Allen prefaces his story by cautioning that he was “advised to imagine I was telling it to a good friend and not worry about what other people might think.” His story starts fitfully:

At first I wasn’t sure at all where to begin. When I asked advice, this man from the Florence Enterprise said begin at the beginning, the day the coach departed from Sweetmary with everybody aboard. Which sounded fine until I got to doing it. Then I saw it wasn’t the beginning at all.

You don’t have to care about the difference between a riata and a quirt, a Spencer or a Winchester or even Sam Bass and Bass Reeves to be intrigued by an opening like that. Soon the character the whites call John Russell appears, his face shadowed beneath a beaten straight brim hat:

That was John Russell, no older than I was at twenty-one and no more Apache than I was. Except he had lived with them—the wild free ones up in the mountains and the wild caught ones up at San Carlos—about half his life and that made the difference.

From his surly lack of talking, you sense that Russell is a man of action, and he does not disappoint. In true Leonard fashion, something happens that causes the white stagecoach passengers to go from kicking him out for his Apache appearance to begging him to defend them with his set of deadly skills.

Strangely, the very popularity of free Western TV shows (there were 26 in 1959 alone) slowly killed the Western movie and magazine market. Leonard wrote stories and novels until the early 1960s, then worked doing freelance copywriting and educational films until Hombre was bought and made into a movie with Paul Newman in 1966. Leonard then wrote his first non-western novel, The Big Bounce, returning now and again to his first love.

In 1970, Leonard expanded a story into the powerful revenge novel Valdez is Coming. It features an apparently “kindly” Mexican-American constable and stage-line shotgun rider, Bob Valdez, who has only enough authority to round up drunks in the Mexican section of his Arizona town. After he is forced to kill an innocent man in a situation he did not create, Valdez tries to raise funds for the dead man’s pregnant Apache widow; the reaction from a criminal rancher and his gang is violent and ugly, sending the constable on his way beaten and with his arms lashed to a wooden cross he must carry into the desert. Valdez is pushed too far, as they say, and turns out to have a past guiding for General Crooke chasing Geronimo. After his long fuse is burned down, he wages a righteous one-man campaign around the canyon.

When his old friend the town Madame sees Valdez preparing for battle by doctoring his shotgun shells with tallow, she realizes the transformation is underway from genial constable back into warrior.

He smiled back at her. “Bob is easier.”

Just a little war, if he wants it,” Valdez said.

As with his many other adaptations (Get Shorty, Out of Sight, Be Cool, Jackie Brown), some Leonard Westerns received the movie they deserved and some did not. (His 1953 story “3:10 to Yuma” has been filmed twice, with differing results; Burt Lancaster may not have been the perfect choice to play Roberto Valdez.) Then, late in life, came his 2001 novella set in modern Western Kentucky, “Fire in the Hole,” which begins:

They had dug coal together as young men and then lost touch over the years. Now it looked like they’d be meeting again, this time as lawman and felon, Raylan Givens and Boyd Crowder.

The rivals plot one last, glorious time: Both of them sons of local criminals who grew up among miners and moonshiners, Crowder seeks to continue in the family tradition. So what keeps Raylan Givens from crossing to the Crowder side of life? One factor seems to be his embrace of an old-time lawman’s code as a deputy U.S. Marshal. He does not live in the historical West, yet Givens wears a Stetson on the job and challenges criminals to old school duels in the street. At one point, he gives a drug boss 24 hours to leave the county. For Givens, belief in himself as a kind of frontier figure allows him to do his very dangerous job.

This 56–page story inspired the superb FX series Justified, which combined all sides of the master –Leonard’s gallows humor, vivid bad guys of varying intelligence, self-deprecating lawmen. Until his death in 2013 Leonard served as executive producer while Justified’s creator Graham Yost kept the show’s writers focused by giving them reminder wristbands that read “WWED” (What Would Elmore Do?). For Leonard, like his creation Raylan Givens, the West was serious business, a habit of mind, no matter where or when you were born. 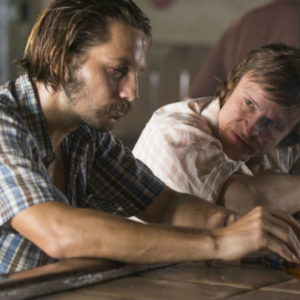 The aftermath of collective trauma tends to bring out the best in crime fiction. A reasonable crime reader might very well...
© LitHub
Back to top